The new Fisheries Regulation that government intends to implement on July 1st have fishing communities in northern Belize and Caye Caulker up in arms. The new regulation, found at https://bit.ly/3yw2hLn, will prohibit fishers from capturing lobsters with a tail weight of less than 4.5 ounces. Currently, the tail weight regulation is four ounces. The law will change the number of traps allowed per fisher and fishing areas. For instance, in Caye Caulker, the fishermen claim the new legislation will affect their livelihoods. They said to have requested a meeting with Area Representative Honourable Andre Perez without success. However, Perez said that he has met with the Caye Caulker fisher-folks and will meet with them next week for a second time. 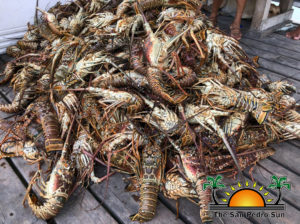 According to Perez, he met with them on March 9th to discuss the matter. Perez, who is also the Minister of the Blue Economy and Civil Aviation, added that he would also meet with the fishing community of Sarteneja in the northern Corozal District. Perez stated that while the changes may bring new challenges, there will be long-term benefits for both the stock of lobster in the sea and the export of this marine product. Currently, the United States of America is Belize’s leading consumer of lobster, and they require a minimum of tails weighing five ounces.

Acting Administrator of Fisheries Rigoberto Quintana said that in 2009 Belize signed a binding agreement with the Organization of Fisheries and Agriculture in Central America (OSPESCA) to change the required sizes for lobsters, the gap for lobster traps, and the number of traps allotted to fisher-folks. According to him, that same year, OSPESCA wrote to the Government of Belize inquiring why there were delays in implementing the new regulations. The then administration requested an extension until December 2022. The current administration had to comply with the agreement. Quintana noted that consultations surrounding the changes were held with the different cooperatives as early as 2013 and in recent months. However, the fishing community is not accepting the new fisheries rules. 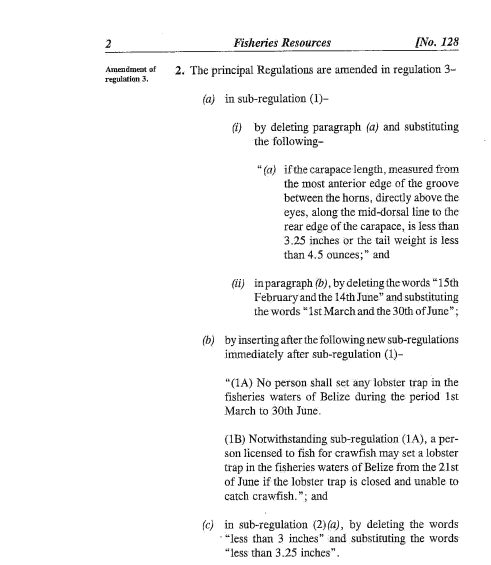 In Ambergris Caye, a couple of fisher-folks claimed there had been no consultations. They believe these are very important because new laws that are not well planned can have consequences. They hope the respective authorities can better approach the situation because such new legislation could hamper the upcoming lobster season.

Meanwhile, in Caye Caulker, the 2021 Fisher of the Year, Hicaqueña Maria Allen is spearheading an initiative to challenge the new law and has collected over 200 signatures from fellow fisher-folks. She said the new regulations would be a heavy blow to their livelihoods in La Isla Cariñosa. “In regards to the 4.5 ounces, which is the new size for the lobster in the new regulation, we do not get these sizes of lobster throughout the season, so that it will affect us negatively,” she said. Allen mentioned that lobsters with a tail weight of 4.5 ounces are usually collected at the beginning of the season. Afterward, it is challenging to find lobsters of this size.

To harvest the new authorized lobster tail size, fisher-folks say they will have to go farther out at sea. This means less production and an increase in expenses such as fuel. As a result, they warned the market that they could expect less product and would need to pay higher prices because of the difficulties they claimed the new regulations would bring to their fishing trade. The fishing community is asking for the respective government leaders to meet with them and consider that while the new law may work in some country areas, it will be difficult in places like Caye Caulker.

While the new law is to come into effect in less than two months, fisher-folks say they will continue showing their discontent with the new regulations. To add to their argument, they claim the new law is not supported by any studies. Quintana from the Fisheries Department reportedly said that no research was conducted to evaluate the lobster stock in the country.