On Wednesday, February 3rd the first ‘Fishing Managed Access Program Consultation’ was held in San Pedro Town at the Lions Den. Spearheading the gathering was commercial fisherman and tour guide Alfredo Rubio, whose purpose was to try and organize an association and start the recruitment of members for a local committee in order to manage the fishing area around Ambergris Caye. The meeting started shortly after 6:30PM and saw a handful of persons who welcomed the initiative to establish a fishing association in San Pedro.

The program began early this year with a series of meetings that ended open access fishing across Belize’s marine ecosystems by licensed commercial fishermen. The program is set to be implemented in every coastal community in the country, with each area forming a Community Managed Access Committee. Rubio is currently making the efforts to organize a committee on the island after he was appointed as the president of the San Pedro Committee in December of last year by the Belize Fisheries Department to spearhead the program in Ambergris Caye. At the first consultation/meeting no members were selected. Rubio is seeking six members to form the committee and he expects this to happen in the upcoming meetings. “It is important to standardize our fishing practices in San Pedro, so we can have more resources from the sea and fishermen don’t have to go far from the island to fish. When this program is implemented and we have the committee and association established, fishermen in San Pedro will be see a difference and be able to catch their sea products right in front of the island. Why? Because we will be enforcing sustainable fishing which will safeguard our future and dependency on fishing. But first, we need to find committed community members to form the committee. That is the first vital step, to have a strong foundation,” said Rubio.
Upon the establishment of the association, licenses for commercial fishing will be given by this entity only with strict scrutinizing so island fishermen can always have first preference. In addition, fishermen from other communities will not be allowed to fish around Ambergris Caye waters and the program demands that every fishermen license clearly defines in which areas they can fish. 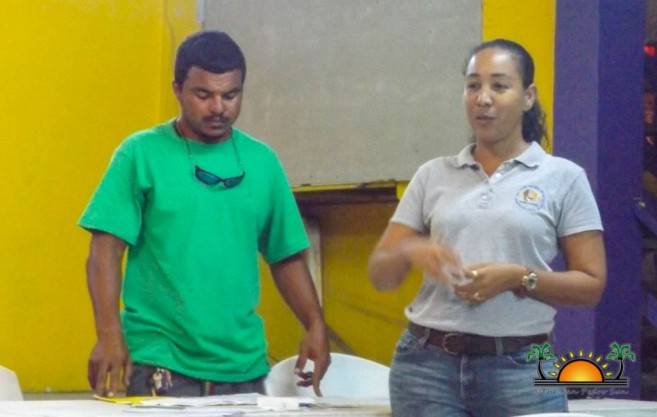 The attendees at the consultation look forward for the initiative to start, but they had concerns about how it will work. Enforcement was the main issue raised by the attendees; all tour guides and fishermen. They were informed that, with the division of the fishing grounds, it will allow the Belize Fisheries Department to better regulate fishing laws and protect the local fishermen affairs. It was advised that the Hol-Chan Park Rangers will also be available to offer assistance in enforcing the zoning program and any fishermen caught fishing in unauthorized zones belonging to Ambergris Caye can be reported to Hol-Chan.
Rubio stressed, that once the association is formed, members will be required to be very active and attend all meetings pertaining to the association. The vision for standardization also aims at fighting illegal fishing around the island and safeguarding the fishing industry for future fishing generations. Rubio thinks it might be a tough task, but at least it can be minimized, and certain species of fish can be saved.
A series of consultations are scheduled for the following weeks, before a committee can organize and an association established. Rubio expects to hold another consultation session within the next two weeks, but in the mean time anyone interested can contact him at 635-4224.