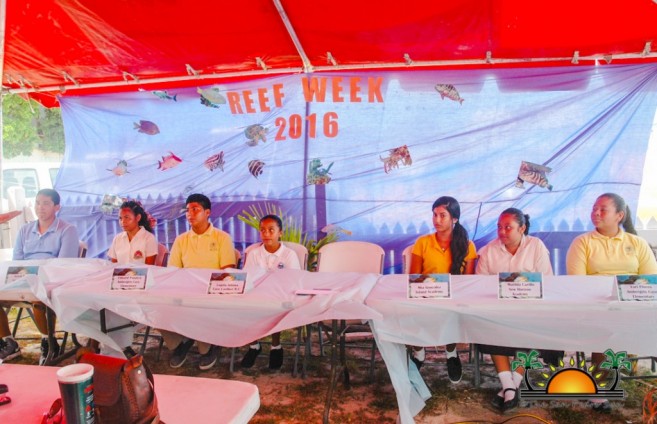 After a short intermission, the judges deliberated and students who had 10 points qualified into the second round. Flores, Polanco, Ruiv, and Ancona were the top four competitors, and each of them were asked two intermediate questions that reflected the establishment of Hol Chan, the size of Hol Chan, what threatens sea grasses in Belize, the highest rate of radiation for sea turtles, and how much of Earth is covered with water.

In the third round, Ruiv, Ancona, and Polanco made it to the final stretch, where they were asked three intense questions. Some included questions about mangroves, species of sea turtles in Belize, and the purpose of marine reserves in Belize being established as fisheries management tools. After students offered their responses, a puppet show performance took to the stage while judges made their final decision. Since there was no tie-breaker, the judges announced the winners of the contest. New Horizon’s Astrid Ruiv was the lucky first place winner, and she took the grand prize of a roundtrip ticket courtesy of Tropic Air, a 7” Samsung Galaxy Tablet, a backpack filled with school supplies, an engraved trophy, and $600 will be donated to her school. In second place, Island Academy’s Ethan Ancona also received a 7” Samsung Galaxy Tablet, a backpack filled with school supplies, and an engraved trophy. In third place, ACES Edward Polanco to a prize of a backpack filled with school supplies and a $50 gift certificate to A&R. All eliminated contestants who participated were given a t-shirt from Hol Chan. All winning students were awarded their prizes at Hol Chan’s Reef Fair on Thursday, May 19th.

Hol Chan greatly thanks all students who participated, the schools who attended, and their teachers. Here is to another successful trivia contest next year!

The Government of Cuba Awards Medical Scholarships to Belizean Students