A lionfish tournament took place on Monday, May 16th at Estel’s Dine by the Sea to celebrate the 11th Annual Northern Reef Week. Hol Chan Marine Reserve encouraged all tour operators, tour guides, and divers from dive shops on La Isla Bonita to participate in catching as much of the beautiful, but invasive fish to help reduce its population in our waters. A total of five teams registered for the tournament: the Dive Bar, Lionfish Snipers, Belize Diving Adventures, Team Amigos Del Mar, and Hol Chan.

Lionfish are voracious eaters that are not only a threat to the reef, but to all of the seafood we love to consume. Since lionfish are not native to Belize, they gobble up all of our precious juvenile lobster, conchs, crabs, and fish before they can mature. The unfortunate news is that lionfish do not have natural predators, especially since their fan-like spine contains venom. Although the lionfish poses a critical risk to the ecosystem, less lionfish have been spotted at popular diving/snorkeling sites. Hol Chan stated that the decrease of lionfish is due to the efforts done over the years by the many dive operators to control the lionfish population. 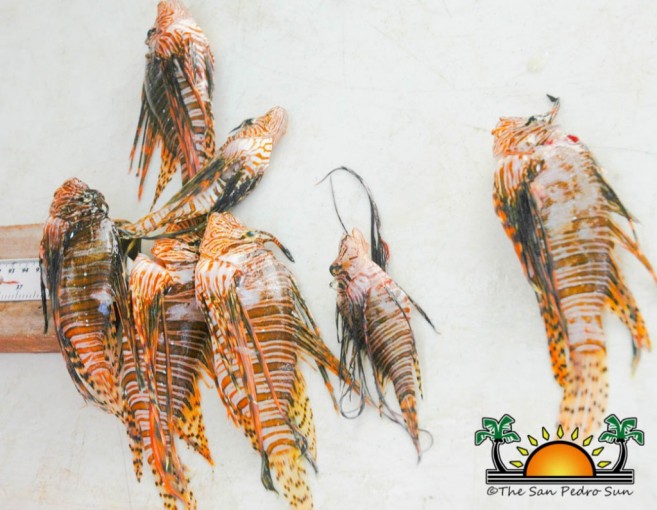 The tournament was an excellent opportunity to raise awareness on the invasive species, while encouraging its removal from the waters. The teams had until 5PM to bring in their catch, and as early as 4PM, teams started arriving with coolers packed with lionfish of all sizes. The fish was then counted, weighed, and tracked in order for prizes to be awarded.

After tallying points, The Dive Bar took the first place cash prize of $1,000 with 175 lionfish caught. They also won a 15-gallon gas voucher for winning the largest catch of the event, with a lionfish measuring a little over 15 inches. Coming in at second place was Team Amigos Del Mar, with a catch of 100 lionfish, winning $750 in cash. The third place cash prize of $400 went to the Lionfish Snipers who caught 31 lionfish. Everette Anderson from the Belize Diving Adventures won the remaining 15-gallon gas voucher for the smallest catch, with a lionfish measuring only a little over three inches. At the end of the event, the total count of lionfish removed from the reef amounted to 344. 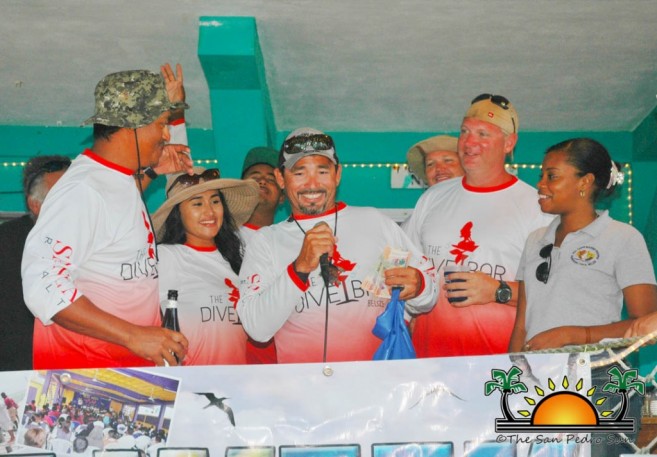 All of the prizes were sponsored by the Blackadore Caye Development group. Since the group is becoming more involved with Ambergris Caye, they support keeping the reef clean and healthy. According to Valentine Rosado, Independent Consultant with the Blackadore group, San Pedro’s tourism industry revolves around the sea. “It is important for us to step up because the health of the reef is important, especially when it comes to diving. If the reef’s health is poor, it impacts the quality of the tour,” said Rosado.

Dianira Enriquez, a local crafter, traveled from Caye Caulker after hearing about the tournament. She saw the perfect opportunity to utilize parts of the lionfish that are typically thrown away. Enriquez recycles the spines, tails, and fins of the fish to market lionfish jewelry and souvenirs along with other women in Belize City. “We make jewelry so the lionfish’ value increases, and gives people motivation to catch them. We also do this to save our reef, because without it, we won’t have a promising future,” said Enriquez.

Organizers of the event would like to thank the San Pedro Tour Guide Association, the San Pedro Town Council, the Belize Fisheries Department, Estel’s Dine by the Sea, the Blackadore Caye Development group, all participating teams, volunteers, and everyone who came out and supported the cause. All lionfish caught was fileted, and stored to be donated to the Saga Humane Society for a fund raising event. The Lionfish Catch fund raiser will be held at Pirates Treasure on Friday, May 20th, where a Chef’s Table Tasting Menu will be offered. Saga invites you to come out to Pirate’s Treasure, and sample Chef Maresha’s delectable dishes that star the lionfish’s versatility.