The Government of Belize will be investing $15.8 Million over the next two years to protect the valuable resources of the Chiquibul Forest Reserve from illegal logging and poachers from across the border, Minister of State Hon. Omar Figueroa announced at a press conference at the Biltmore Plaza Hotel in Belize City Tuesday afternoon, August 23. 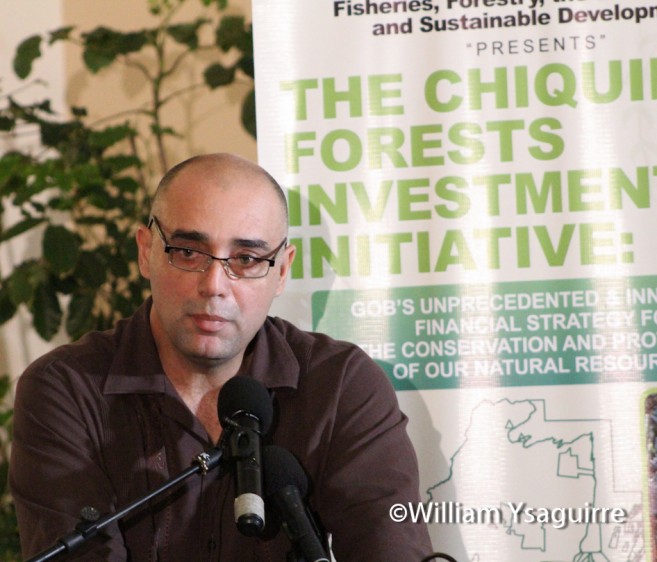 The Ministry of Agriculture, Fisheries, Forestry, The Environment and Sustainable Development, and Climate Change was launching its Chiquibul Forest Investment Initiative, when Figueroa spoke. He said he had already sourced $2.5 Million of that $15.8 Million to come from the Protected Areas Conservation Trust (P.A.C.T.) and the Environmental Management Fund (EMF). But to make it sustainable, he proposed to raise the $3.75 conservation fee paid by visitors to US$20, as part of the departure tax which goes into the Environmental Management Fund. To begin the process, he said the P.A.C.T. Board of Directors has approved for a “Willingness to Pay” survey to be conducted among visitors to determine if they would be willing to contribute to the preservation of the natural attractions they have enjoyed in Belize. 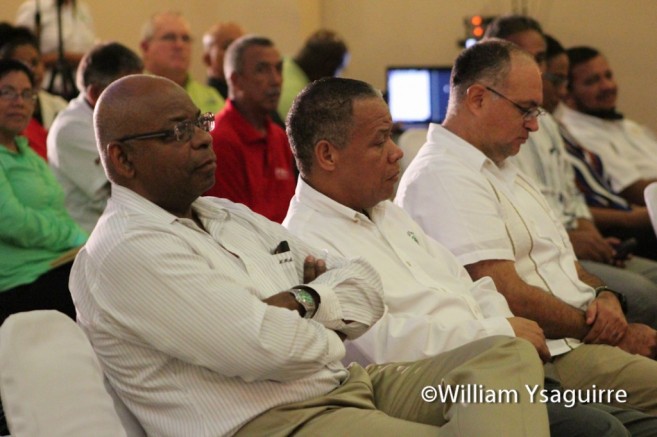 The $3.75 fee has not been increased in the 20 years since it was introduced in 1996, Figueroa argued, and just allowing for inflation, it should already have increased to $8.62; which would have contributed an additional $3.6 Million in annual revenue to the P.A.C.T. at 2015 visitation levels. Increasing the departure fee to US$20 would add Bze$14.4 Million for PACT’s earnings each year, which is $12 Million more than it presently earns from the conservation fee paid on departure.
Figueroa admitted he did not know how favourable the survey would be, but he was willing to recommend to Cabinet to invest an additional $2 Million in the Chiquibul forests each year from the P.A.C.T.; and this funding could be used to leverage matching funds from government’s partners and other international agencies which fund conservation.

Christina Garcia of the Ya’axche Trust describes the many challenges

Chief Executive Officer Colin Yuong Ph.D. of the Ministry of Forestry and Fisheries also chairs the Board of Directors for both P.A.C.T. and the EMF, which will contribute $2.5 Million to pay for two additional conservation posts to be built, and for access roads to be built to the conservation posts to ease the entry and exit of the rangers and other security personnel during staff rotation. Part of the funds will also pay the next two years of salaries for additional rangers for the Friends of Conservation and Development (FCD), the Ya’axche Conservation Trust (YCT) and the Forest Department. It will also cover transportation costs and procurement of necessary equipment for the Belize Defence Force, Forest Department, the FCD and YCT.
This will also pay for the training of the co-managers and the staff of the regulatory agencies, and to buy communication equipment. Although the BDF has recently acquired three helicopters, the cost of fuel and maintenance spares to keep the helicopter air-worthy make frequent fly-overs costly, so part of the funds will buy remote-controlled drones for more regular fly-overs to lower the cost of monitoring the forests more effectively.

The Forest Investment Initiative will also be investing another $6.5 Million, of which the FCD and Ya’axche Trust will be contributing $900,000 in co-financing. Government partners will be contributing matching funds, and Figueroa itemized approximate figures for the distribution: approx. $700,000 for Friends of Conservation, $400,000 for Ya’axche Trust, $600,00 for the Forest Department, and $600,000 for the B.D.F.
The Initiative will also leveraging another $8.8 Million from other partners, Figueroa said. Because of the importance of the forest’s many attractions for the tourism industry, $3.4 Million will come from the Sustainable Tourism Project II (STP2), which is funded a loan from the Inter-American Development Bank. STP2 will also be investing another $2.8 Million in the Mountain Pine Ridge, which is not part of the Chiquibul – strictly speaking- but forms an important gateway to the Chiquibul.

Chief Executive Officer Yashin Dujon of the Tourism ministry chimed in about the importance of the Chiquibul as a tourism destination, and the present difficulties that tour operators face in ensuring the safety of their guests and of the need to improve security in the areas which might attract tourists. In this he was supported by John Morris Ph.D. of the Institute of Archaeology, who stressed the importance of preventing the looting of artefacts from all Mayan sites, which represent an intrinsic and irreplaceable part of Belize’s cultural heritage, which adds to the tourism product.

John Morris Ph.D. of the Institute of Archaeology

Another $3.6 Million will come from projects funded by the United Nations Development Programme (UNDP) and the World Bank – such as the Key Biodiversity Management Areas, the Reduction of Emissions, Drought and Desertification project (REDD+), and from the project for Capacity Building for Strategic Planning and Management of Natural Resources. Another $1.8 Million will come from the National Institute for Culture and History (N.I.C.H.) and the Institute of Archaeology, for investment in the Caracol Archaeological Reserve. The UNDP Small Grants Program also came on board with $100,000 to fund the FCD’s work in the Vaca Forest Reserve.
The various conservation partners have excellent baseline data which will help to assess the cost effectiveness of the investment, Figueroa added. He also expressed the hope that this sizeable investment would also leverage additional funds from other partners who may wish to participate in this conservation effort. 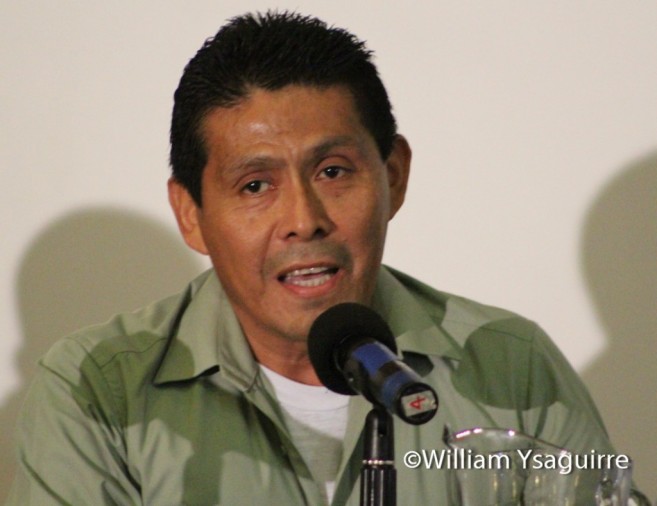 Figueroa explained that these investments are intended to protect Chiquibul against many threats. FCD Executive Director Rafael Manzanero and Christina Garcia of the Ya’axche Trust described the many challenges their park rangers face in protecting against illegal logging, illegal gold mining, poaching of Xate and other non-timber forest products, poaching of many species of wildlife and illegal wildlife trade, foreign farmers clearing patches of forest to farm on Belizean land, and the looting of archaeological artefacts from Mayan sites buried under the forest cover.
The Chiquibul forests extend from the Vaca Forest Reserve in the north, the Chiquibul National Park, the Caracol Archaeological Reserve, Bladen Reserve and the Colombia Forest Reserve, encompassing 1.22 Million acres of land – 22 percent of Belize’s land mass! In it lie the headwaters of both the Macal and Mopan Rivers, which flow into Guatemala and return to empty into the Belize River; they represent a hydrological resource estimated in 2010 to be worth $1.3 Billion to Belize over a 30 year period.

Belize Defence Force commandant, Brigadier General David Jones explained that protecting the Chiquibul is no easy task; as it has a 45-kilometer border with Guatemala, which is difficult for the BDF to patrol. The BDF has spent $2.9 Million each year in salaries, fuel, rations and equipment for its officers to man four conservation posts in the Chiquibul, and with two additional conservation posts to be built, it will cost the BDF $4,156,205 to man six conservation posts over the next two years. Both Manzanero and Jones said it was important to have more boots on the ground; as they had noticed diminished incursions in the areas near the conservations posts where there are regular patrols; but that the interlopers had adapted to the BDF presence and simply shifted their scope of operations to those more inaccessible areas which were not regularly patrolled.

SPTC to hire temporary workers to help deal with influx of sargassum; SPTC to hold a community meeting addressing the issue