« Older: Police Brutality suspected in the death of island bartender
Newer: » Charges yet to be laid on Alida Barrientos de Catzim over the murder of her husband


A Guatemalan Nation who illegally entered Belize was shot on Thursday, March 3rd by a member of the Belize Defense Force (BDF) following the discovery of a marijuana plantation within the Chiquibul Rainforest Reserve in Belizean territory. According to reports, members of the BDF along with Friends for Conservation and Development (FCD) rangers where conducting scheduled patrols in the area when they came across the plantation. As the team approached the area, they were met with gunfire, which resulted in the BDF firing back and injuring one man. The BDF proceed to capture the culprit identified as Guatemalan National from Peten, 51-year-old Francisco Torres Sucup, who received a gunshot to the knee. 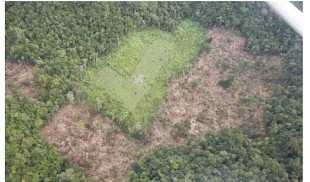 The BDF also reported that while one of the culprits was detained, another man, later identified as 56-year-old Luis Diaz Alballeros, escaped during the crossfire but was later captured. At the plantation, the team searched a thatched shed where they found 15 live 12-gauge cartridges and 24 live rounds of 9mm ammunition. Two illegal weapons, a 9mm pistol and a 12-gauge shotgun, were also confiscated from the men.
After securing the two men, the team proceeded to destroy the marijuana plantation before returning to the San Ignacio Police Station. Due to the remoteness of the plantation, the team did not arrive to the San Ignacio Police Station until Saturday, March 5th. Sucup was taken to the community clinic to receive medical treatment before being formally arrested and charged, along with Alballeros, for immigration offences.
Prime Minister Right Honorable Dean Barrow has also commented on the incident. “These Guatemalans were found in a marijuana field on our side of the border; that when they were accosted, they opened fire and the patrol returned fire and one was shot and the other was apprehended. While you never know from one moment to the next how much of Belize the Guatemalan’s are claiming, there are confidence building measures, protocols, that govern what happens on the ground, but there are no such arrangements with respect to the Chiquibul, and that’s causing problems. They [the Guatemalans] must also be aware of what’s happening in the Chiquibul and know that in terms of the security patrols, there’s always the possibility that something like this will happen,” stated Barrow.
Both men were arraigned on Tuesday, March 8th before the San Ignacio Magistrate Court where they were remanded to the Belize Central Prison. At this time, Sucup and Alballeros are only facing immigration charges but are expected to also be charged for the shooting, illegal marijuana plantation and the illegal firearms and ammunition found by BDF.

Wanted teenager turns himself in to Police