Many garbage transfer stations across the country were affected after PASA Belize Limited suddenly informed the Belize Solid Waste Management Authority that they were ceasing operations as of Monday, January 9th. This included the transfer station on Ambergris Caye, which was unable to ship out its waste to the mainland. However, two weeks later, the Ministry of Agriculture, Fisheries, Forestry, the Environment and Sustainable Development has announced that while the situation with PASA is being sorted, the Ministry is ensuring that solid waste is transferred off the island. 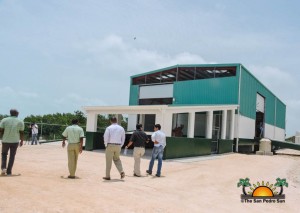 The announcement was made via a press release on Friday, January 20th, informing all affected municipalities that the transfer of solid waste from the respective transfer stations is on-going. On Ambergris Caye, local authorities had been monitoring the situation, and although the station on the island could not get rid of its waste, it continued receiving garbage.
Mayor Daniel Guerrero had indicated that while they were closely following the matter, the garbage collection on the island would continue as per normal. He did not speak of any changes at the time, and disregarded any immediate impacts on the island, however he anticipated possible alternatives for garbage disposal if necessary. “If the transfer station on the island stops receiving our garbage then we will have to turn back to what we used to do before; burn the garbage,” said Guerrero.
Guerrero is pleased that the station will continue its normal operations. “A solution had to be sorted out sooner than later,” he said. “Our garbage collection was never affected on the island. At the moment, we are continuing our works to keep the island clean. We are expecting to acquire an additional garbage compactor in order to keep up with the trash issue.” Guerrero expects the additional trash compactor to be on the island in less than two months.
In the meantime, the Ministry and the authorities of the Belize Solid Waste Management will ensure that solid waste continues to be received at all transfer stations across the country. The opening hours are from Monday to Friday from 8AM to 5PM, while on Saturdays the station opens from 8AM to 1PM. An agreement has not yet been finalized with PASA.

Lionfish jewelry: A creative solution to a continuous problem