« Older: It’s an Island We Have to Keep Clean!
Newer: » Editorial: Are you going to be the one who trashes our island?


The long awaited Solid Waste Transfer Station, located on Marina Drive, was inaugurated on Friday, July 3rd in grand fashion. A project of the Belize Solid Waste Management Authority (BSWMA) and funded by the Inter-American Development Bank (IDB), the San Pedro transfer station had been under construction since 2013 and is one of four transfer stations built across the country. The transfer station is expected to alleviate the major issue of improper garbage disposal by allocating a venue for collecting and sorting garbage before being barged off of the island to the mainland. 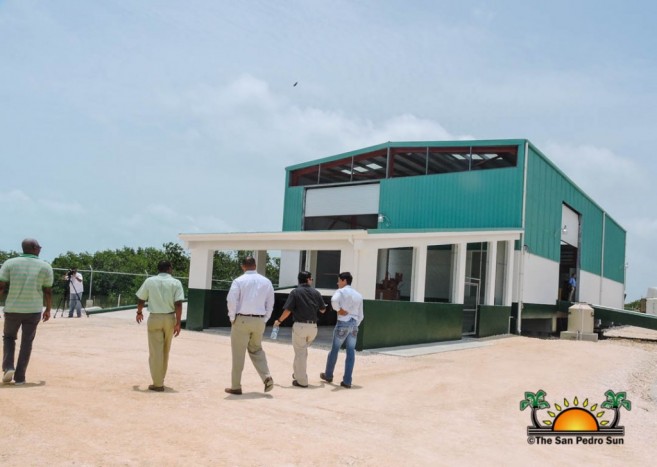 The inauguration ceremony was held shortly after 11AM with San Pedro Mayor Daniel Guerrero, Deputy Mayor Gary Grief, Minister of Tourism, Culture and Civil Aviation Honorable Manuel Heredia, Minister of Natural Resources and Agriculture and Deputy Prime Minister Honorable Gaspar Vega and Chairman of BSWMA Nolan Michael. The transfer station is a processing site where the garbage (solid waste) will be temporarily deposited and sorted, before being transferred to a larger waste disposal site on the mainland. Opening the event was Pastor Clive Welsh, who delivered the invocation.

Guerrero officially welcomed those in attendance, expressing his gratitude over the realization of the project. He also took the time to share a brief evolution of waste disposal in San Pedro Town. “Only through realizing that garbage is a major problem can we come up with solutions to solve the issue. This garbage transfer station will greatly benefit the community. It is without a doubt that we are headed into the direction of cleaning up the island. But still, we need the collaboration of every single resident and even visitors to do their part in keeping San Pedro clean. The San Pedro Town Council (SPTC) will continue working with the relevant authorities to ensure that the issue of garbage is eliminated,” said Guerrero. 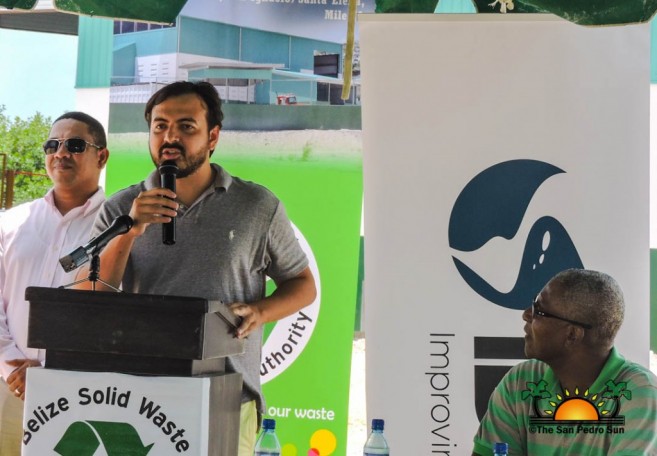 Also speaking at the event was Greif, who stated that the completion of this project will be one that will benefit the island. “Tourism is the backbone of San Pedro and unsightly garbage can affect the product that we offer. With the completion of the transfer station, people flying over the island will no longer see the plume of smoke from the burning garbage from the dump site. This is a huge upgrade, one that will benefit everyone and hopefully make the island have a healthier and more beautiful environment,” said Grief. 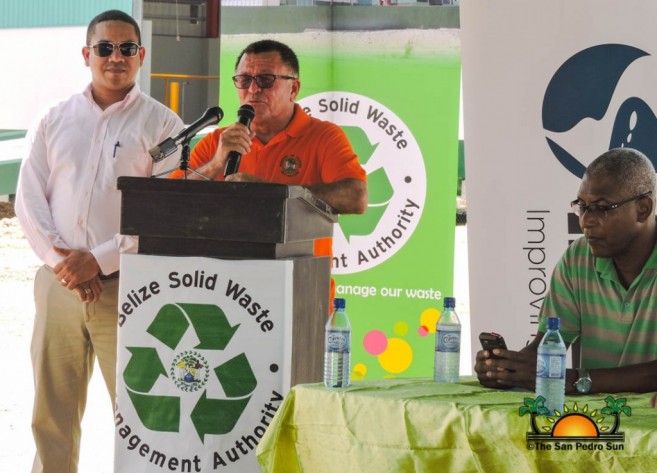 Hon. Heredia emphasized the rapid growth and development of the island and how garbage needs to be addressed immediately in order to prevent adverse effects. “It was the vision of GOB to give the island something that was urgently needed. We should be proud and grateful for this accomplishment for now we have a solution for our growing garbage issue. We needed a proper garbage disposal. We have received many complaints from tourists on garbage. But it is up to us to solve that, and it is one that we must address. We need to make sure we maintain this island clean. We will be working together with local authorities to make sure there is a cleanup campaign and educational awareness on garbage. We need to achieve a proper environment for our tourist and residents,” said Heredia. 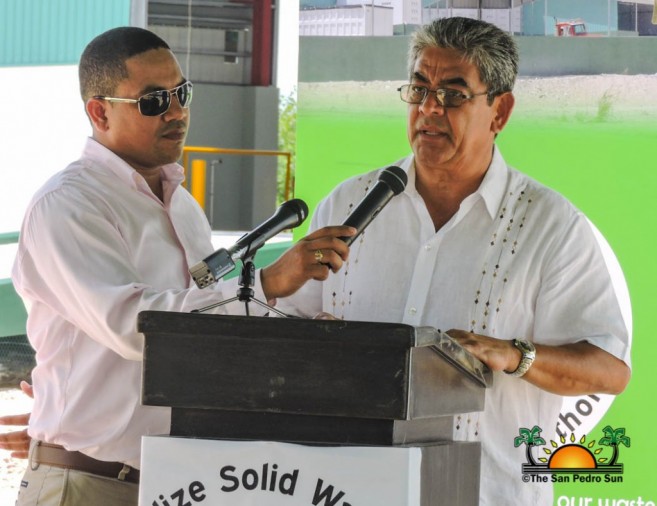 Giving the keynote address was Hon. Vega, who mentioned that the San Pedro transfer station was a long time coming and he is glad to see the completion of the project. “It is a great honor to inaugurate this significant milestone for San Pedro. This project reflects the commitment of our government to tackle the issue of improper waste management by tangibly and visibly investing in waste management infrastructure and assets that will contribute to delivering improved quality of life to residents and tourists. We hope to protect San Pedro’s terrestrial and marine environment by addressing the issue of garbage,” said Vega. He indicated that the project will see environmentally sound garbage disposal that, in the longer run, will alleviate the burden of improper solid waste disposal in San Pedro. “With this transfer station, we will be eliminating several problems beside just improper disposal. No longer will there be air pollution from the burning of garbage, nor water and land pollution from the seeping of hazardous materials in to the island’s water sources and land masses. It is estimated that this San Pedro transfer station will be receiving between 15 to 20 tons of solid waste daily. We need to improve the assets of San Pedro and increase its value and getting the island clean is the way to go. Belize has made tremendous progress in solid waste management. We need all hands on deck, as ultimately, improper solid waste disposal impacts everyone in the short and long term,” said Vega. He ended by stating that the GOB hopes that cleaning up the island would better San Pedro’s tourism product. 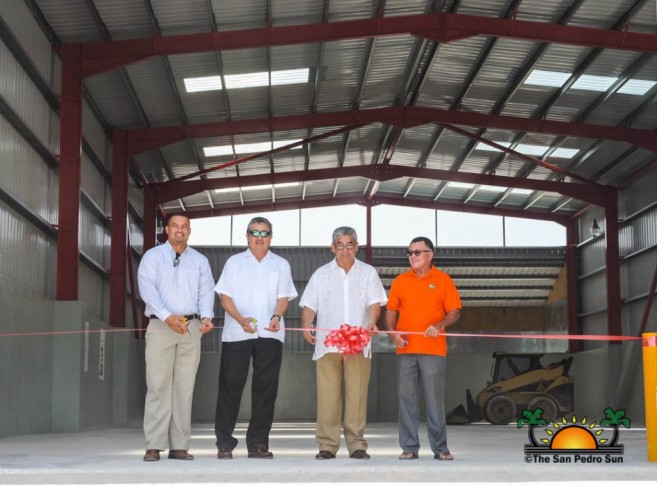 Nolan Michael delivered the vote of thanks address, which was followed by the official ribbon cutting at the main building of the transfer station. Michael expressed a heartfelt thank you to the team that made the project a reality from the conceptual designers, architects, engineers to the construction workers and everyone who was a part of it. “I remember visiting the site about four to five years ago when we promised to deliver this facility. We have now delivered and no longer will the residents of San Pedro Town be subjected to an open dumpsite in such proximity to the Belize Barrier Reef. Guests and residents will now have proper and tangible environmental health and social benefits of having proper sanitary disposal of their garbage,” said Michael. 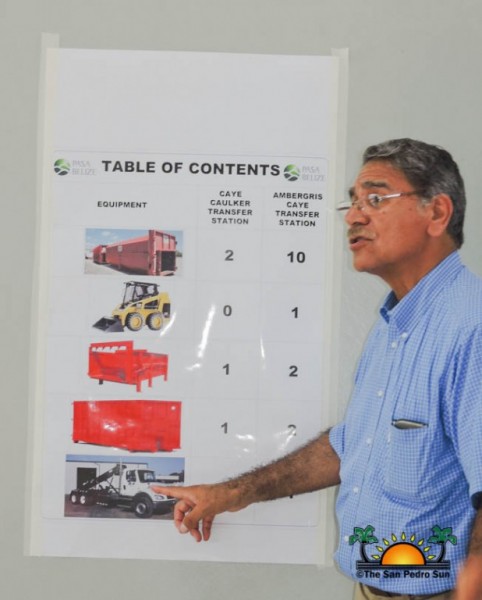 As per usual, garbage will be collected by sanitation workers on a daily schedule, but instead of being taken to the dump site, it will be taken to the transfer station where the waste will be deposited on a concrete floor area known as the “tipping” floor. Recyclable materials such as polyethylene terephthalate (PET) bottles, high-density polyethylene (HDPE), glass, aluminum and steel products will be hand sorted and separated from the pile of garbage. These materials will be stored in a separate location to be transferred to recycling plants. The leftover waste will then be lifted by a front end loader into large capacity transfer trailers and barged out to the Regional Sanitary Landfill located on Mile 24 on the George Price Highway. 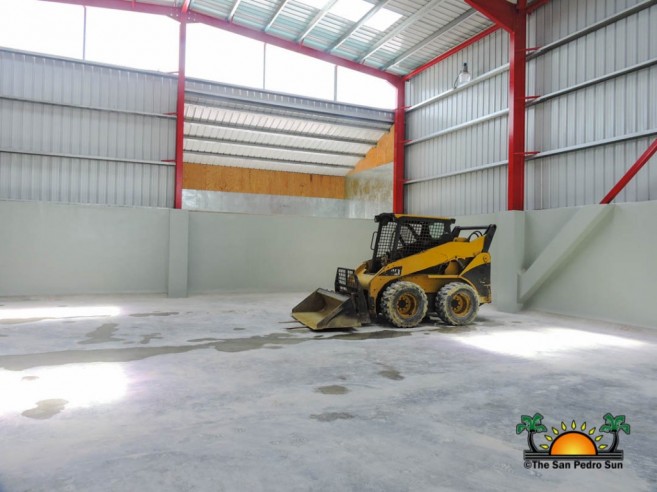 While it is not yet mandatory for residents to sort out their garbage, SPTC does encourage persons to separate recyclables from household garbage. Residents are also asked to properly bag their garbage for an easier collection process and properly dispose of it in bins to prevent spillage by natural elements or animals.

SPTC to implement No wake Zone and declare no swimming area