For quite some time now, island residents have been complaining about the unsightly garbage across the island of Ambergris Caye. Despite the complaints, garbage still continues to be an issue. To date, the San Pedro Town Council (SPTC) has addressed and cleaned up three main problem areas: Alta Mar Area, the area between the beach and airstrip in town core, and Boca del Rio. A system has been placed in order to address the garbage situation on the island, but SPTC needs the collaboration of the public. 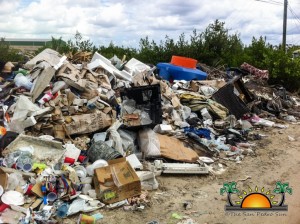 According to Deputy Mayor, Gary Greif, the council is trying its best to attack the issues from all fronts. “There are agreements with people from the resorts up north who can take their garbage to the Marina, which is collected by private companies. From the Marina Area, Town Council employee Samuel Gonzalez takes the garbage to the dump. This is only for people that have arrangements with us. Everybody else needing to dispose of their trash has to go to the garbage dump. Greif also explained the schedule for garbage disposal. “There is the normal residential garbage pickup which is done by the large compactors, then you have the yard garbage pickup which is done on a schedule basis, two days for Escalante, Boca del Rio, DFC and it rotates”. He also mentioned that they have agreements with trucks identified with a black plate, which can be hired for private garbage disposal. These operators know the procedure of taking the trash all the way to the garbage dump.

Another approach to address the garbage issues on the island is through education as well. Greif partnering with Ruben Gonzalez, councilor in charge of Education, to start a program with the local primary schools. “We are doing a fun program whereby, we are getting 200 new colorful garbage bins. The idea is to get four schools involved, (New Horizon Seventh Day Adventist, San Pedro R.C, Holy Cross, and ACES) and have a competition within each school. It will be classes vs classes to come up with a design for the garbage bins, and then we will have the winning design painted on the bins. He hopes that this initiative will encourage students to get some pride when they see their work being display. At the same time it is expected that the amount of garbage left behind after every lunch period right in front of SPRCS stops. It is the hope that the design competition along with education will teach the children not to litter, but rather be proud, clean citizens. 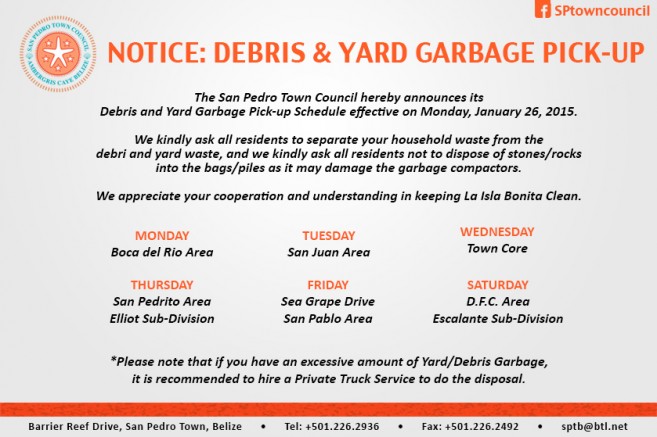 Greif also stated that everybody should work together to keep San Pedro as Belize’s tourism Mecca. He asks everyone to assist the SPTC in reporting people who continue to do illegal dumping. He will also like to inform the public that in addition to efforts to control the illegal dumping there will be law enforcement officers who, by law, will have the power to give warning letters and tickets.
There are also plans to have a garbage transfer station operating on the island to further thwart the garbage situation. When this is in place, the garbage will no longer be burned, but rather taken to the transfer station and then to the mainland. A meeting involving SPTC and Belize Solid Waste Management Authority (SWAMA) is expected to take place in the upcoming days to finalize details on when the garbage transfer station will be on the island.

More on Community and Society
Police press conference to be held at 2:00 p.m.