Residents, stakeholders, and visitors of Southern Ambergris Caye have been complaining about the construction of a seawall, which is affecting homes and businesses. Reports are that the concrete structure has changed the flow of sea currents, allowing seaweed and other sea debris to accumulate in front of beach properties. Residents are indicating that the stench of dead seaweed and garbage has become so unbearable that it is causing a dent in the tourism business in that area. 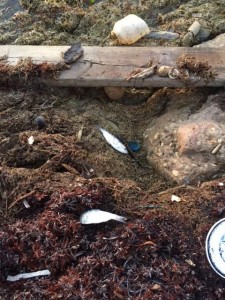 The San Pedro Town Council has been made aware of the issue, and Mayor Daniel Guerrero is familiar with the particular incident. In an interview with The San Pedro Sun, Guerrero said that he will investigate the legalities of that structure. “It is an issue and I am against it,” said Guerrero. “The problem is that the structure is going further out, beyond the point of where a seawall should be. If no permit has been issued, then we will look into it.” According to Guerrero, the structure is not considered a sea wall yet, since it is just rocks being piled up in front of the beach. 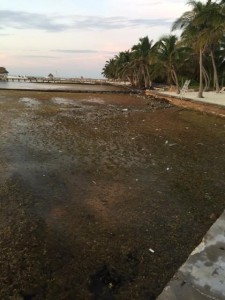 He added that when it comes to the approval of sea walls the jurisdiction is mainly under the Ministry of Natural Resources. He also commented that the aesthetic aspect of properties on that side of the island will eventually change, and anyone living down there would simply need to adapt. “If there are neighbours next to you with seawalls, eventually you will have to build your own one too,” said Guerrero. “If not, then the problem of debris accumulation will not stop.” Guerrero says that the island is developing rapidly and with it will come many challenges.
However, up to press time, residents report that no one from the local authorities had been in the area to address the situation. According to them, the massive accumulation of debris is killing the nearby marine life. They have contacted personnel from the Health Department and environmental organizations, but no one has shown up to analyse the issue.
The San Pedro Sun made several attempts to reach the Health Inspector on the island, but to no avail.