The island of Ambergris Caye is considered the fastest-growing municipality in Belize, with tourism and real estate projects continuously on the rise. While this may benefit the local economy via jobs and foreign exchange, it often involves clearing vegetation for coastal development projects. Mangroves are cleared in some parts of the island at an alarming rate, with little consideration for environmental impact. In an attempt to raise awareness about these plants, Aces Wildlife Rescue and ECI Development have joined forces in a mangrove rehabilitation program that has led to planting mangrove propagules (seeds) along specific areas of the beach.

According to Aces, their approach is an environmentally sustainable option, and planting mangroves along this stretch of beach is a test to see if the land can be reclaimed. The seeds are safeguarded in a casing made out of bamboo. Aces and ECI are hopeful that the project could work, and send a message to government authorities about supporting this type of environmental program. The government has the power to authorize the clearing of mangroves in the name of development, and at the same time, they issue permits for the building of seawalls along the beach.

The impact of seawalls and the importance of mangroves

Seawalls are said to change the flow of sea currents resulting in erosion. Concerned environmentalists on the island fear 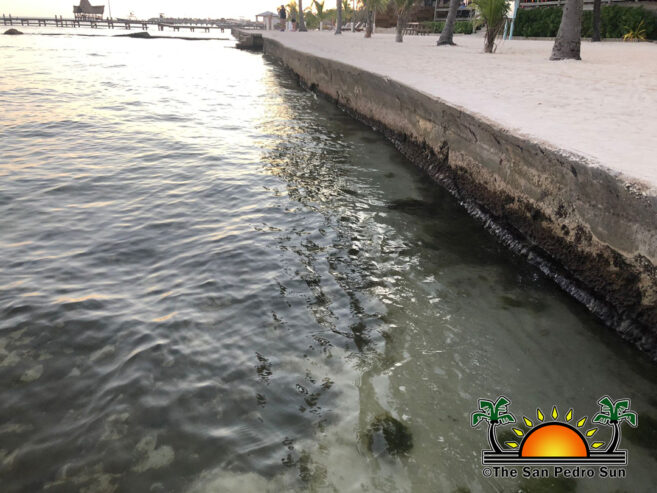 that if more seawalls are allowed, beaches and other stretches along the coast could disappear. For residents living near these structures, it could become a severe problem, and to save their properties from the inevitable erosion, they could force to spend a hefty amount of dollars.

Aces believe that instead of building seawalls, developers should be encouraged to leave or plant mangrove instead. Mangroves are essential for the environment. These coastal trees provide crucial habitats for thousands of marine species, which eventually migrate to the barrier reef. Mangroves also stabilize shorelines, filter toxins, prevent erosion and protect the land and people from storm surges.

Aces thanks ECI Development for their partnership and for making this project possible. Aces said they have more mangrove seeds to plant. The plan is to also plant some mangrove seeds in the downtown area where erosion is slowly eating the shoreline away.

About the partnership between ECI Development and Aces
Since arriving in the region in 1996, ECI Development has focused on a variety of community projects that assist the local populace and the surrounding environment. With its home base in Belize and having witnessed the tireless efforts of the operators at Aces Wildlife Rescue, it was only a matter of time before ECI would find a way to connect on projects that both protect and sustain wildlife and tourism. “In 2021, we embarked on a partnership to donate US$75 for every parcel of Teak sold from either of our plantations in Nicaragua and Panama. It gives us great pride to state that as of Q3, 2021, nearly US$15,000 has been donated to Aces,” said a representative for the company. “The team at Aces has also turned their focus on mangrove restoration, and some of it is taking place on the leeward side of Ambergris Caye. Here at ECI, we continue to promote a culture of responsibility and sustainability, and we look forward to seeing Aces accomplish its goals.”

Over 5000 lbs of trash removed from lagoon clean-up