The Belize delegation attending the current 26th Conference of the Parties (COP26) climate change summit in Glasgow, Scotland, continues making its mark, highlighting how the country has been working to mitigate global warming. On Wednesday, November 3rd, the Ministry of the Blue Economy and Civil Aviation (MBECA) participated in an “Accelerating solutions for post COP26: financing oceans resilience as a priority for climate action” side event. The discussion panel included guest speakers, including Belize’s Beverly Wade, MBECA’s Policy and Planning Advisor. The event link is https://bit.ly/3GMqApT

The side event on the margins of COP26 was organized by the World Wildlife Fund (WWF) in partnership with the Ocean Risk and Resilience Action Alliance, International Union for Conservation of Nature (IUCN), and the Commonwealth Secretariat. Some of the other speakers included Dorothée Herr, Manager of Oceans and Climate Change, IUCN, Nicholas Hardman-Mountford, Head of Ocean and Natural Resources, Commonwealth Secretariat. He was followed by Chip Cunliffe, Biodiversity Director at AXA XL (TNFD Sept 2021), Co-chair, ORRAA, Margaret Kuhlow Finance Practice Lead, WWF-International, and Stephen O’Driscoll, Head of Climate, Environment and Social Policy, European Investment Bank.

Kuhlow, the event moderator, opened the floor, stating that the latest climate science shows that the window of opportunity to avert a climate catastrophe is rapidly closing. She pointed out that the financial sector should prioritize investments to solve the climate change issues. To prevent the global temperature from surpassing 1.5C healthy oceans are a must. Kuhlow reminded everyone that COP26 is the opportunity to start that path to a sustainable future for forthcoming generations.

The panel discussion showcased the value of ocean-climate solutions. It explored the potential to leverage increased international finance to underpin these and build the resilience of the ocean-dependent communities and economies. A range of examples from Commonwealth countries such as Belize was highlighted, and practical recommendations for advancing integrated ocean-climate action and finance were discussed. 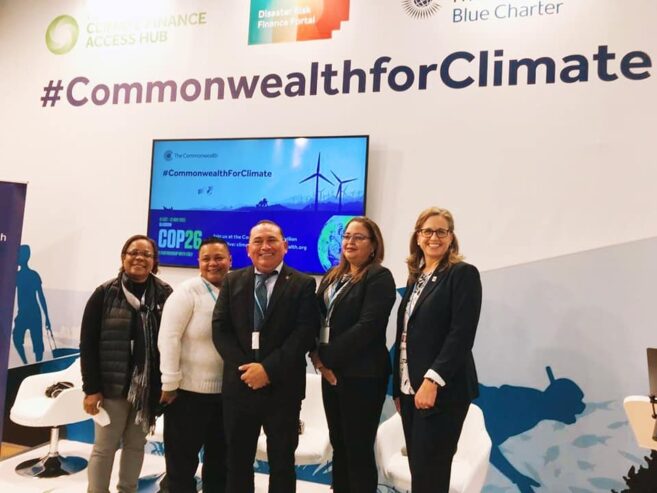 Wade took the panellists and the rest of the audience to the field and shared how natural resources are essential for Belize, stating that Belize is a leader in integrated oceans and climate solutions. She explained how diverse Belize’s marine systems is home to the second-largest barrier reef in the world, a World Heritage Site. Some components highlighted were the seagrass beds, reefs, and mangrove areas, which support biodiversity. “They play a very important role in the lives of Belizeans. More than 50% of our population are coastal, and our reef is associated with their livelihood, food security, and the national economy,” said Wade. She added the productive sector in the country, such as fisheries and tourism, depend on these natural resources that also protect the shoreline from storms and other threats caused by climate change.

Wade emphasized the importance of the ocean to the Belizean people and economic development. “We have established an extensive network of marine protected areas, approximately 16% of Belize’s ocean space is now under protection,” said Wade. The introduction of new commitments via the recently signed Blue Bonds initiative was also mentioned. The enterprise drives Belize into engaging in more ambitious goals to expand marine protected areas and double the protection for mangroves. Wade said that one of the goals regarding mangroves is to add 12,000 hectares by 2030. A restoration plan for areas degraded by storms and climate change will aim to rehabilitate 4,000 hectares by 2030.

How to benefit from seagrass meadows was also discussed. Wade indicated this had been neglected, but now her government is creating a seagrass group that will look at specific actions to target seagrass conservation. She reiterated that these resources are critical for the development of the productive sector. “Belize’s coastal resources are about livelihood, people, food security, climate change adaptation, and mitigation,” said Wade. Those part of the discussion panel were impressed to hear that Belize considers its shoreline an essential component of its economy. The efforts in Belize were considered a great example of how to value ecosystems.

Belize coastal resources are estimated to provide around $1 billion in revenues to the government annually. Wade added that such monetary value drives the country to seek better ways to protect coastal areas to maintain the integrity of its many ecosystems.

COP26 is considered the ultimate opportunity to save the planet, and the oceans are one of the main focal points. Everyone agrees that a healthy and biodiverse ocean can help keep the climate balanced, feed a growing population, and support viable economic development if sustainably managed. Therefore, investing in ocean health should be considered essential, which is why it is critical to align the climate and ocean finance agendas. Climate finance, however, still falls far short of what is needed to keep global warming within 1.5°C. As little as 3% of climate finance is finding its way into nature, with ocean resilience being the least invested in.

Controlling the use of pesticides to protect food and the environment