For the past months, dredging for sand has been taking place in southern Ambergris Caye under the approval of The San Pedro Town Council (SPTC). According to Mayor Daniel Guerrero, the sand is not for business purposes, but for the benefit of the community. It will be used in the cemetery, parks, schools, and in a beach reclamation project on the eastern coast of town. However, an apparent oil slick is raising concerns on the environmental impact the dredging has on the Hol Chan Marine Reserve. 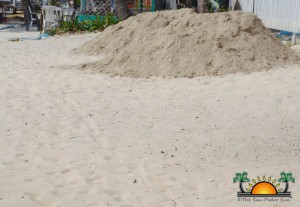 Guerrero said that it is possible that there could be a small oil slick in the area, but they will look into the matter. He then veered his attention into the purpose of the dredging, and indicated that all schools on the island will benefit with some sand, particularly those that are affected during the rainy season. “The sand will not only make these schools more accessible for students when it rains, but we hope that it also helps in alleviating the situation with the mosquitos,” said Guerrero. “There are people who may criticize the dredging, but we need sand for our cemetery, parks, schools and our beaches.”
However, residents living near the dredging area continue to report a slight sheen on top of the nearby waters, giving the impression that it is oil or gas. It is believed that it may be coming from the machinery doing the dredging. The management at the Hol Chan Marine Reserve told The Sun that they were made aware of the issue, but it is not causing any problems to the reserve itself. However, they will be monitoring the situation closely.
As for the beach reclamation project, the beach portion in front of the Central Park was renovated in March of this year prior for the Easter Week festivities held in April. According to Guerrero, that upgrade made a huge difference in the beach events during the Holy Week and believes that another layer of sand will be needed to widen and enhance that area. “The other part of the island that will benefit from this project will be from the Palapa Bar and Grill dock to the Boca del Rio Park,” said Guerrero. This project is expected to slow the erosion affecting the island’s beaches. Guerrero said that once the project is completed no large vehicles will be allowed to transit between the Palapa Dock and the Boca del Rio Park. The area will be accessible only by golf carts for a temporary period of time. Afterwards, it will be accessible by pedestrians only.
The SPTC hopes that in the future, more beach areas can be developed around the island. One of those areas will be near where the dredging is currently taking place. “We are doing some sort of an experiment at the moment. Most of the sand that erodes from our beaches ends up in the southern tip of the island. By dredging in that area, we can find out how long the sand takes to gravitate back there,” he said. In the meantime, the Mayor says that other areas on the island will take priority.
Dredging is expected to continue for the rest of the year. It is expected that by enhancing the public areas such as parks and beaches, it will add to the beautification of the island.
When asked about the promised dredging to take place at the Sunset Boardwalk, the Mayor indicated that they are still finalizing the final details, and there is no set date to begin.

Be Green with the Belize Recycling Company