Since May 1, 1974, Belize has fostered an outstanding relationship with the Caribbean Community (CARICOM). Belize is now scheduled to host the Inter-sessional Meeting of CARICOM Heads, to be held on February 16th and 17th at the Placencia Peninsula. The meeting will see the participation of 15 member states including Antigua and Barbuda, The Bahamas, Barbados, Belize, Dominica, Grenada, Guyana, Haiti, Jamaica, Montserrat, Saint Lucia, St. Kitts and Nevis, St. Vincent and the Grenadines, Suriname and Trinidad and Tobago. Belize hosting the meeting is incredibly historic, as Prime Minister Dean Barrow currently holds the Chairmanship of the Conference of Heads of Government of the CARICOM.

Belize has a longstanding relationship with CARICOM, including the distinction of a Belizean being the first female Deputy Secretary-General (DSG) of CARICOM. Dr. Carla Barnet served CARICOM in that capacity from 1997 to 2002. While acknowledging the milestone that she achieved, she deflected attention to the skill set that she brought to the position. “It was an honor for me to be selected. Being the first female Deputy Secretary-General, while it was a historical milestone, I’d like to think that I came there not because I was a woman, but because I brought a particular set of skills that the Secretariat needed at that time,” said Barnett. Dr. Barnett has extensive experience at the executive level of the public service in Belize and in the CARICOM region. Her tenure as CARICOM Deputy Secretary-General coincided with the re-organization of the CARICOM Secretariat, the Community’s administrative body. Since her tenure, two other females were appointed DSG, Ambassador Lolita Applewhaite and current DSG, Ambassador Manorma Soeknandan, PhD.
Belize is also home to key CARICOM Regional Institutions. One such institution is the Caribbean Community Climate Change Centre (CCCCC), which supports the people of the Caribbean as they address the impact of climate variability and change on all aspects of economic development through the provision of timely forecasts and analyses of potentially hazardous impacts of both natural and man-induced climatic changes on the environment, and the development of special programs which create opportunities for sustainable development. Another is the Caribbean Regional Fisheries Mechanism (CRFM), a CARICOM institution that was established by the CARICOM Member States by the 2002 Agreement Establishing the Caribbean Regional Fisheries Mechanism, which entered into force on February 4, 2002. Through these institutions, Belize has strengthened its role in CARICOM in hopes of developing the region’s economy. 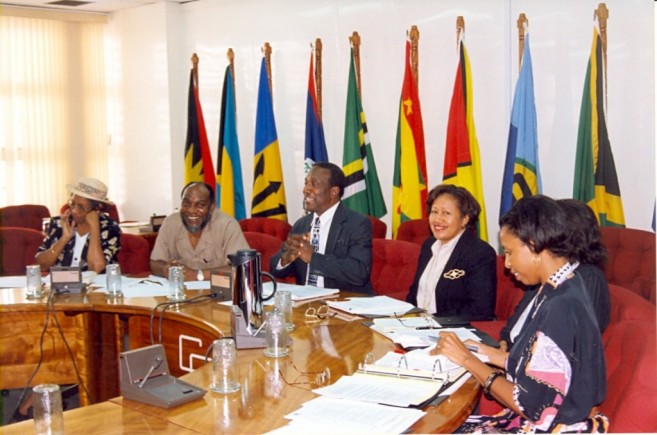 In fact, the Father of Belize’s Independence and former Prime Minister, Right Honorable George Price is among a few honored with the Order of the Caribbean Community (OCC) award. In 1992, CARICOM began to recognize the most sterling of contributors of individuals from all walks of life who helped shape our Community. OCC is the Regional honor conferred on distinguished CARICOM nationals who have made outstanding contributions to the development of the Community. In 2001, the Community conferred the OCC on the Right Hon George Price, for Premier and first Prime Minister of Belize.
Belize also showed its CARICOM ties through the change of its passport design in 2009 with the introduction of the CARICOM passport, seen as an important symbol of Regionalism and visible proof of common identity. The CARICOM passport created awareness that CARICOM Nationals are Nationals of the Community, as well as a specific country. It was also part of the measure to promote hassle-free travel for CARICOM nationals.
More on the history of CARICOM will be posted throughout the coming days.