Home » Government » Forward Operating Base at Sarstoon coming along

Forward Operating Base at Sarstoon coming along


On December 19, 2016 the controversial ground breaking of the joint Belize Defense Force (BDF) and Belize Coast Guard (BCG) Forward Operating Base (FOB) was held at an area of land on the northern bank of the of the Sarstoon River in southern Belize. Two months later work has progressed and the building is starting to take shape. On Wednesday, February 10th the Minister of National Security, Honorable John Saldivar visited the construction site, applauding the rapid pace of construction. The FOB has been long needed in the area for law enforcement presence, as the area is known for illegal activities. 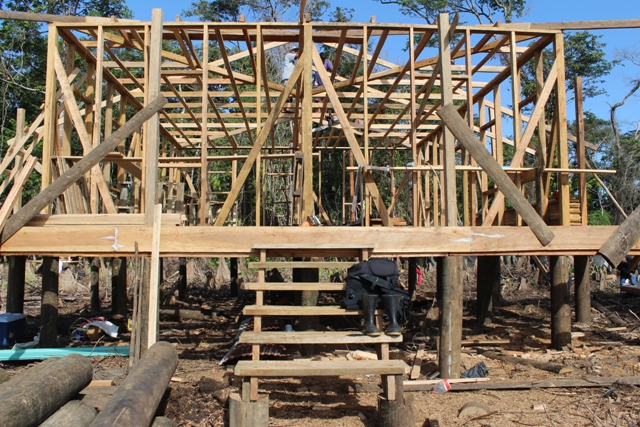 On his visit to the construction site, Saldivar was accompanied by senior members of the BDF, the Belize Police Department and Ministry of National Security officials, along with Honorable Frank Mena. The FOB at the mouth of the Sarstoon River is one of several initiatives being undertaken by the Government of Belize to safeguard and protect Belize’s sovereignty. “The Forward Operating Base, though modest in its beginnings, will establish a much needed presence and will serve to combat illicit activities such as drug, contraband and human trafficking, and weapons trading, which threaten Belize’s national security,” indicated Saldivar.

While construction is ongoing, BDF personnel have been stationed on location in temporary structures to ensure safety to the workers. The area where the FOB is being built has long been claimed by Guatemala as part of their territory. They have even displayed military hostility towards Belizean armed forces that frequent the area. Prior to the start of construction, Guatemalan government issued a diplomatic note indicating that they would not oppose the construction of the FOB but asked GOB to not interfere with fishing practices carried out by Guatemalans in the area.
Construction is expected to be completed in the next few months.