The Government of Belize (GOB) has succeeded in renegotiating their billion dollar Super Bond debt, saving Belize over $600 million dollars. The agreement to restructure the debt comes after months of negotiations between GOB and bondholders. A committee representing the majority of creditors endorsed a revised proposal from Belize that reduces the interest rate on the Super Bond and shortens its maturity. However, GOB agreed to only seek assistance from the International Monetary Fund if it fails to meet certain fiscal targets in the upcoming four years. 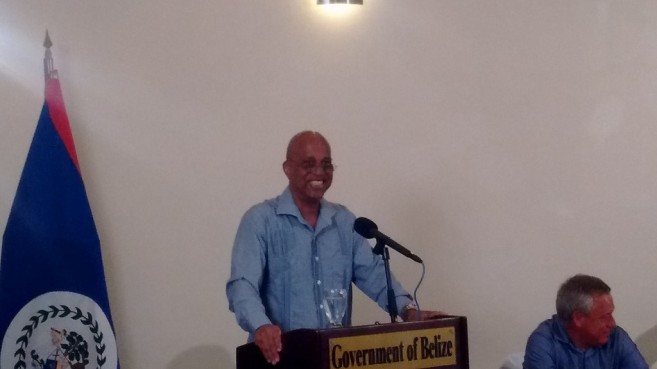 The negotiating team comprised of Prime Minister Right Honourable Dean Barrow, Attorney General Honourable Michael Peyrefitte, His Excellency Economic Ambassador Mark Espat and Financial Secretary Joseph Waight, believes that the result of the negotiations is a win-win for all Belizeans. With this positive outcome, it is expected that GOB will avoid principal payments of $55 million dollar per year scheduled to start in 2019. The new agreement now calls for five equal instalments from 2030 to 2034.
During a press briefing on Wednesday, March 8th in Belize City, Barrow discussed the benefits on the Super Bond success. He highlighted that no public officers would lose their jobs, nor would there be any slow retrenchment or behind the back termination. He also added that there will be no delay or cancellation of scheduled salary increase. Barrow also indicated that there will be no increase in the business tax.
According to him, the negotiations also succeeded in getting a 27% reduction in the interest rate, from 6.767% to 4.9375%. This significant reduction has decreased the debt by 25% when talking in real dollars and equals Net Present Value (NPT) savings of US$85 million. Such accomplishment is also in addition to the reduction obtained in the 2012-2013 deal, in which Barrow saved the country BZ$22 million. According to GOB, during the five-year period 2012-2017, under the last restructuring of the Super Bond in 2013, about BZ$115 million has been written off Belize’s external debt.
The negotiations leading to the recent debt restructuring began in November of 2016, when Prime Minister Barrow approached bondholders with the proposals. The first proposals were rejected by the bond creditors in January of this year. They claimed at the time, that GOB’s offer was not fulfilling, and it would reduce the NPT of the bond by over 40%. With such a negative response, it was feared that Belize would default when they failed to make the February payment on the Bond. But Government was optimistic, since the failure to make the payment triggered a 90- day grace period, in which GOB could find a solution before going into default.
That solution came a week before the grace period was over on Friday, March 3rd when bondholders were urged to approve the revised consent of solicitation from Belize. However, according to critics, even though it appears to be a good deal for Belize, it is not a done deal as yet. Creditors have until Friday, March 10th to make it official, even though they have indicated their approval.