Press Release – Saga Humane Society – March 31, 2015 – As Ambergris Caye continues to top the lists of the World’s Best Destinations, tourists flood our shores in search of sunshine, good food and great people. What they often find is much more than that. As they stroll our streets and peek in and out of our shops, they also encounter our stray dog population. Often these visiting sun seekers stumble upon Saga Humane Society and the inevitable happens. It starts with a casual walk on the beach, a quick visit to the shelter, a day spent at Fort Dog, or in one case, a dreadful day at the beach that ultimately leads to Pedro the Great White of NYC. 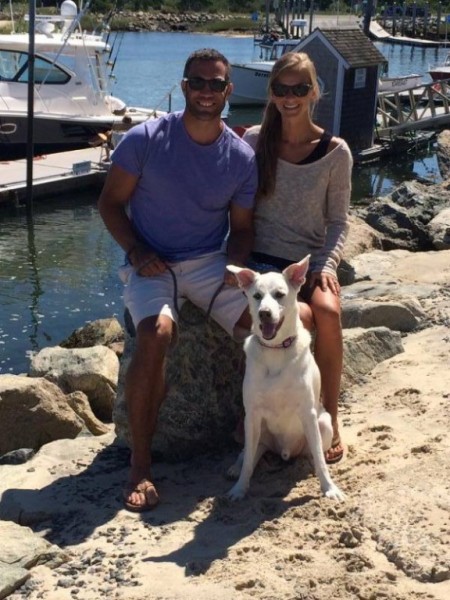 While vacationing in San Pedro in February 2011, Alex and Dave Brooten who live in New York City, New York USA on the Upper East Side noticed a few local children carrying a tiny puppy around a resort area. The two came to learn that the little pup was born just a few weeks prior, to a stray dog living in the children’s yard. It was clear that this 5-pound pup was pretty sick and in need of some care, so they rushed to Saga Humane Society. “At this point we had completely fallen in love with the puppy “Pedro”, named after his hometown of San Pedro, and decided that we were going to do whatever we could to help him and, we hoped, take him home to the US”, recalls Alex.
Alex and Dave met in 2007 and were married in 2013. Dave is a CPA and an Asset & Wealth Management at Deutsche Bank. Alex is a speech-language pathologist in the NYC public school system. The couple loves to travel and still considers San Pedro, Belize one of their favorite destinations
“The incredibly welcoming, helpful volunteers and vets at Saga took care of Pedro and guided us through the adoption and vaccination process so that we could take him home to New York. It was a long road to get Pedro healthy, but it was worth it! Four years later, Pedro is now a happy, loving, New York City dog. He is a local celebrity in our neighborhood, and everyone knows him as the dog from Belize with the endearing “prance”. Pedro has a congenital neurological disorder, he was unable to support himself on his legs as a puppy, but he has learned to compensate for his condition, and the result is an adorable gait that resembles that of a dressage horse!” states Brooten.
Each summer, Pedro travels to Cape Cod for two weeks, where he is able to run free and frolic on the beaches. “These two weeks are definitely his favorite of the year, we think it reminds him of his Belizean roots.”
Pedro also enjoys car rides, going to the park, tennis balls, treats, and sleeping between his mom and dad every night. At 70 pounds, he still believes that he is a lap dog and never misses an opportunity to sprawl out across his owners’ laps on the couch. Pedro has an older feline brother named Mike, and in June he will become a big brother to a human baby sister. The Brooten’s are so thankful to all the people at Saga who helped care for and rescue Pedro, considered by Alex and Dave “the best dog in the world”.
To find your forever friend, contact Saga Humane Society at [email protected] or call 501-226-3266. There are lots of wonderful dogs and cats at Saga just waiting for their forever family.
ABOUT SAGA
Saga Humane Society was founded in 1999 as the first and only non-profit animal shelter and clinic in Belize, whose mission is to promote kindness and prevent cruelty to all animals. For more information, to volunteer, to book a Humane Education presentation or to make a donation, please go to http://www.sagahumanesociety.org or email [email protected]