42-year-old Brian Castillo has reported to officials that on Thursday, March 12th he was brutalized by Gang Suppression Unit (GSU) personnel on the island. Castillo claimed that while working at a resort North of Ambergris Caye as a security guard, between 3AM and 5AM, GSU visited the establishment demanding that drugs be handed over. Castillo stated that he indicated to the GSU that he had no drugs but instead of being left alone was badly beaten up. 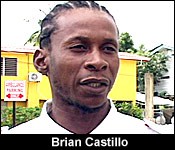 Since the incident, Castillo has been issued a medical report for the injuries he sustained due to the attack. He sustained broken ribs as well as several cuts and bruises across his body. “On the day of the incident the GSU went to my place of work and grabbed me from in front of a door, held me to the ground and started beating me. They asked me to hand over the drugs. I told them I found no drugs and I don’t know about any drugs. They fractured three of my ribs.I got bruises to the leg. They stomped me in the face. I thought I was going to die. Afterwards, they lifted me off the ground and they handcuffed me, one put a gun at the back of my head, one in my mouth and they told me to go and show them the next camp south of where I was. So they took me like quarter mile south of where I was. When we reached they laid me on the ground and left one of them to guard me, while they went to the front where the cabanas are. I heard some person screaming and yelling. I think they were also beating them up,” said Castillo.


San Pedro police can confirm that Castillo made an official complaint and submitted a medical form. Investigations are ongoing.