At 6PM at all polling station #37, the main gates were officially closed. With tight security by the San Pedro Police, only electorates already in line are allowed to remain in the polling areas. In San Pedro, there was a last minute rush and at 6PM the lines were packed with hundreds of individuals waiting to vote.

The last count received from returning officers in Belize Rural South were given at 5PM. At that time, in the Municipal Elections, 3421 individuals had come out to place their votes. This marks a total of 54.4% of voter’s turnout.

In the General Elections, the last count received by The San Pedro Sun was at 5PM when 3,455 voters of the 6,289 voters in San Pedro had turned out to cast their votes, while in Caye Caulker a total of 580 of their 802 voters had turned out to cast their votes. This brings the total number of individuals that casted their votes in the General Elections to 4,035, a percentage of voters’ turnout is at 56.83%. 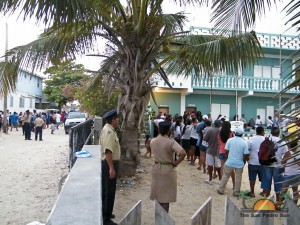 With the gates closed, we are awaiting a final count of the overall voters turn out which we expect to receive sometime around 9:30PM. Any information received prior to that time will be updated on our website as they become available.