Minister of National Security Hon. John Saldivar visited and addressed members of the Volunteer Battalion of the Belize Defense Force who are currently engaged in their Annual Battle Camp.

Battle Camp 2013, which is being held at Camp Belizario, located at Central Farm in the Cayo District, focuses mainly on operations conducted in what the BDF calls the Western Tactical Area of Responsibility. This includes internal security; assisting and supporting agencies such as Immigration, Customs, Belize Agriculture Health Authority (BAHA), National Institute for Culture and History (NICH) and the Police; inland and border patrols; and manning observation/conservation posts. 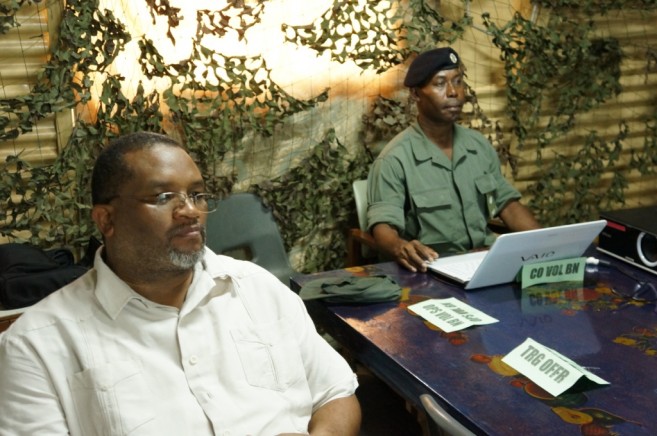 Speaking to the troops, Honorable Saldivar congratulated them for their unselfish service to their Country, and he emphasized the increasing role they must play in preserving safety and security both internally and along our national borders.

Earlier in the week, on Tuesday, July 16, Commander of the BDF, Brigadier General David Jones had similarly visited and addressed members of the BDF Volunteer Battalion at their Annual Battle Camp in Camp Belizario.