Home » Community and Society » Religious » Letter to the Editor: AS IF SOME LESSER GOD HAD MADE THE WORLD

Letter to the Editor: AS IF SOME LESSER GOD HAD MADE THE WORLD


“Love is patient, love is kind. It does not envy, it does not boast, it is not proud. It does not dishonor others, it is not self-seeking, it is not easily angered, it keeps no record of wrongs. Love does not delight in evil but rejoices with the truth. It always protects, always trusts, always hopes, always perseveres.” 1 Corinthians 4-7, The Holy Bible

The Messiah from Nazareth had one core message for those who would follow his teachings –“Love one another as I have loved you.”
Judeo-Christian belief is founded on the teachings of Jesus of Nazareth, who taught a gospel of love that was radical in its replacement of blind, rote obedience to forms of faith that revealed the face of the Almighty as a wrathful terrible master, with a gospel of the Creator as a loving, forgiving father.
Among the things that the Catholic Church and evangelical Christian churches in Belize have in common is the purported doctrine of “love the sinner, hate the sin”. According to that teaching, the adulterer, the thief, the murderer are all worthy of love, even if what they have done is wrong.
Doctrinally, for most Christians, members of the LGBTTQIA community are sinners. Sinners for what they do, because most do not concede that this is about identity and not sin.
See, for a Christian, conceding that being gay or transgendered or intersexed is an identity and not a choice, would mean that a Creator made such a human being that way in the Creator’s image and likeness.
It is interesting to see how Christian faith in action approaches the matter of non- heterosexual humanity, however. On the one hand, there is Father Matthew Ruhl SJ of St. Martin De Porres parish, whose powerful sermon on love, acceptance and faith sent off Joseph “Prince Joe” Sanchez/Cenaida Ramos in January of 2014.
Father Matthew Ruhl SJ of St. Martin de Porres Parish in Belize City has a face out of an El Greco painting and a voice like a raucous, unmelodious auctioneer. Make no mistake. Father Matthew is rough. He is blunt and unadorned of speech. He pulled no punches, and rather than stand behind a pulpit talking down to us, he came down into the center aisle and spoke his truth.
That we must learn the meaning of hate, like we strive to know love. That hate is nothing but ignorance and fear and that hate is strongest in those who are most fearful and ignorant. That hate is uniquely human, and uniquely directed by humans at other humans. That it is wrong.
He spoke of Joseph with love and compassion and acceptance. He said that Joseph was a child of God, and that all LGBT persons are children of God, and that he did not blame them for feeling as if the Catholic Church and Christians had abandoned them. Father Ruhl apologized, as a Catholic priest, on behalf of any and every Catholic who had ever abused or offended members of the LGBT community.
He promised that as long as St. Martin De Porres exists, and he is there, as its Parish priest, there is a home and a welcome for every LGBT person, and for every human whether gay, straight, fat, thin, tall or of whatever race.
I had never heard a sermon like this in any Catholic Church in my 35 plus years of church-going. It was urgent, compelling, plain, true and filled with love.
For the first time in many, many years, on that day I felt as if I was truly in the presence of love and of acceptance of the true principles of true human rights and social justice.
I had hope, that day. Hope that was lit by those words of love and acceptance. Father Matt brought the beautiful words from 1 Corinthians 4-7 to life.
…
Sadly, that hope is flickering out. Yesterday, at the funeral of activist Jose Felix Ayuso, another Catholic priest, Fr. Scott Giuliani chose to approach the death of a much beloved San Pedrano in a very different way. 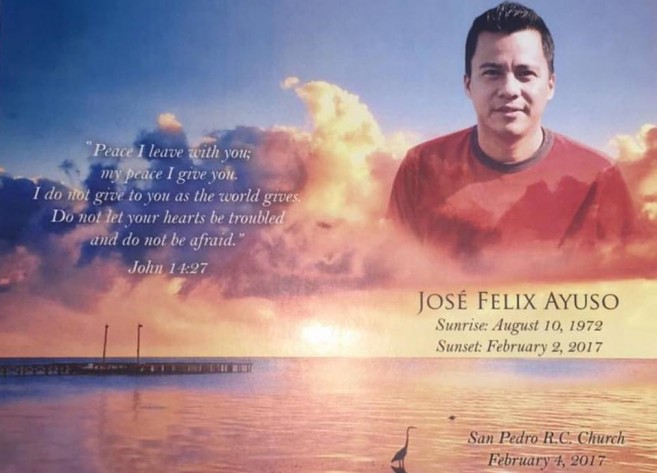 Fr. Giuliani chose a very different text from St. Paul’s letters to the Corinthians. He chose Chapter 6, verses 9-10.
First, though, some words about Fr. Giuliani – his own. In the July 15th online edition of The San Pedro Sun, a Letter to the Editor was published with the headline: “The Catholic Church Welcomes All Persons with Same-Sex Attraction.” That letter, written by Fr. Giuliani opens as follows:
“To my brothers and sisters with same-sex attraction: Let us all love one another as Jesus has loved us!
As the pastor of San Pedro Catholic Church I want to take this opportunity to reach out to all our brothers and sisters who have same-sex attraction. Whether the same-sex inclination is in the nascent stages or you have fully chosen to identify and live a homosexual lifestyle, I want to make clear that I love you and most importantly God loves you. I understand the sufferings, confusion and loneliness that many of you experience in silence and I want you to know that the Catholic Church and God’s mercy is a refuge for you. Strengthened by God’s word and the sacraments, thousands of men and women with same-sex attraction have experienced the freedom and love of the Gospel in the Catholic Church. “
Sounds so loving and promising? Not so fast. In his letter, Fr. Giuliani makes it clear that the only hope of salvation for “brothers and sisters who have same-sex attraction” is that they refrain from ever expressing or exercising that “same-sex attraction”. In other words, he reduces an identity to one thing. A sexual attraction which is sinful and which must be denied to attain salvation.
Yesterday, before Felix’s grieving family and his many friends, Fr. Giuliani went there. He spoke of there being no peace without justice, no justice without mercy – and then said, that “our job is mercy”, before adding as a warning, “But not mercy that ignores the justice of consequences…”
He then spoke one of the harshest passages in St. Paul’s Letters to the Corinthians, “Do you not know that the unjust will not inherit the kingdom of God? Do not be deceived; neither fornicators nor idolaters nor adulterers nor boy prostitutes nor sodomites, nor thieves nor the greedy nor drunkards nor slanderers nor robbers will inherit the kingdom of God.” And that is the translation he used. In. Those. Words.
In that one moment, Fr. Guiliani reduced a life of love, service, dedication, caring, selflessness and joy to ashes, and his threat was implicit in his words – no matter who you are, if you are LGBT, you are akin to boy prostitutes, sodomites, thieves, the greedy, drunkards, slanderers and robbers. And there will be no mercy for you. There will be justice in the consequence. And you will not be saved. You will not inherit the kingdom of God.
I cannot imagine a more malevolent message to deliver at a memorial mass – a moment meant to be a celebration of the life of a beloved departed one. That moment is to console, to comfort, to celebrate, to give thanks. I cannot fathom the malice that it took to deliver such a callous denunciation at the moment of deepest grief for those who most loved this beautiful human being whose life was robbed by hatred.
Fr. Guiliani’s words were clearly pointed at Felix, but worse, at his San Pedrano community who has lost his beloved and vibrant presence. And most of all, it was hurled at his other family, the LGBT community as condemnation. Vituperation. Hellfire. Cast into the void, away from the presence of the Creator.
A fragment from Alfred, Lord Tennyson, expresses best my dismay: “I found Him in the shining of the stars, I marked Him in the flowering of His fields, But in His ways with men I find Him not.”
I find Him not in the words of Fr. Scott, as I had found Him three years ago, in another Catholic church, around this same time, in the words of Father Matt. I found Him not. It is as Tennyson puts it a few lines on: “for why is all around us here, As if some lesser god had made the world”. For this is what Fr. Scott reduced it to – as if a lesser god had made the world.
I cannot accept that premise. I cannot. If you are a believer, then you believe that the Creator made us all in his image and likeness.
If you are a Belizean or live in our Jewel, you are governed by a Constitution which states that we are each endowed by inalienable rights by our Creator and that by very humanity, we all have human dignity. And because we have human dignity, we have human rights that cannot be taken away. We are equal.
But we are, none of us equal, until we are all equal. I believe this with all my heart. And that equality will never be achieved unless we care for each other as we care for ourselves. It is our love, not our hate that will change our world, that will conquer injustice.
It is perhaps ironic that the Letters to the Corinthians themselves at chapter 13, verse 13 contain what is perhaps the greatest expression of humanity in the entire Bible: “And now these three remain: faith, hope and love. But the greatest of these is love.”