Over the weekend of November 17th twenty six junior sailors competed in six races at the Central Park to determine the Belize 2012 National Champion. In the end, Kevin Velasquez emerged the winner.
According to Press Officer for the San Pedro Sailing Club, Forrest Jones, the event was, “quite a spectacle, and added flourish to the Garifuna celebrations in Central Park.” 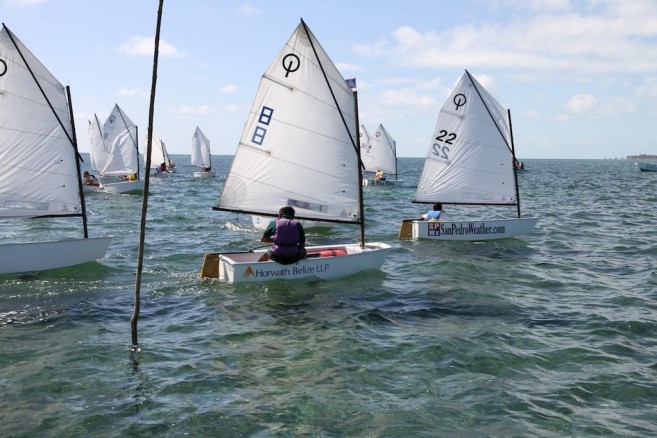 In a press release issued by the San Pedro Sailing Club – Jones wrote, “Here’s how a start shapes up. These skippers are “sailing the line” with four minutes to go. The start line is just a few feet to the left of the oncoming boats. The boat in the foreground has reversed course, putting his boat on a “starboard tack,” which means the wind is now on his right hand side. A boat on a starboard tack has right of way; all those oncoming boats have to steer clear of him. Imagine when it happens 30 seconds before the start! The skippers all have stop watches and are timing their planned approaches to the starting line to get there just as the horn starts the race, but you can see the potential for chaos lurking about?”
Over the course of all six races, Kevin Velasquez and Antonio Rodrigues Jr., a very talented skipper from the mainland, were locked in the tightest of duels. It came down to the last race to decide the champion, and Kevin won by only one point.
The release continued, “This is just after Kevin, in boat 22, and Antonio, in boat 8, crossed the start line. They are barely a second apart. Right behind the number 8 sail you can spy San Pedrano Jorge Oliveres’ boat. And he is on a starboard tack, so Antonio will have to avoid him. Throughout the regatta, Jorge was a constant threat, and he came away only 7 points behind Antonio, to win the third place bronze medal.”
Following the races Fido’s hosted dinner for all the young sailors while the ever-popular, charismatic singer/songwriter Kelly McGuire performed a benefit for the San Pedro Sailing Club. McGuire also helped to launch the Sailing Club’s 2013 calendar, which displays the local junior skippers in moments ranging between accomplishment and hilarity.
Soon the calendar will be on sale everywhere but eager early birds may contact Tammy Peterson at 610-0226 for ordering information.