The Belize National Male Volleyball Team is making final preparations to travel to the Central American Games (CAG) scheduled to take place in Costa Rica. The team is part of the delegation of athletes who will represent Belize at games. 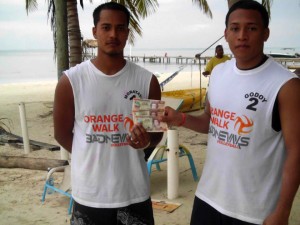 San Pedro’s own Gustavo Morataya and Orange Walk’s Abimael Godoy are the two Belizeans representatives who will participate in the regional games that will run from March 2nd to the 9th. The two athletes were selected from a three-stop beach volleyball tour which concluded last week. Head coach for the Belize Team is Arvid Arnold.

The two young men will be representing Belize for the first time and according to Oscar Arnold, the Beach Volleyball Commissioner for the Belize Volleyball Association, “the team will have a huge task in front of them, as they will be going up against some very talented and experienced teams from Central America.” In speaking to The San Pedro Sun, Morataya explained that he is pleased and excited to be representing the jewel. “Beach volleyball has been happening here for quite some time. The last three years, Belize hosted the Central American Games at the Marion Jones Stadium so we have been playing it for some time now in Belize. For me, it is an honor, because it is the first time I am going abroad to represent my country to compete internationally. It’s a big step for me because I have always had the opportunity to play beach volleyball but never to represent my country,” said Morataya. He also took the opportunity to thank Cholo’s Sportsbar and Caye Caulker Water Taxi for their continued support in his endeavors. 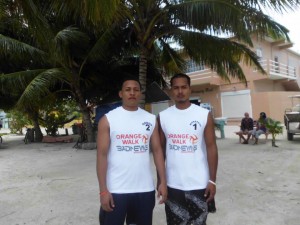 The team has only two weeks before leaving and they are hoping to push for as much team training with their coach as possible. “The Central American Games are big and will have about 29 disciplines. Doing well in volleyball is what we hope and if possible make it to the qualifying rounds which will guarantee us a medal. Most of all we hope that the team gains some experience, and that Belize improves in our world ranking,” said Commissioner Arnold. According to the Belize Volleyball Association, they have been trying to kick-start the sport in Belize and hope that “this team can represent us (Belize) in future regional games.” The team will be meeting for the next two weekends in Orange Walk Town for technical training, while physical training is being done in their respective towns.

The Belize Volleyball Association also congratulated Martin Swasey, the country’s only International Beach Volleyball Referee Candidate who will be a part of the officiating crew at the games at the Central American Games.

In context, Belize has a short history of volleyball participation and from the first time the sport was held as an exhibition game at the Central American Games they have not won a medal in this event. At the exhibit games in 2001, Belize did win the bronze medal. . The team back then was comprised of Tico Requena of Caye Caulker and Larry Bennett of Belize City. The San Pedro Sun joins the country in wishing the Belize National Beach Volleyball Team all the best.