Well known island athlete Eric Donis is the second Sanpedrano to join the 2013 Belize delegation to the Central American games scheduled for March in San Jose, Costa Rica. This will be the first time in history that Belize will have a triathlon competitor in the Central American Games and the first for Donis in the biggest competition in our region, next to the Pan-American Games. The fourth form student athlete is preparing both physically and mentally and remains optimistic of his chances in Costa Rica. Donis is the second resident of San Pedro Town, who will travel to Costa Rica to represent Belize; Gustavo Morataya was named a member of the Beach Volleyball Team last week.

Donis has been taking on triathlons seriously since the age of 15. He has participated and done respectfully well in various competitions within Belize. When speaking to The San Pedro Sun from the San Pedro High School, Donis said that travelling to the Central American Games is a big step in his athletic aspirations. “To me it’s a step forward, perhaps the first step in maybe a 1000 more as my goal is to one day represent Belize in the Olympics. This means a lot to me; I am overjoyed and excited,” said Donis who will be travelling around the same time that he is due to sit exams. “I am trying my best to cope with the two of them since education is also a priority,” he said determinedly. 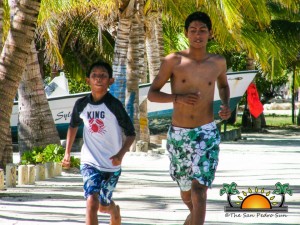 Eric runs alongside his little brother, who he encourages to join in sporting activities.

The senior high school student said that he is preparing physically, mentally and spiritually for the Central American Games. “ Triathlon is very different from other sports. You never know when it is too much working out; you never know whether you are doing too much or too little. What I do is that I try to swim about two miles a day… in riding what I try to do is I use my home trainer bicycle and I spin on one spot. I also go to Belize City and train with my coach there. We also have these beautiful beaches so what I do is that I run along the beach,” said Donis.

The Belize National Triathlon Association informed that Donis will be swimming 1,500 meters, riding 40 kilometers and running 10 kilometers. The young Donis said that so far, his clock time is improving and thus he remains positive that he will be able to represent the Jewel with pride.

President of the Belize National Triathlon Association Giovanni Alamilla said that he has high hopes for Donis as he represents Belize. “It is a big step for us in Belize… Eric has been doing great locally so we know that he can hold his grounds and do well. He is one of Belize’s fastest and best swimmers right now and we believe he is a world class athlete,” said Alamilla, who is coaching Donis.

“I would like to thank everyone who has been providing me with support. Special thanks to Clive Welch who has been helping me with my gear and also have been giving me the spiritual guidance I need to prepare. I thank Giovanni Alamilla for giving me this opportunity to represent the country,” said a very humbled Donis.

At 17 years, Donis is one of the youngest athletes in the triathlon discipline and will be amongst 165 other Belizeans who will travel to San Jose, Costa Rica in various disciplines at the Central American Games. The San Pedro based athlete will leave Belize on March 7th, compete on March 9th and return to the country on March 10th.

The San Pedro Sun salutes this impressive young man, and joins the community in wishing him all the best in the Central American Games.