The San Pedro Veterans Football Club became the champions of the National Over 40 League on Saturday, October 7th, after defeating Mango Creek Veterans 2-1 at the Ambergris Stadium. It was a historic moment for the island athletes and community, to capture their first national football title at their new stadium, inaugurated less than six months ago. The tight, action packed game saw the best of both teams, who took the match into injury time before a champion could be crowned. 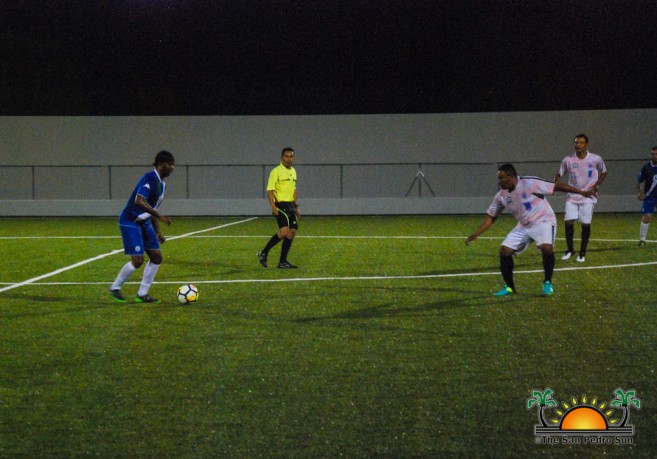 The championship game kicked off at 7:30PM, with a large crowd of football fanatics cheering loudly in support of their favourite team. As soon as the ball began rolling on the pitch, both teams went strong on the offensive, determined to control the game and win the championship. Mango Creek Veterans had the control of the play in the first minutes of the match and at minute 8 a penalty shot was called out in their favour. The Veterans’ goalkeeper Alden Agustin tried to block the shot, but Mango Creek’s Wilmer Garcia managed to net the first goal of the game. 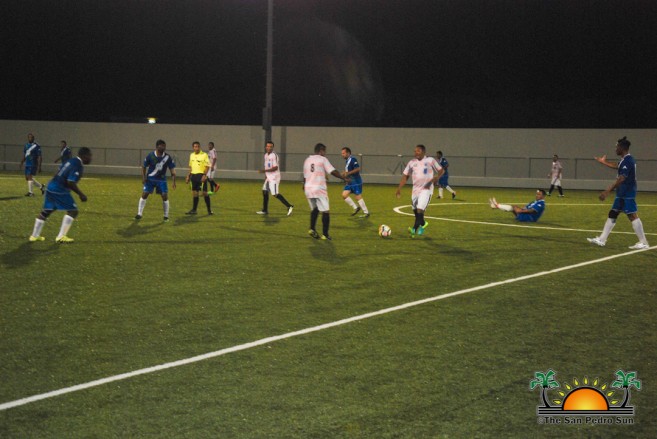 The pressure intensified on the home team, as fans yelled from the bleachers in support, demanding a goal. It took only five minutes for the San Pedro team to tie the game, following a powerful shot by Edgar Lima at minute 13. The Mango Creek Veterans tried to make a comeback and made several attempts to score another goal, but were met with strong defence from the island team and the game ended 1-1 at half time. 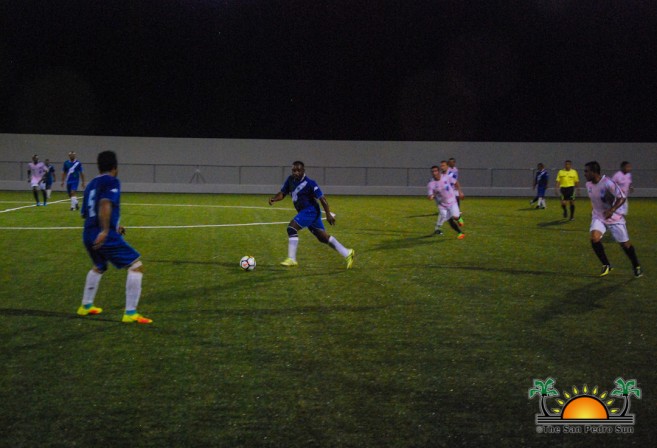 During the second half of the game, the San Pedro Veterans took control, giving the visiting squad little room to move around on the field. Despite their determination, none of their attempts yielded a goal. Mango Creek had several opportunities to score, but San Pedro’s Agustin effectively blocked their attempts. At the end of the second half, the game was still a tie, thus, 30 additional minutes of injury time were played in order to determine a winner. 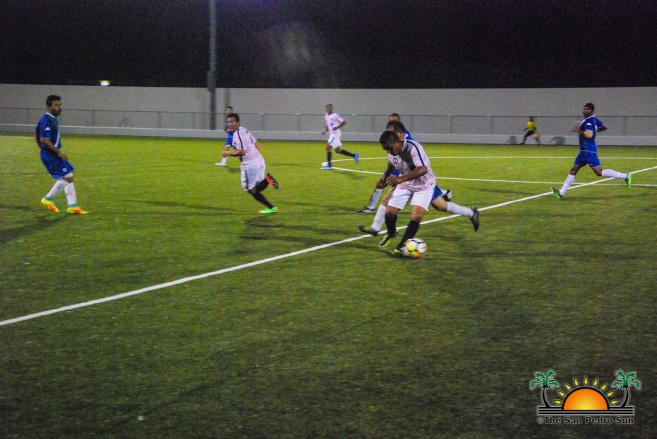 In the first 15 minutes of extra time, Mango Creek kept trying to score their second goal of the match, but had no luck. The San Pedro Veterans saw an opportunity however, and with a cross shot by James Sanchez, goal number two landed. The stadium jolted as hundreds of San Pedro fans celebrated loudly. 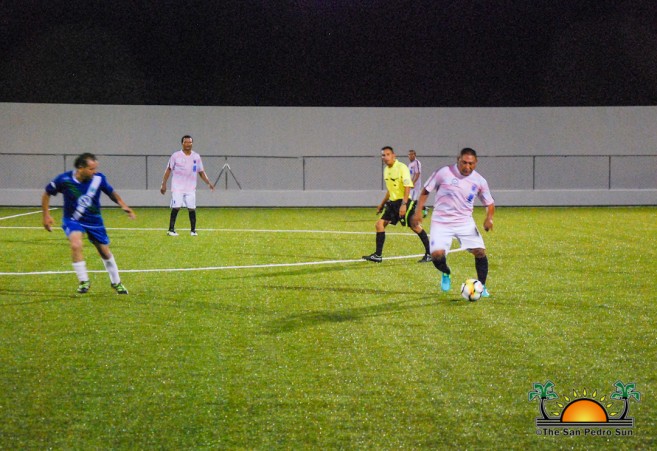 With 15 minutes left, both teams got more aggressive, but no more goals were scored. At the end of the long whistle, San Pedro Veterans had won the match 2-1, and thus were national champions for the first time. 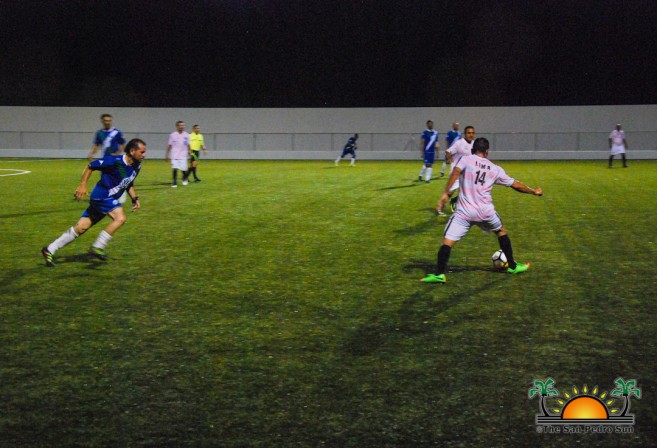 According to Billy Leslie from the San Pedro Veterans, this title is one that everyone should remember for generations to come. “After several attempts in the past to give San Pedro a national football title, we are happy that finally that day has arrived,” said Leslie. “This is also a good example of what hard work can give you, because we worked hard for this championship.” He also added that since the inauguration of the new Ambergris Stadium, football on the island has been taken a higher level. 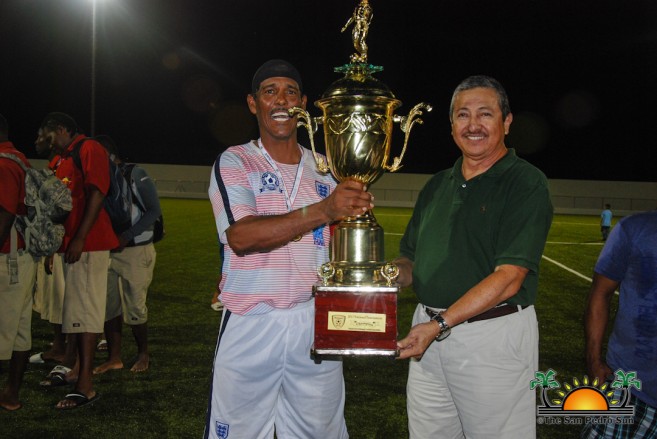 Mayor Daniel Guerrero said that the team deserved the championship, and he feels thrilled that San Pedro Town now has a national football title to defend and be proud of. 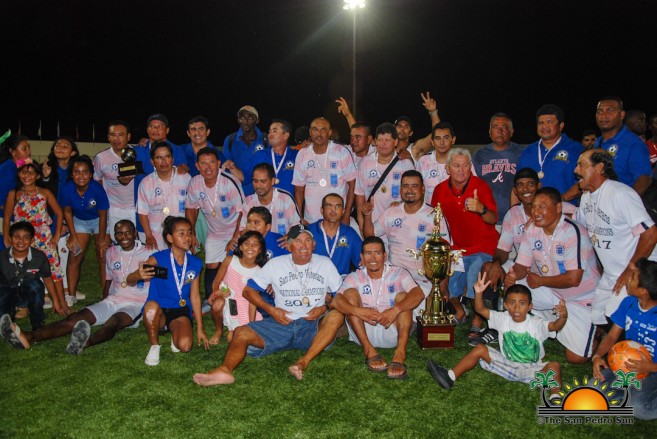 Following a couple words on behalf of the Belize Football Federation, which congratulated both teams, the teams and individual players were then awarded.
The award for Best Midfielder went to Robert Muschamp from Mango Creek Veterans, followed by his colleague Wilmer Garcia, for Best Defence. 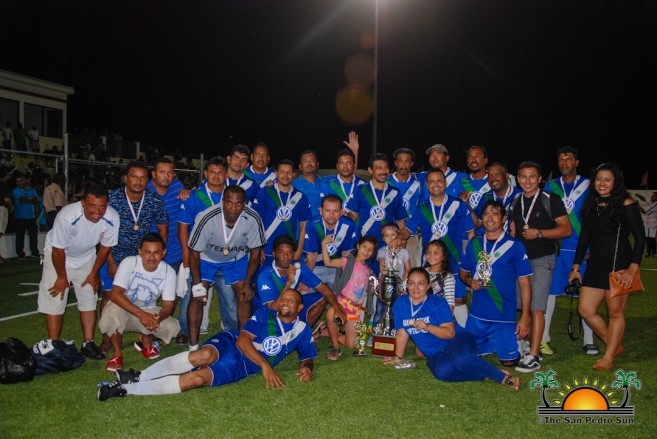 Best Goalkeeper trophy went to San Pedro Veterans’ Alden Agustin and the award for the Most Valuable Player of the League went to San Pedro’s Orlando Pinelo.
After the individual awards, the teams were given their trophies. Sub-champions Mango Creek Veterans received their second place trophy and a cash prize of $1,000. Taking first place trophy and a cash prize of $2,000 was the new champions of the National Over 40 League, San Pedro Veterans who celebrated the victory with their fans.