The San Pedro Roman Catholic School has quietly been the location for an unorthodox pickup game of hockey. Played on concrete rather than on ice, two games are held every Thursday where kids play at 3:30pm and the adults take over at 4:30pm. After the bell, students participating run to the court and sweep it off, a precursor to the game that organizer Justin Lambert insists on. 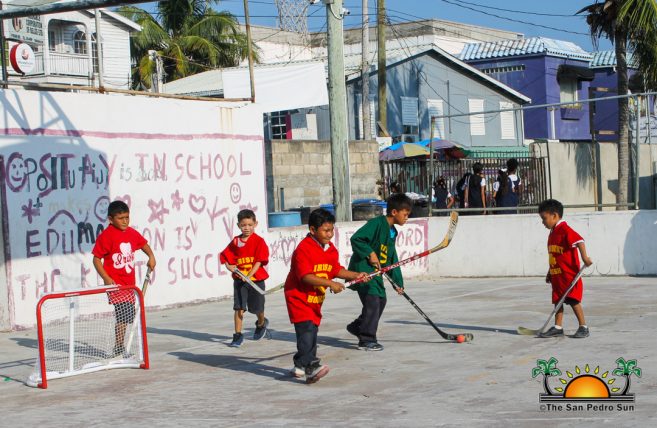 Mr. Lambert is a business owner and organizes the game with a team of other business owners on the island. It started off as games played just for fun amongst friends. However, Lambert saw the opportunity to introduce the game to kids and provide a positive and healthy after school activity to partake in. His alma mater, Rosemount High School in Rosemount, Minnesota, USA donated all the equipment and jerseys the children use. After they are sport their colorful jerseys, they’re separated into different groups and assigned to one of the adults. They learn fundamentals of the game and practice moves against one another. After warming up, the game begins until the time is up. One student said it’s what he looks forward to the most in the week.

The adults or as they call themselves, “The San Pedro Buccaneers,” play a more intermediate level that is open to anyone interested. Their passion for the game even brought about the annual “Coconut Cup”- a hockey match between the Buccaneers and a team from Canada played at the Angel Nuñez Auditorium. Organizers Justin Lambert and Vic Murphy spoke about future fundraising to achieve the team’s long-term goal of refurbishing the court at the San Pedro RC School. The public is invited to take part in any of the weekly games and can contact the organizers via their public Facebook group, “Hockey Night in San Pedro,” for more information.