Belize continues to ride the wave of the record-breaking overnight tourist arrivals that awed the Belize Tourism Industry in 2011. Last year’s success spawned an outstanding momentum that has resulted in an impressive 7.4% spike over 2011’s figures for the first five months: January to May, which all points to yet another jaw-dropper for the Jewel.

This impetus has also done wonders as it pertains to airport arrival numbers, which accounts for over 70% of the overnight arrivals. These landmark figures are, of course, worthy of our attention and perusal; thus, we have taken the time to elaborate on these key facts below.

As can be seen in Figure 1, January truly played its role as the leading month, as it kicked off 2012 with a stellar arrival number of 24,263 visitors to Belize! This represented a 2.9% increase from last year.

But, while January was quite impressive, February, with a total of 25,778 visitors, clocked in with a laudable 8.1% increase over its predecessor. Nevertheless, it was Belize’s windiest month, March, that blew us all away with its history-making total of 32,240 visitors. It must be underscored that this is literally the first time in history that Belize’s overnight tourist arrival numbers exceeded 32,000 visitors in any one month!

March’s success is truly outstanding, because the closest runner-up to this paragon was way back in March 2007, when Mother Nature’s Best Kept Secret hosted 31,267 visitors.
In April, 23,699 overnight visitors were recorded. This figure surpassed the 23,585 recorded during the same period in 2011.

Now, it must be said that while May hasn’t topped the list like March did, it can’t be ignored that the month truly proved its right to house the Labor Day holiday, as it worked its way up to a 13.1% growth over its 2011 counterpart. Another look at Figure 1 will make this point clear, as this year had a total of 21,824 visitors, trumping over last year’s 19,289. 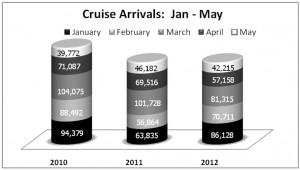 There have been consecutive increases in cruise arrival numbers since November of 2011 and in January 2012, Belize boasted 86,128 cruise visitors representing a 34.9% increase. This is a total of 22,293 more visitors compared to last year at that time. In February 2012, there were 70,711 cruise visitors which was an increase of 13,847 cruise passengers. In March, April and May of 2012, the cruise industry saw a decrease in Cruise Arrivals. Cumulatively, a 0.2% decrease in tourist arrivals has been recorded for the period of January to May of 2012 compared to the figures of the same time in 2011.

On Average, 72% of overnight visitors come to Belize through the International Airport. This implies that visitors through our main port have the largest effect on the overall performance of the overnight sector on a monthly basis.

In January 2012, there were a record number of arrivals, which totaled 18,558 visitors. This represented a 10.47% increase in arrivals in January, which was immediately followed by a record high in arrivals for the month of February. In fact, February saw 20,450 overnight visitors through the airport. This was represented by a 12.6% increase over February last year.

Records were broken yet again in the month of May, which had a total figure of 17150 visitors, presented an overwhelming 20.3% increase over the previous year.

Margaritaville Resort on schedule to open on Ambergris Caye in 2020

National Sustainable Tourism Policy looks at the next 10 years