The San Pedro Town Council (SPTC) has embarked on an ambitious project in which they intend to widen and properly open the main streets and all beach access points on northern Ambergris Caye. The approximately seven-mile project will be a long-term undertaking, and according to the SPTC, it will be financed through municipal taxes collected from islanders. Even as the project is moving forward, with a few residents registering their discontent, The SPTC remains steadfast that it will benefit the tourism industry on the island since resorts will have an upgraded and proper road facility. 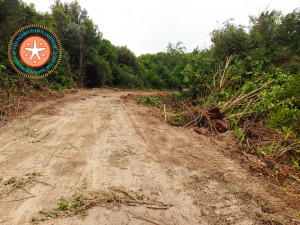 San Pedro Town Mayor Daniel Guerrero did not disclose the value of the street project but responded to questions raised in regards to residents’ discontentment in the new projected embarked by the municipality. “This project can take between a year and perhaps even more. We will not stop work until we reach Costa Maya Reef Resort on northern Ambergris Caye. The council will also be cleaning all the easement/road access to the beach. We will clear the entire width of the road that is legally a part of government,” said Guerrero. In some areas, the width assigned to roads ranges from between 25 to 35 feet. In addressing the concerns of the residents Guerrero said, “We notified the residents of the area and we even met with some of residents of the Tres Cocos Area. We went even further north telling them that they need to pull out

anything that they have outside their fences. If these people wish to do landscaping and so forth to enhance their property, they must do it within their properties. We have indicated that we want the full width of the road clean. We are respecting property markers so no one can come in and complain that we are going into their properties. We must be able to give beach access to everyone on the island. The reason we are expanding the width of the road is that we will be investing in putting down material (hardcore). We want to ensure that hotels and resorts have proper road access as well,” explained Guerrero. He also said that better roads will make the work of security forces better when responding to crime or even for patrols, thus making the area safer. Guerrero said that by enhancing the condition of the northern road, it will lead to an increase in economic activities on the island.

The Mayor also noted that once there are proper roads in place and beach easements, traffic on the beach in front of resorts will also be expected to slow down. “People will have no excuse to drive and ride on the beach, they will have good roads and clear beach access,” pointed Guerrero. 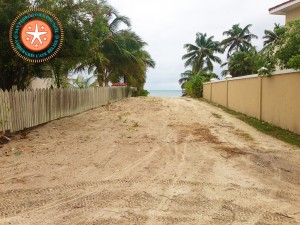 And while a handful of northern residents are not too happy with the new project, the Mayor is also faced with a few criticisms from residents within San Pedro Town about the neglect of some streets in some areas. “I accept the critics from those within town. But I will say, however, that we have to service the entire Ambergris Caye, not just the town. It was similar to the criticism when we were fixing a particular area in town at the same time residents in other areas such as San Mateo wanted us to concentrate in their area. It’s just a matter of servicing areas of priority first. The reason we are moving up north is because that is where the big monies are coming from. For the town to survive we depend on the investments from the northern portion of the island. We both need each other to survive in the tourism industry. The road will just stimulate the economy for the island and I think that it is a good investment. I feel embarrassed when you have tourist driving through swamp, mud and dirty water while staying at a luxury resort. This will enhance our tourism product” explained Guerrero.

The SPTC indicated that the project will stop near Costa Maya Reef Resort in the Mexico Rocks Sub-Division. The first phase of the project will see the widening and opening of the streets, after which hardcore material will be placed. In the swampy areas, boulders (big rocks) will be used as part of the foundation. There are also plans, for the near future, to conduct a similar project on the southern road all the way to the Boca Ciega Area located on the southern end of the island. The street project is being supervised by Councilor Severo Guerrero Jr. whose responsibility includes Civic and Infrastructural Development.

From El Divino to Pineapples- In pursuit of delicious lobster26 Photos