Home » Weather » Belize shaken after an earthquake in Chiapas, Mexico

Belize shaken after an earthquake in Chiapas, Mexico


Effects of an earthquake which occurred near Tres Picos, Chiapas, Mexico on Thursday, December 17th at around 1:49PM were later felt across Belize. The magnitude 6.4 earthquake shook 19 miles northwest of Pijiapan, Mexico and 72 miles deep. Even though the tremors experienced in Belize were not strong, many were surprised as to what had happened. 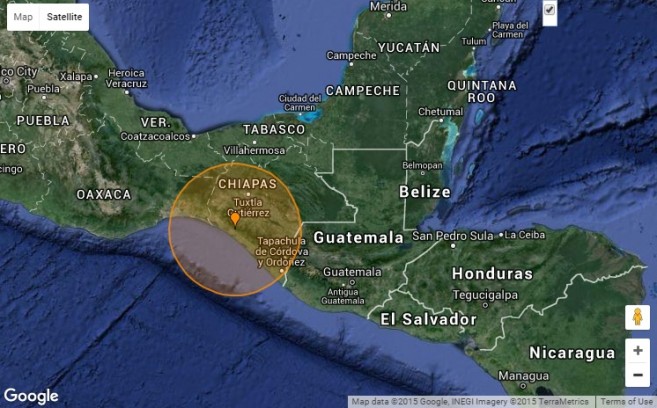 Initially, the United States Geological Survey (USGS) reported the earthquake to be at a magnitude of 6.6, but later modified their calculation to a magnitude 6.4. The full strength of the tremor was most felt in the southern Mexican states of Oaxaca, Chiapas and Tabasco. Witnesses reported feeling the earthquake throughout Mexico and as distant as Guatemala City and Belize. The USGS estimated that around 22.1 million people experienced the shake of the earthquake though out Mexico, Guatemala and Belize. Since the earthquake struck on land, no tsunami threats were issued.
Here in Belize, residents from the Belize and Cayo districts report to have felt the strongest tremor. In an interview with Channel 5 News, Belize National Metrological Service Forecaster, Francisca Wellington explained more on the occurrence. “We have a program here at the met service that as soon as there is an earthquake, it’s registered. It pops up on our screen and it’s able to tell us the exact location of the epicenter, the magnitude of the earthquake and how far it was from Belize,” said Wellington. She also explained why these distant tremors are felt in Belize. ““What we feel are the tremors from the epicenters of earthquakes that happen close to us; for example in regions such as Guatemala, Mexico, Honduras and in the Caribbean as well. So we wouldn’t feel the direct impact of an earthquake, but we will feel the tremors. If the epicenter is close enough to Belize, it will feel very strong, intimidating and even frightening.”
The earthquake caused only minor damages and no reported fatalities and injuries.