On Tuesday, December 5th, Mayor Daniel Guerrero welcomed to his office the top three winners of the San Pedro Town Council (SPTC) poster competition. The competition was organized among the primary schools of the island. The students’ posters were showcased during Township Day on Monday, November 27th. After reviewing dozens of submissions, the team at the SPTC selected the top three posters crafted by students.

Mayor Guerrero congratulated everyone for submitting their posters and commended the students for their creativity. Students had to create a poster illustrating San Pedro Town in the past, and how the municipality has evolved into the large town it is today. According to the Mayor, all submissions were winners, however, only three could be awarded. 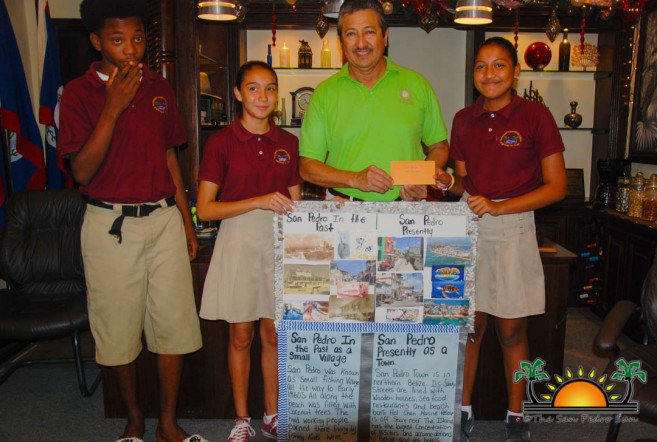 First place went to three winners, Ashlee Wallace, Genieve Ramirez and Jay Arzu from Isla Bonita School. They were awarded a cash prize of $150. In second place was Lauren Turley from The Island Academy, who was awarded a prize of $75; receiving the prize on her behalf was teacher Claire Kennedy. The third place had two winners from The Island Academy and came with a cash prize of $50. The winners were Madison Edwards and Grabriella Knox.

The SPTC thanks, all participating schools in this year’s poster competition during their Township celebration. They look forward to hosting the event once again in November of 2018.

Wine De Vine hosts reading of “A Wager of Wills”