On the evening of Saturday, January 11th, island residents enjoyed a rare treat; live Chamber music from Austrian and international musicians. Held at the Paradise Theatre, the Belize Academy of the Performing Arts (BAPA) ensemble performed an eclectic collection of compositions from Fiorillo, Mozart, Rossini, Kummer, Reneau and even a piece composed by Belize’s Governor-General Sir Colville Young. A piece for violin and cello from their conductor and pianist Ako Banlaky was also performed.

The talented group of world-renowned musicians included cellist Peter Illavsky, Jacqueline Kopacinski on violin, Jaroslav Meluzin (Mexico) on viola, Lois Robinson (USA) on double bass and Belizean soprano Kanie Herera who performed a few classical and nostalgic songs like My Funny Valentine, and I Could Have Danced All Night accompanied by Blanlaky. The audience was especially impressed by the Duo of Austrian Composer Franz Ippisch (1883-1958) who lived in Guatemala for 20 years.

Guests at the well-attended event were also treated to entertaining introductions to the pieces by director Illavsky, who also sang while comically spinning his cello during a solo.

Youngsters in the audience were also invited to the stage during the performance and allowed to learn more about the instruments and visit with the musicians during intermission. 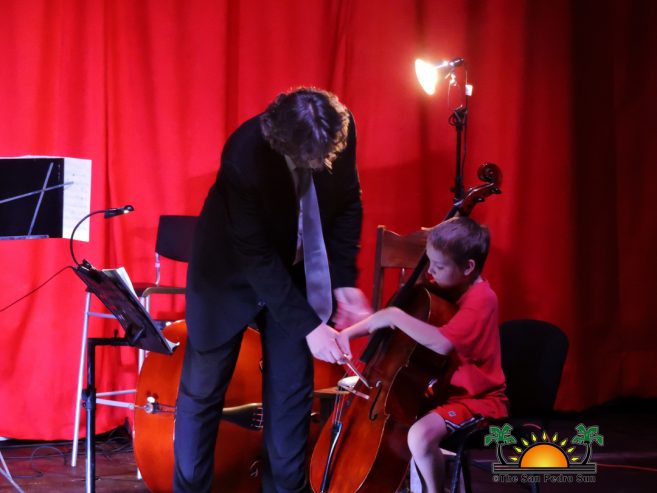 A second San Pedro performance was held at Living Word Church’s at the Sunday service.  The congregation, as well as guests, were treated to several musical compositions and vocals from Ms. Herrera. In addition to performances at the Baron Bliss Auditorium and the Mexican Institute of the Mexican Embassy, Belize City prior to arriving in San Pedro, the BAPA musicians will be going to Guatemala on a “friendship” tour to perform in Guatemala City January 20th and 21st.

BAPA was established in April 2019 by Belize’s Governor General Sir Colville Young and Attorney Joel Nagel, resident of San Pedro Town and chairman of Caye International Bank Ltd with the goal of creating a high-caliber, professional national symphony in Belize and to strengthen and expand music education throughout the country. Consisting of classically trained musicians, as well as Belizean music teachers and students, cellist Illavsky is directing the organization. During the month of January BAPA is hosting a series of concerts as well as music training for teachers and students.

These events would not have been possible had it not been for the support of the Austrian Government and Austrian Embassy in Mexico which assisted with travel and venues to play on mainland Belize; Attorney Joel Nagel and Michelle Duncan of Nagel & Associates, Caye International Bank, and ECI Development which locally sponsored this event and provided logistics, Grand Baymen Gardens for lodging, Ande Woods of AW-SOME Productions for promoting the event island-wide, Austin Pierce of Paradise Theatre and Pastor Ian Zaldivar of Living Word Church.