The 2013/2014 sugar cane season in Belize is in limbo as a result of a dispute between the milling company, Belize Sugar Industry Limited (BSI) and over 5,300 cane farmers. The main contention is that cane farmers are demanding a share of the income from the bagasse (the fibrous matter that remains after sugarcane stalks are crushed to extract their juice) that BSI burns to produce electricity. The factory has announced that as of November 25th, the company was ready to mill sugarcane, but it has not been possible as the standoff has only picked up more steam.

In 2007, BSI, through Belize Cogeneration Energy Limited (BELCOGEN), decided to turn bagasse into energy. Bagasse was considered a waste and had cost BSI millions of dollars to dispose of over the years. But BSI was able to invest over US $61 million dollars, the single largest private investment in Belize; bringing BELCOGEN to fruition by burning bagasse into energy.

Cane farmers had been paid for sugarcane based on world international sugar prices influenced by the European preferential market. But because BSI has managed to make returns on bio-fuel, cañeros have indicated that their sugarcane has more value.

Belize Cane Farmers Association (BCFA), both the Corozal and Orange Walk divisions met on Sunday November 24th at the Escuela Secundaria Technica Mexico for their Annual General Meeting (AGM). According to the Vice President of BCFA Alfredo Ortega, during the AGM, both divisions gave their leaders the mandate to call for a strike if their demands are not met. Ortega stated that cane farmers have mandated that they will not deliver sugarcane if there is not an agreement on the share of profits from the bio-fuel that BSI uses to operate the boilers and sells to Belize Electricity Limited.

“The farmers passed a motion reiterating what the two divisions had passed on the 2ndand 10th of November, whereby they have placed on our shoulders the negotiations with BSI and that there would be no deliveries if we are unable to finalize a negotiation to sign. What we will be doing this week is send a letter to the Prime Minister to intervene in this issue. What we are seeking for, as cane farmers, is to finalize this issue in as friendly a manner as possible without going through any issue that would be detrimental or negatively impact the industry… We have been calling for this negotiation since 2010 asking BSI to come and negotiate. Since there were some financial problems that BSI encountered during that time, BCFA decided to delay negotiation. We sent our proposal to them in December of 2012, so that we can finalize this situation before we reached to this date,” said Ortega. 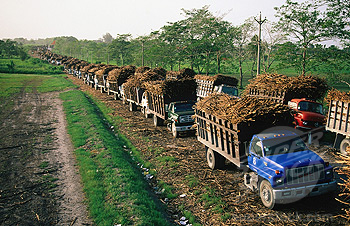 Last year BELCOGEN reported revenue of $20 million from the production of energy, and the farmers have been eyeing the pie for a fair share. But BSI has not been entertaining those talks and stands firm that the investment to turn bagasse, (previously considered waste material) into energy was as a result of the company’s initiative after seeing the loss being incurred by disposing of it naturally. “[This is why] we are seeking the intervention from the Government, because we have seen that BSI is dragging their foot on this issue. They don’t want to negotiate in regards to the bagasse. They are coming with a flat ‘no’ in regards to this issue, and we are saying come let us negotiate,” highlighted Ortega.

The sugarcane industry is one of the country’s main revenue earners, providing employment to almost 30% of the country’s population, mostly those in northern Belize. Any unsolved problems in the sugar industry could have serious financial implications for Belize’s economy. But what will happen if BSI does not agree to negotiate and cane farmers remain steadfast in their demands? “I think that they have shouted in unity that they are committed not to deliver any cane until we finalize this negotiation from BSI, so the farmers are very serious. And they have said very clearly that if there are farmers that want to deliver, those farmers will be penalized in one way or another. They won’t be getting any benefit once we get the benefits from bagasse. Also the membership have said that those farmers that want to deliver within that period of time that we have called for non-delivery, they will be placed on the very end of the season to deliver list,” cautioned Ortega.

Readers may recall that last year, American Sugar Refinery (ASR) took control of BSI, making it a record breaking year for sugarcane in Belize. On Tuesday November 26th, BSI officials called a press conference where the issue was addressed in length. According to BSI Chairman Arsenio Burgos, the company has incurred losses over the past 30 years getting rid of bagasse.”Farmers sell the sugarcane to BSI; the sugar, the water, the fiber, mud and all. The sugarcane is then the property and responsibility of BSI. BSI spent $20 million over the last 30 years for such storage and disposal and continues to bear the cost. BSCFA would never have entertained such costs. BSI’s position is that the revenue from electricity sale cannot be described as a sale of a bi-product and that the source of the revenue is really a productive way of what BSI has been doing all the years on its own – disposal of the bagasse. Since there is a fundamental disagreement between the parties then the proper place to determine the dispute is in the courts.” BSI claimed that if sugarcane is not delivered within the next three weeks, the consequences will be far more detrimental to the industry and the country. According to the company, recovering from losses because of the cane farmers’ position would take over four years.

And while the cane farmer’s demand for a piece of the returns on the bagasse is one thing, so are the conditions of the sugar roads in northern Belize. Even if the bagasse contention was not in the picture, cane farmers would be unable to deliver sugarcane – that’s because the roads are inundated and the conditions are extremely hazardous, making it next to impossible to transport sugarcane.

Oscar Alonzo, Chief Executive Officer of BSCFA spoke of the roads following the AGM. “The major challenge right now is the infrastructure…the roads. The roads are in a very deplorable state, and especially with the rains. It’s true that there have been funds under the EU Accompanying Measures for Sugar and we have to try to see how we can improve the main arteries, but I think now we’re having problems with the roads that feed into the sugar cane. What we have seen is that the money has been provided to the Ministry of Works but it is the political representatives sometimes that have more control of it. We have asked to be involved so we can see that the roads that are really priorities can be dealt with. We can’t fix every road…that’s impossible. But at least what we fix we fix properly, and so every year we keep improving the network of roads that don’t require yearly repair.”

For each 10 tons of sugarcane crushed, a sugar factory produces nearly 3 tons of wet bagasse. Bagasse is often used as a primary fuel source for sugar mills; when burned in quantity, it produces sufficient heat energy to supply all the needs of a typical sugar mill, with energy to spare. To this end, a secondary use for this waste product is in co-generation, the use of a fuel source to provide both heat energy, used in the mill, and electricity, which is typically sold on to the consumer electricity grid.