After a three month hiatus, the 2016-2017 fishing season of the Queen Conch (Strumbus Gigas) officially re-opened on Saturday, October 1st. Every year, conch represents a significant source of revenue for traditional fishermen, and its harvesting generates millions of dollars for Belize’s fishing Industry. The season runs from October 1st until June 30th of the following year. However, if the conch quota is met before the season ends, then the Cooperative Department of the Belize Fisheries Department (BFD) has the right to close the season early, which they did last year.

According to Adriel Enrique Castañeda, Fisheries Officer at the BFD, the 2015-2016 conch season produced 794,369 pounds. As for how much revenue was generated, he stated that the quota allocation will vary depending on the results of several recent assessments conducted. “The Department recently completed an assessment of the stock and should have results soon on the status of the fishery which will guide us in our predictions and quota allocation for this season,” said Castañeda.
These figures revealed that production greatly increased compared to the 2014 season, when production amounted to only 723,121 pounds. It was estimated that around 10% of the conch harvested was consumed locally, following the mandatory law that 5% of the harvested product must stay in Belize.

Since 1992, Queen Conch has been listed under the Convention on International Trade in Endangered Species of Wild Fauna and Flora (CITES) Appendix II, which has controls on international trade. The export of any specimen of a species listed under this appendix requires the prior grant and presentation of an export permit. An export permit shall only be granted when the following conditions have been met: (a) a Scientific Authority of the State of export has advised that such export will not be detrimental to the survival of that species; (b) a Management Authority of the State of export is satisfied that the specimen was not obtained in contravention of the laws of that State for the protection of fauna and flora; and(c) a Management Authority of the State of export is satisfied that any living specimen will be so prepared and shipped as to minimize the risk of injury, damage to health or cruel treatment.
To protect the industry further, the BFD is suggesting that establishments request a legal commercial Fisherman’s License from the supplier when purchasing conch for consumption. This practice will encourage fishermen to abide by the law, since persons with a commercial Fisherman’s License are the only ones authorized to catch conch. 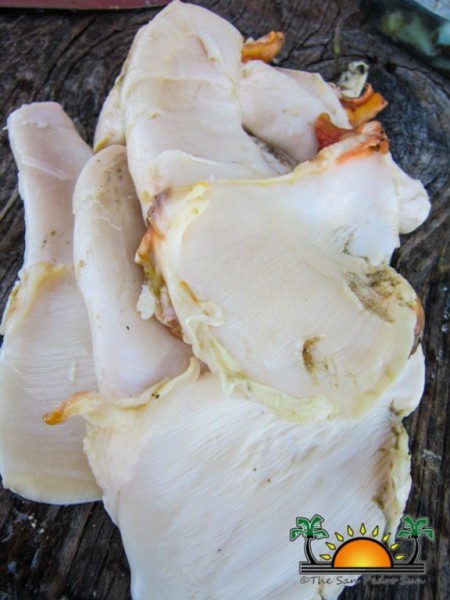 The general public is also advised that the Queen Conch shell should exceed seven inches in length, and that establishments should not have diced conch meat in their possession. For conch flesh that has been processed as market clean, the weight should exceed three ounces, while filleted flesh which is completely processed white meat should exceed 2.75 ounces.
Failure to follow these regulations, whether it pertains to illegal harvesting of conch or possessing undersized conch, will be subjected to penalties. According to the Fisheries Act 15(1), penalties should not exceed $500 or imprisonment not exceeding six months, or both such fine and imprisonment. Guilty persons of the offence may be processed by a judge to an individual charge per conch, which normally is around $50 per conch.
To avoid counteractions with the law, the BFD asks the general public to abide by all the Fisheries Regulations. They also encourage all responsible citizens to report any infractions by calling 224-4552 or Crime Stoppers Belize at 0-800-922-TIPS (8477). Reports can also be made via email to [email protected] All information provided will be treated with strict confidentiality.

Santa Elena Football Complex and Facilities to be updates