After the BZ$1.83 billion 2018-2019 national budget was announced on March 9th, it was debated from Thursday, March 22nd to Friday, March 23rd at the House of Representatives. On Tuesday, March 27th, the Senate responded and approved it. During both sessions, the budget proposed by the current administration of the United Democratic Party (UDP) was heavily criticized by members of the Opposition and sternly questioned by some of the members in the Senate. The sentiment was that the budget is ‘more of the same,’ with little incentives for the poor or the growth of the country’s economy. 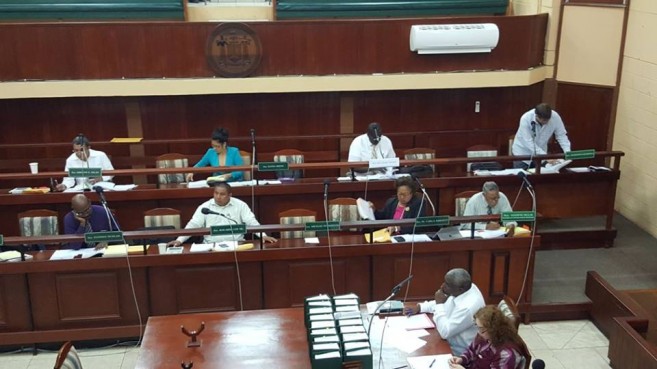 After the two days of debate, the Leader of the Opposition People’s United Party (PUP), Honourable John Briceño characterized the budget as one that had very little for the needy of this country. He pointed out that domestic debt has gone from $321 million to over one billion dollars. An increase that has grown since 2007 bringing the increase to over 318%. “The Government has no plans for growing the economy,” said Briceño. “This budget is a farce because the numbers simply do not reflect any of the priorities.” The priorities highlighted included education and opportunities for at-risk youth. Briceño claimed that the UDP inherited an economy that was growing at around 5%, but under the UDP, growth has slowed to 2%. “The administration spent millions on cement streets and stadiums,” said Briceño. “The people cannot eat streets and drains.”
He added that the current Government has collected more taxes than any other government since independence in 1981. “And yet they have added $1.3 billion dollars to our national debt. Do not listen to the nonsense that there will be no new taxes; every day they suck more and more taxes at the fuel pump.” Briceño referred to the constant increase in fuel prices for the past months, which he says will directly impact the poor people in the rural agricultural areas of Belize. Briceño pointed out the Government’s intention to add General Sales Tax on data purchases for the internet. “Increasing the cost of data means increasing the cost of information,” he said. “Small business or big business, rich or poor, the internet is indispensable in this increasingly information-driven world. This measure puts all of us at a disadvantage.”
Briceño commented the UDP administration came into power on a platform of zero tolerance for corruption, yet are the most corrupt government event. “If they are tired of governing, they should quit, and if they want to call the elections, let’s bring it,” he told the representatives of the current administration. 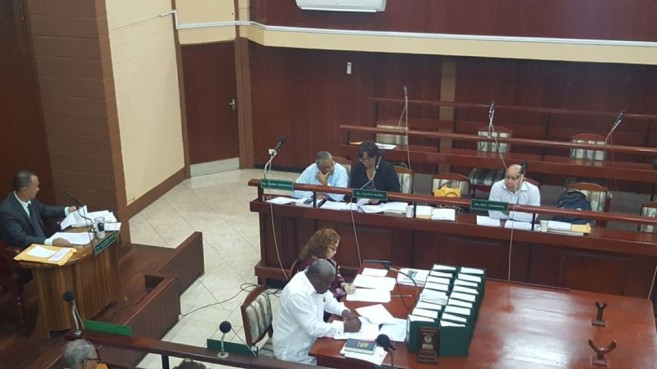 Prime Minister Dean Barrow made his presentation based on the worth of the nationalized Belize Telemedia Limited (BTL), which according to him is worth one billion dollars. “It will earn billions more over the years,” said Barrow. “Let us look at what the Belizean people really paid for the portion of BTL. The Government paid $467 million and nationalized a US$20 million loan that BTL made from the British Caribbean Bank.”
The Opposition explained that the loan went up to $97 million and that in nine years of litigation the Belizean people paid $15 million along with $5 million for traveling expenses for the Prime Minister and other government officials. According to the PUP, Belizeans paid $585 million for BTL, even though Barrow claimed to have sold $23 million in shares to Belizeans. The UDP government has invested a total of $424 million for 73% of BTL, which at the time was valued at $224 million, and that the PUP claims is now only worth $90.5 million. According to the Opposition, Belize essentially lost $333.5 million in the acquisition of BTL. “With an average earning of $20 million dollars per year, it would take BTL 49 years to earn the one billion dollars the Prime Minister boasted about,” Briceño said.
The debate also saw a presentation from the Minister of Defence, Honourable John Saldivar. He supported the budget, noting that his Ministry will benefit by a 2.9% increase from $56.9 million to $58.6 million. Saldivar indicated that the increase will ramp up the operations relating to the deployment of the Belize Defence Force and the Belize Coast Guard assets.
The PUP Deputy Party Leader, Honourable Cordel Hyde also spoke, stating that he did not support the budget, particularly the government’s expenditures for the fiscal year. He also discussed the latest contracts given to foreign entities to manage Belizean assets, referring to BTL and the newly finished Belize Civic Centre. “Under Michael Ashcroft, BTL only had about two foreigners,” he said. “But after it was privatized by the UDP administration it now has over a dozen foreigners.”
He spoke on the amount of money needed to run the Civic Centre and its management. “It will take $850,000 to manage it at a 60% capacity. That works out to almost $4,000 per day to operate the facility.” He condemned the idea that foreigners will manage it when Belize has capable well-trained individuals that can do the job. He ended by explaining that the funds from Petrocaribe could have been given interest-free to young people to start small businesses. “We dream of landing a big tuna, instead of focusing on creating a thousand small businesses,” he said. “Some of these small businesses do not need a lot of money to start up. These businesses may end up employing people and reducing the poverty level and increase the self-respect of the people.” 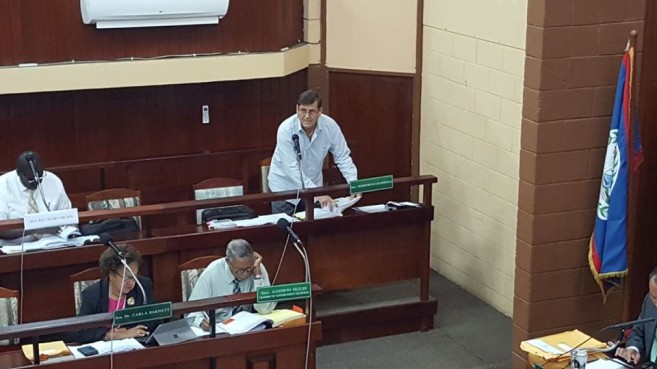 PUP members Kareem Musa and Julius Espat described the 2018-2019 budget as ‘Barrowgant,’ claiming it is not doing enough to address poverty. PUP Area Representative of Orange Walk South, Honourable Jose Mai, expressed disappointment that the budget did not do enough for the productive sector, citing the 100 shrimp farm employees that were laid off on Thursday, March 22nd in southern Belize. The debate finished after 10PM in the evening.
On Tuesday, March 27th, the budget underwent another round of discussion as it was debated by members of the Senate. Business Senator Mark Lizarraga started his presentation by contending Prime Minister Barrow’s admission that the budget has nothing new to offer. “It is yet another budget that is advancing growth, yes, but for those that benefit from the continued borrowing and spending of our growing national debt,” he said. “This budget is nothing but a re-commitment, an appalling threat, for more of the same.” Lizarraga also touched on how much the Government has had to borrow just to balance the budget in previous years. This year’s figure is around $118 million that is being sourced mostly from Taiwan, via previously approved loans and grants. The Senator also believes that the Government personnel is too large and should urgently address this matter by downsizing to curtail excess spending.
PUP Senator Eamon Courtenay described the budget as lifeless, stating that it lacks any muscle to address the problems of the country. He warned of what is coming up for the Belizean people. “There will be a further tax increase in 2018 and 2019,” said Courtenay. “And our analysts believe that during the course of this very fiscal year coming, 2018-2019, Government will have to come back to Parliament with the additional measure in order to try to meet its expenditure.”
UDP Senator Stephen Duncan responded in defense of his Government and the budget by comparing the economic realities under a UDP administration to a PUP one. “As we run a deficit, there is a marked difference between the deficits we saw under the PUP administration and the deficit that we are seeing under the UDP Administration,” he said. “We have used monies to build streets, to build roads, to put the infrastructure in place, to help people pay off their mortgages, write off their mortgages, to help with social programs. But the deficit we are seeing in this administration can be accounted for and there is a clear understanding by the general public as has been manifested by the comments of various senators in this chamber today that those monies were used to do projects in the country for the people.”
After hours of debate, the 2018/2019 Budget was approved by the majority of the Senators. The over $1 billion budget comes into effect on April 1st, which is the start of the new fiscal year.