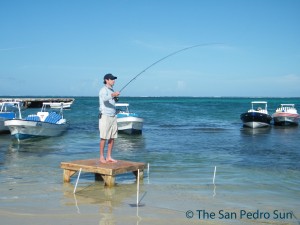 On July 27th seventeen saltwater fly fishing teams descended on San Pedro for the 3rd annual Tres Pescados Slam Tournament with hopes of becoming the next Grand Champion of this international catch-and-release fly fishing event.
After a great kick off banquet Wednesday evening hosted by the San Pedro Lions Club where the angling teams consisting of a Belize Tourism Board (BTB) licensed guide and from one to two anglers received the latest does and don’ts of the competition, the 48 angler/guide team members began the 2011 Tournament Thursday morning with a blast of boat wakes at 7AM from the Central Park pier starting line.
In a sport where the guide and anglers must rely on each other’s skills and a bit of luck from Mother Nature, starting the first day of this three day event with heavy rain and low clouds required the teams to reach in their bag of tricks to come up with points.
The check-in at Central Park at the end of the first day filled the scoreboard with bonefish points for every team but one. Three of the teams found tarpon and were able to bring a Silver King to the boat. Team Pesca con Mosca, guided by Cesar Acosta, jumped into first place with their tarpon and five bonefish, while team Yellow Dog, guided by Nesto Gomez, found themselves in second place and team Fly Treks, guided by Parnell Coc, landed in third place with their tarpon and bonefish. 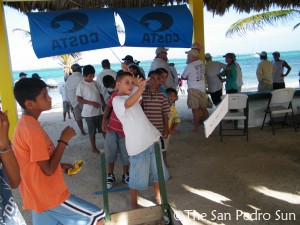 Children try their hand at casting as well.

Day two brought happy faces at the starting line with improved weather, a beautiful flats fly fishing day on Ambergris Caye. With only five of each species allowed per day the teams needed to work on finding permit and tarpon to get onto the upper level of the scoreboard after day one’s tarpon and bonefish releases by three of the teams. Team Pesca con Mosca not only held on to their lead at the end of day two, but they pulled out in front with the release of a permit, a another tarpon and several bonefish – a true daily grand slam. Yellow Dog held on to second place, with team Red House jumping into third place with the release of two permit.
The final day’s start brought another almost perfect fly fishing day in Belize. With teams chasing the Pesca con Mosca team and the four other teams with two species on the board, all knew a second specie, of either a tarpon or permit, was needed to take over the lead. As the teams began reporting in after 3PM it was obvious the last day was not producing the fish needed to overtake the leader. Only one team had a better than usual day on the flats; team Anglers Abroad scored a tarpon and a permit, moving them into the three specie level with the leader and the second grand slam. 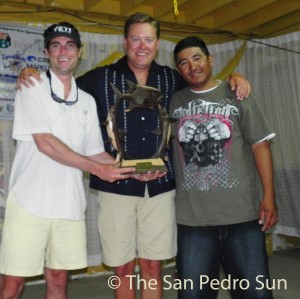 With the daily activities in Central Park over the 2011 sponsors and teams gathered at the Lions Den for the Awards Banquet. The awards ceremony began with the casting competition winners receiving custom Belize built fly rods as their trophy. Moving into the fishing awards, the 3rd Runner Up was team Yellow Dog, Ian Davis and Keith Paar from Bozeman, Montana and the Bahamas, guided by Nesto Gomez with two species and 2,050 points received their trophy along with $1,167 in prize winnings. The 2nd Runner Up, with a grand slam (all three species) and 850 points, team Anglers Abroad – Haywood Curry and Travis Then from Caye Caulker, guided by Ken Coc, accepted their trophy and $2,334.00 in cash. The Grand Champions of 2011, team Pesca con Mosca, Tim O’Brien and Kyle Kulig from Texas guided by Cesar Acosta, came to the stage to accept their trophy and $3,500 in winnings.
The award ceremony concluded with the handing over of a $12,000 donation to Mito Paz of Green Reef for continuation of the Sport Fish program designed to further the protection of these three fish, their habitat and the resource in general.

Looking back at Carnaval, through the eyes of Mrs. Tomasita Gomez8 Photos