The fourth annual Tres Pescados tournament took place with great success over the weekend. The three days of sun and bluer skies provided perfect weather for the yearly anticipated tournament. With a grand prize of $4,000BZ on the line, anglers hailing from near and far headed out to sea daily, some as early as 4:30AM! The objective of the game was to capture the most “Grand Slams”, i.e.: All three fish –Bone fish, Tarpon and Permit. 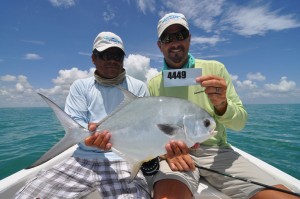 Competition commenced early Thursday morning with 15 boats and some 36 anglers signed up for the tournament. Teams went out daily and brought photos of their catch of the day. Points were tallied and added daily, eventually leading up to the award ceremony on Saturday night, August 25th.
Caprice Bar and Grill saw some 50 or more fishermen along with their family members and friends gathered for the cocktail dinner party followed by the award ceremony.

In third place with zero slams but the most points and taking home Bze$1,500 was Team Pesca with 1150 points. In second place, capturing one grand slam over the three days was Team Fly Treks, which took home Bze$2,500. And the grand prize winners, capturing two slams over the three days, and winning Bze$4,000 were, the Blue Reefers. 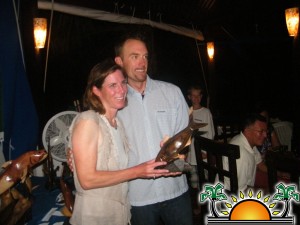 Top Guide went to Parnell Coc, top female angler went to Diana Rudolph and Doug Brady won the prize for capturing the biggest fish. This year, the anglers jointly decided on Bonefish Tarpon Trust (BTT) as their charity of choice. A total of Bze$14,000 will be handed over to BTT and according to organizer, Wil Flack, will be used towards research in habitat protection of the species in Belize.
Next year will mark the fifth year of the tournament and the dates have been set. According to Flack, next year promises to be bigger and better than ever. August 8th through 10, 2013 promises to be grand.