The 9th Annual Lagoon-Reef Eco Challenge came to an end shortly after midday on Sunday July 7th before a large crowd gathered on the beach off the San Pedro Town Central Park. 20 teams had signed up for the challenge and all made their entrance to the finishing line despite one team that had difficulties complete a portion of the competition. Zipping through the finishing line first was the Happy Cow Team from Cayo closely followed by the Sparta Boys.

The two days of competition tested the 20 teams’ ability both mentally and physically as they had the task to kayak 46 miles in two days. The challenge started shortly after 7AM on Saturday June 6th from the Central Park and made its way through the Boca Del Rio Channel. They eventually emerged into the San Pedro Lagoon before kayaking into the various water passages. By 9:15AM on day one, the first team had emerged into the Laguna de Cayo Frances. It took a little over 30 minutes for the first group of three teams to paddle out of the lagoon and into the leeward side of the island. By midday most teams were in the Bacalar Chico Marine Reserve and some were along the Belize-Mexico Border. The three top teams that kept ahead in the challenge by the time they emerged into Laguna de Cantena were the Sparta Boys (Jesus Linarez and Sergio Lopez), Happy Cow (Alfred Lopez and Byron Cruz) and Las Tortugas (Edwin Casasola and Cesar Salazar). Once out of Laguna de Cantena, the teams had to drag their kayak through the 500-yard waist-height hot swampy mud. They then ran with their kayaks, to the east coast of the island, eventually paddling to Robles Point to end day one of the challenge. Sparta Boys finished day one ahead of Happy Cow by only 49 seconds. 19 of the 20 teams finished the first day of the challenge, and despite not completing the first leg of the challenge, female Team Stars (Kiara Gomez and Sarah Alper) did well as first timers in the competition.

Day two saw the kayakers move from Robles Point shortly before 10AM, heading southwards to San Pedro Town. The top three teams that were ahead in day one of competition maintained that position on the second day of the challenge. From the onset, Happy Cow Team, Sparta Boys and Las Tortugas led the competition neck to neck. That was kept for the most part and in a matter of 2 hours 44 minutes and 11 seconds – Happy Cow paddled across the finishing line first. One minute 13 seconds behind was Sparta Boys. It was an unexpected 24-second lead for the Happy Cow team who managed to capture First Place overall while Sparta Boys had to settle for second place.

Full results are as follows: 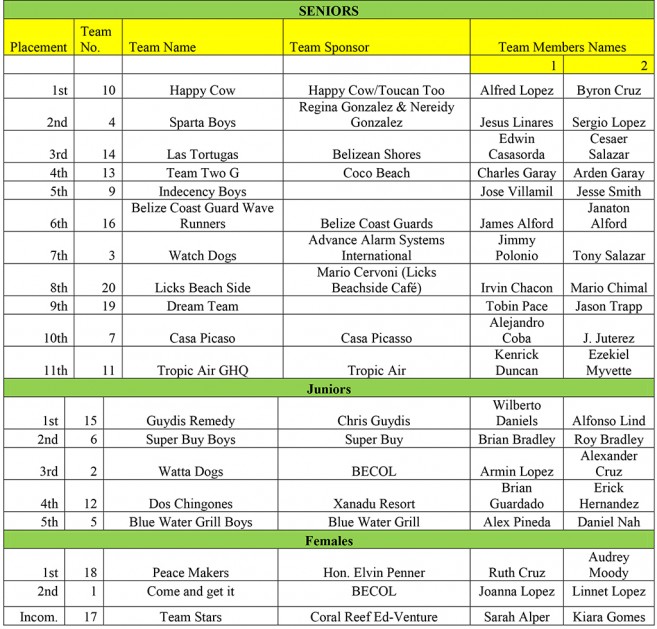 According to Elito Arceo, founding member of the challenge, this year is the first time that almost all the teams completed the challenge. “Actually this is the best year for us. Almost all the teams completed the challenge. I am so proud of the participants. Next year is going to be our 10th year and we are hoping that it is bigger and better. We had international participation. We originally have the competition in April but we had a few problems with the kayaks and so we had to delay it. We are happy that it was a success and we now plan for next year,” said Arceo. The top teams in each category received cash prizes and trophies amongst other prizes. “We are very happy for the support we got from the various businesses. Without their support it could not be possible. We are especially thankful to Doug Penland who supplied all the kayaks,” commented Arceo during the awards ceremony.

The San Pedro Sun congratulates all the kayakers that participated in the challenge and hats off to all the sponsors who make the event possible every year.