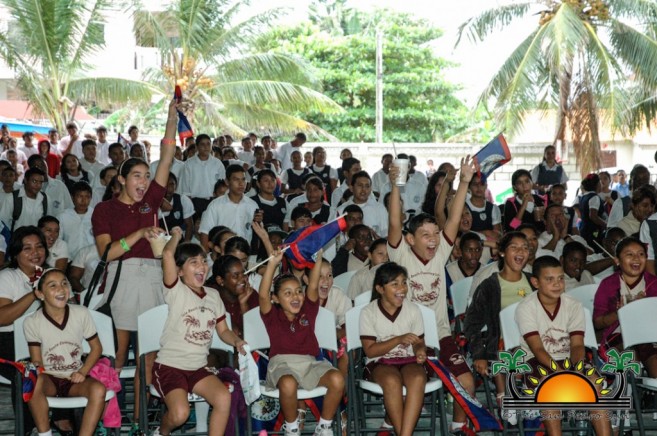 The Ministry of Education Youth and Sports on Friday September 13th hosted students from across the country to the annual Children and Youth Rally. The event was celebrated under the national September Celebrations theme “Belize in You, Belize in Me – Land of the Free.” On Ambergris Caye, the students gathered at the Rafael Angel Nuñez Auditorium where the atmosphere was very patriotic, and included dances and celebration music. 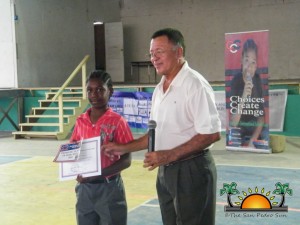 The event was broken down into two segments: the first was the official ceremony and the second part was the fun and entertainment section. During the official ceremony, the students of Ambergris Caye were happy to listen to a 10-minute presentation by Anthony Gill. The 11-year-old Belizean/American is an international motivational and inspirational speaker. His visit with the students of San Pedro Town is part of a countrywide tour and it is his second working visit to Belize.

The engaging Gill spoke to the primary and secondary school students about the choices they have in life and how it can create change, beyond their life, extending to the community. He also stressed on an issue that has been affecting the current youth and student population – bullying. He encouraged the students to stand up against bullying and to make the right choices in life. Following his interesting presentation, Gill was recognized and given a certificate of appreciation by the Minister of Tourism and Culture Honorable Manuel Heredia Jr.

Guest Speaker at the event was the Mayor of San Pedro Town, Daniel Guerrero. In addressing the students, Guerrero took the opportunity to highlight the issue of civic pride. He spoke about the reckless behavior of some residents during special occasion and the lack of pride in community. But he also challenged the students to be better citizens and spoke of good things and changes that can happen if people take more pride in their community and island.

At the ceremony, several members of the community as well as organization and businesses were presented with the first ever Patriotic Leadership in Education Award. The award, given by the Government of Belize through the Ministry of Education Youth and Sports, recognizes the effort of Belizeans as well as the support given to the Ministry and is intended to instill patriotism not only during the September celebrations but every day.

During the second segment of the rally, the students were entertained by the presentations made by various primary schools. There were three main highlights in this event. The first was the re-enactment of the Eve of Independence entitled “From a Colony to a Country” performed by San Pedro High School students who were directed by Alex Nuñez. The second highlight was the musical presentation by Barrington Castillo, a local musician on Ambergris Caye, and a musical segment presented by the winner of the 2013 Carnival Song Competition TR Shine. The third highlight was a sports segment organized by the Youth Coordinator for Ambergris Caye Lincoln Flowers and Professor Paul Kelly. The segment showcased the talented students of San Pedro High School in various sports disciplines. 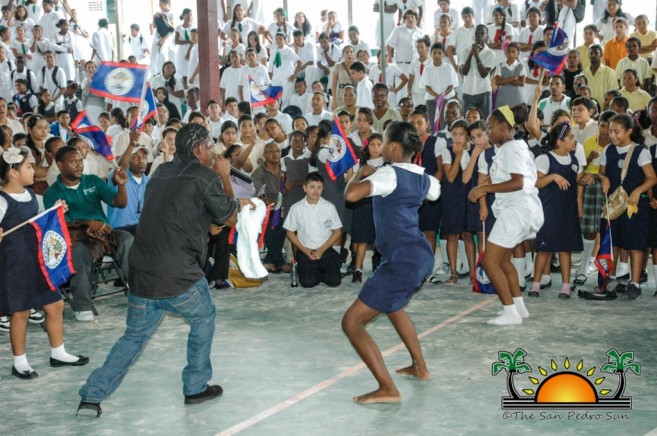 All in all, the students were electrified with the various musical presentations and on different intervals joined in by clapping, shouting, jumping, dancing and waving their Belizean flags. The Ministry of Education took the opportunity to thank the many businesses and people who made the rally on Ambergris Caye possible.

The play “Our World – 1 in 4” captivates SPHS audience6 Photos