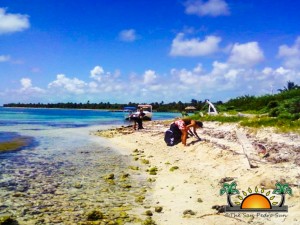 Garbage is a major issue in Ambergris Caye, and as such the San Pedro Town Council (SPTC) is addressing it with much concern. In order to maintain a control on the level of garbage on the island, SPTC has implemented several regulations for households and business on garbage disposal. SPTC has also held several clean-up campaigns in various areas of San Pedro to promote proper garbage disposal, health and sanitation.
In the past few weeks,SPTC began an initiative to dispose of old appliances, branches and large amounts of trash from residents’ yards. So far, SPTC has picked up yard garbage from San Pablo, San Juan, Boca del Rio, the Town Core and north of the bridge. They will now be moving to the southern part of the island. SPTC encourages all residents to clean up their yards of all unwanted trash, and they will do their part in collecting it.
And while the SPTC is doing its part, residents are also taking up the initiative and cleaning up! One such person is John Greer, who, along with his hardworking team cleaned approximately seven miles on the north part of Ambergris Caye from Robles Point to El Secreto Resort. The team gathered approximately 30-35 tons of garbage. In a show of appreciation, San Pedro Town Mayor Daniel Guerrero presented an award of recognition to Greer, on behalf of the people of San Pedro Town for his effort.

Meanwhile, on Saturday, November 2nd, SPTC will be hosting a shoreline clean-up campaign from Boca del Rio to Victoria House. The campaign will be from 6AM to 10 AM, volunteers are asked to meet up at The Central Park. Heading the campaign is Councilor of Waste Management and Traffic, Kenrick Brackett. “SPTC is trying to do their very best to keep San Pedro clean. We are asking the business community and residents to come on out and help clean up our beaches. We are working hard to clean up the island, but we cannot do it alone, we need the support and assistance of the people,” said Brackett. All residents and businesses are invited to participate, garbage bags will be provided.