Originally from Belize City, Kyle Serano is a recent graduate of the Belize Police Academy, PC number 1661. The San Pedro Police department is PC Serano’s first assignment after training. “I had never been to San Pedro before this. I am looking forward to the experiences I will gain here. I hope to do my job effectively, and hopefully grow in the ranks of the police department.” PC Serano enjoys reading and is excited to learn about Ambergris Caye.

Also from Belize City, Raheem Neal, PC number 1635, is on his first assignment after graduating from the Belize Police Academy. Similarly to PC Serano, PC Neal has never been to San Pedro prior to being deployed to the San Pedro Police Department. “I really want to experience the culture of San Pedro, especially fishing. As a police officer I want to my job to the best of my abilities and uphold the responsibilities that come with the job,” said PC Neal. 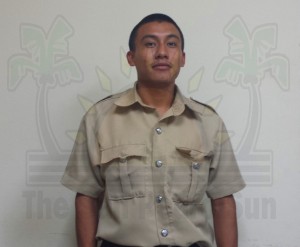 Also on his first assignment as a police officer is Daniel Uh. Uh, PC number 1672, is a recent graduate from the Belize Police Academy who is looking forward to serving with integrity and honesty. Uh is originally from Cristo Rey Village, Corozal District. He enjoys playing football and being active. “When I was looking for employment, I wanted it to be something where I can earn money but serve my country at the same time. That’s why I chose to become a police officer,” said Uh.

WPC number 1672, Veralina Rivas, is also a recent graduate from the Belize Police Academy. Rivas is no stranger to San Pedro Town, since she has lived here for the past four years. Rivas was previously a kitchen assistant. “Working in the tourism industry, there is always the off season. As a mother of two, I wanted a more stable job in which I could grow and learn. I believe that the police force has more opportunities for me,” said Rivas. Rivas is currently attached to the traffic department but finds crime scenes the most appealing part of working with the police.
The San Pedro Sun welcomes the new officers to Ambergris Caye. May your time in duty in La Isla Bonita be a pleasant one! 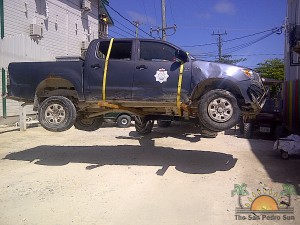 A decision has been taken to remove the unsightly broken down police vehicle from in front of the San Pedro Police Station. Luis Castellanos, Officer in Charge informed the media that the image of the vehicle parked in front of the station was certainly an eye sore to the public and visiting tourist. “On numerous occasions, tourist would take pictures and even visit the station asking if the vehicle was for sale. San Pedro is a major tourism destination, and as such, it was kind of embarrassing to have the vehicle be a negative showcase to our department and country. Our aim is to make the San Pedro Police Department’s image friendlier and more professional to the public,” said OC Castellanos. The vehicle was sent to a garage in the San Pablo Area, it will remain there until repairs can be made.