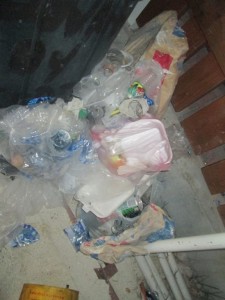 Residents neighboring the Honorable Louis “Cuz” Sylvestre Sporting Arena, commonly known as the Saca Chispas Football Field, are irate at the amount of garbage being left behind after The San Pedro Sports Committee Football Tournament and other events. According to residents’ complaints, which have surfaced on social media networks, the field is not cleaned after use and the mounds of garbage drift into other neighboring areas. The lack of adequate garbage cans in the area also adds to the dilemma. This past weekend in particular, the unsightly garbage was in larger volumes due to the fact that the field was used both for the football tournament and a softball tournament.
According to Kenrick Bracket, Councilor in charge of Solid Waste Management, both The San Pedro Town Council (SPTC) and The San Pedro Sports Committee (SPSC) have been made aware of this problem. According to Bracket, SPSC members in charge of the football tournament are not ensuring that the public picks up their garbage after they leave the field, nor are they providing garbage bags for people to dispose their trash in. “I am positive that Councilor Gabriel Nuñez, who is in charge of SPSC has informed organizers that the field needs to be cleaned up after the game, but since there are no officials in the area to regulate this, garbage goes uncollected,” said Bracket. “We will tighten up our cleaning efforts of the field so it looks presentable at all times. We will have workers clean the field throughout the week and ensure that trash is picked up after every game.”

Bracket also informed The San Pedro Sun that the SPTC will be receiving 200 garbage drums from an anonymous donor. Several drums will be placed in and around the field to reduce littering. The garbage drums should be in place within the next six to eight weeks. To enforce littering policies on the field, SPTC will also be posting up signs and implementing fines for those caught littering. “We know that garbage is a major problem, but it even more disgraceful to see a new complex being mistreated like this. There will be zero tolerance for littering in the Saca Chispas field and the entire town,” said Bracket.

SPTC urges those using the field to not litter. Be clean and pick up your trash!