The Saca Chispas football field in San Pedro Town will be renamed as the Honorable Louis “Cuz” Sylvestre Sporting Arena. The announcement was made by the Mayor of San Pedro Town Daniel Guerrero during the official inauguration of the San Pedro Sunset Boardwalk Project. Guerrero said that the decision to rename the field was as a result of the inauguration coinciding with the date of Sylvestre’s burial on Friday March 14th.

On Thursday, March 6th, the former People’s United Party member, parliamentarian for Belize Rural (including San Pedro and Caye Caulker villages), and minister, passed away at Karl Huesner Memorial Hospital from complications of a stroke he suffered in 2008. Since 1952 to 1984, Sylvestre has been involved in nationalistic movement and politics led by the Right Honorable George Cadle Price. While in government, Sylvestre was the Minister of Agriculture, Public Utilities and Local Government, and he also acted as chairman of the PUP for a long period.
He was well known and loved in San Pedro and Caye Caulker where he contributed to the growth of both islands. Amongst the many contributions was the acquisition of large private land for distribution amongst native local islanders in the 70’s, which gave way for town expansion via various subdivisions. In addition, he introduced electricity to the island through the first gas-powered generator that provided the island with electricity for a certain period at night. Most importantly, Sylvestre played a very important role in lobbying for San Pedro to become a town and in 1984, he signed the township declaration for the island.

After having issues with the PUP, Sylvestre created his own political party, but was unsuccessful and thus he became a member of the United Democratic Party (UDP). Before passing away, Sylvestre held the title of Honorary Consul of the Russian Federation. 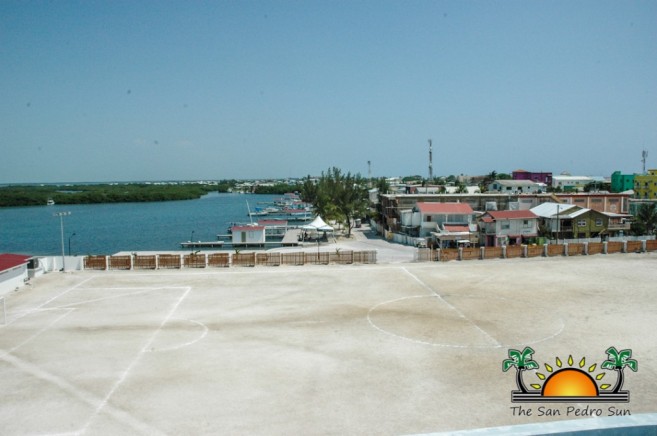 During the announcement of the renaming of the Saca Chispas Field, Guerrero asked for a moment of silence in honor of “Cuz”. “Sylvestre was a giant, a people’s servant and someone that was well liked by Sanpedranos because of the contribution he made to the development of this island. He was a friend of this island,” said Guerrero.


Sylvestre, commonly known as “Cuz” or “Louie” was born in 1931 and died at the age of 82. On Friday March 14th, a full state funeral was held for Sylvestre following a memorial service at the Holy Redeemer Cathedral. His remains were laid to rest in Caye Caulker village, a place he had fallen in love with.

The official renaming of the Honorable Louis “Cuz” Sylvestre Sporting Arena will be done at a date agreed upon and after consultation with the Sylvestre family.