« Older: A Unique Opportunity for Young Leaders to Be Trained in Road Safety
Newer: » Three Men Appointed to the Most Excellent Order of the British Empire


The first phase of the San Pedro Sports Committee (SPSC) Football Tournament is over and only the top eight teams advanced to the quarter finals. The lucky teams that still have the opportunity to win the first ever SPSC Football Tournament are Joker FC, Legends, Caye Caulker and Island Pure for Group A, and Southwind, FC United, Veterans and Dorados for Group B. Which teams moved on were decided after the games from weeks five and six. 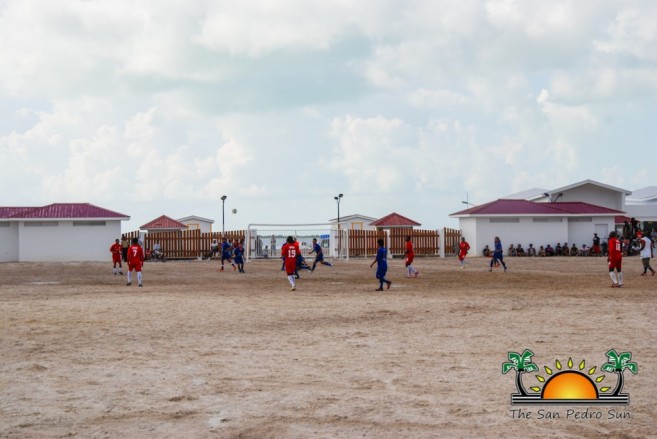 On Tuesday, March 18th, the first game was between Caye Caulker and Warriors. Caye Caulker delivered a blowout win in a 9-0 point game. Next to take the field was Southwind and San Juan. Both teams were eager for the win, but in the end it was Southwind who took the game in a 5-2 point game. The second set of games was played on Wednesday, March 19th. In the first match, Legends annihilated VH Ballers in an outstanding 15-2 point game. The second game was between Dorados and FC United. Edging out the competition from early in the game, Dorados delivered a win over FC United with a 2-0 point game. The final game of the week was played on Thursday, March 20th between Communicasiones and Island Pure, the game ended in a 0-0 draw.

Week six of games was played on Saturday, March 22nd and Sunday, March 23rd. The first of two games on Saturday was between San Juan and Costa Blu. It was a tight match until Costa Blu delivered a last minute goal winning the match in a 2-1 point game. That match was followed by a game between Island Pure and Legends, wherein Island Pure took the game in a 2-0 win. Three matches were played on Sunday. The first game was between Dorados and Veterans, which ended in an easy 2-0 point for Dorados. In the second game, Joker FC took on Caye Caulker. Both teams wanted a big win, but in the end, they had to settle for a tie with a 3-3 point game. The final game of the day was between Southwind and FC United, which also ended in a 1-1 point tie.

The final points for the first phase of the tournament are as follows: for Group A- Joker FC (1st) with 14 points, Legends (2nd) with 13 points, Caye Caulker (3rd) with 11 points, Island Pure (4th) with 11 points, Communicasiones (5th) with seven points, Victoria House (6th) with three points and Warriors (7th) with no points, for Group B- Southwind (1st) with 14 points, FC United (2nd) with 14 points, Veterans (3rd) with nine points, Dorados (4th) with eight points, Costa Blu (5th) with eight points, San Juan (6th) with six points and Caribbean Depot (7th) with no points. The top three scorers for the first phase of the tournament are Jordi Craft in first place with eight points, Jowel Banner in second place with seven points and Mario Chimal in third place with six points. 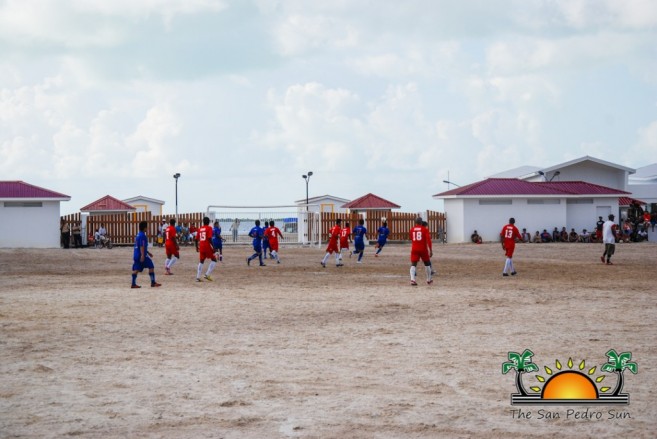 The schedule for the Quarter Finals is as follows: Week One: Saturday, March 29th: Joker FC versus Dorados and Southwind versus Island Pure. Sunday, March 30th: Legends versus Veterans and FC United versus Caye Caulker, Week Two: Saturday, April 5th: FC United versus Caye Caulker and Legends versus Veterans. Sunday, April 6th: Joker FC versus Dorados and Southwind and Island Pure.
Everyone is invited to come out and support their favorite team. Games are played at the newly renamed Honorable Louis “Cuz” Sylvestre Sporting Arena, commonly known as the Saca Chispas Football Field.

Photos:Scotia Bank brings joy to the children of San Mateo