As part of the Belize National Road Safety Demonstration project, the Belize Transport Department has donated a breathalyzer to the San Pedro Traffic Department (SPTD). The breathalyzer is a device used to measure alcohol levels in the blood using a breath sample. This device seeks to crack down on irresponsible driving and prevent traffic accidents caused by drunk driving. Mayor Daniel Guerrero of the San Pedro Town Council (SPTC) and Head of the SPTD Chris Nuñez were on hand to receive the breathalyzer during a short ceremony held on Thursday, April 10th at the Central Park to launch the “Don’t Drink and Drive” campaign.

The ceremonies started shortly after 10AM with the singing of the Belize National Anthem by San Pedro High School (SPHS) students Elina Palma and Martha Alicia Vasquez, followed by a short prayer by Clive Welsh. The program continued with a welcome address by Mayor Daniel Guerrero. He stressed the importance of driving responsibly, especially during the Easter Holidays when the streets of San Pedro become congested with vacationers. “Drinking and driving can lead to many accidents where not only the person drinking is harmed, but innocents as well. It is important to follow traffic regulations and to have a designated driver when out drinking,” said Guerrero. Guerrero also congratulated the traffic wardens on the excellent job they have been doing, but reminded them to work on their public relations. “The wardens are not here to be rude and unpleasant with the public, they are here to enforce the laws and regulations. I ask all the traffic wardens to approach motorists with cordiality. Of course if force and back up is needed, a warden reserves all right to contact the police or to enforce their authority,” said Guerrero. 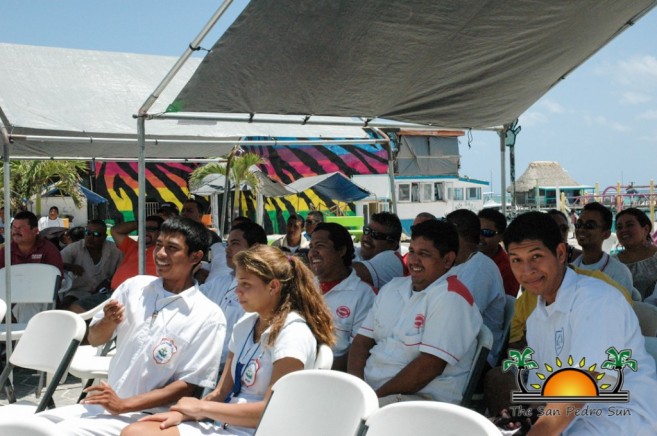 The event continued with a couple of testimonies from residents whose lives have been affected by driving under the influence. Rafael Torres spoke of his experiences while driving under the influence of alcohol and how at many times he endangered the lives of other without even knowing.
Following the testimonials, Head of the SPTD Chris Nuñez, and Town Council Accountant Marion Mejia presented the “Think Before You Drink: Don’t Drink and Drive” campaign. This campaign, which was launched simultaneously every municipality and city in the Belize, is part of the National Road Safety Project aimed to reduce mortalities caused by drunk driving. According to statistics, annually over 1.3 million people are affected worldwide by drunk driving. As part of the campaign, the Belize Transport Department has equipped traffic departments from across the country with a breathalyzer to crack down on drunk driving. According to the laws of Belize, a person conducting a vehicle should not have more than 80 milligrams of alcohol in 100 milliliters of blood (0.008). 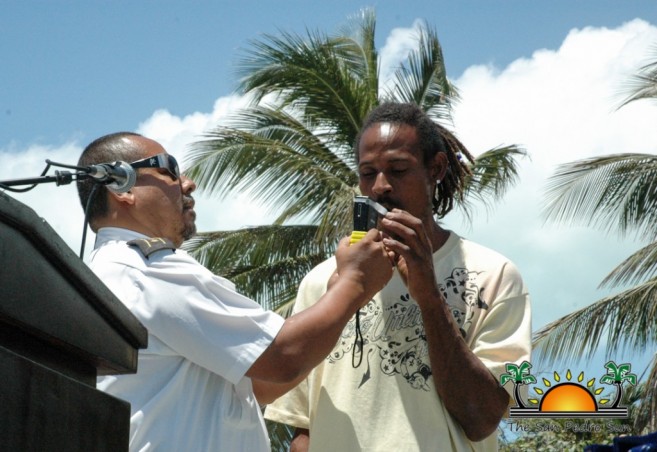 Driving under the influence can result in fines, the suspension of driver’s licenses, imprisonment and a possible criminal record.
Transport Officer Tirso Galvez demonstrated the proper use of the breathalyzer before officially handing it over to Mayor Guerrero and Officer Nuñez.