His Excellency Nestor Mendez, Belize’s career diplomat, was elected as the Assistant Secretary General of the Organization of American State (OAS). Also elected as the Secretary General of the OAS was Dr. Luis Leonardo Almagro Lemes, Uruguayan Attorney and former Minister of Foreign Affairs. The election took place at the 49th Special Session of the OAS on Wednesday March 18th at the OAS headquarters in Washington, D.C. His Excellency Mendez is the Ambassador of Belize to the United States, Permanent Representative to the Organization of American States (OAS), and High Commissioner to Canada.

Minutes after the historic election, the Office of the Prime Minister of Belize Hon. Dean Barrow released a statement in which he joins the rest of the Americas in congratulating Mendez. “[The Prime Minister] is pleased to announce that H.E. Nestor Mendez… was today elected for a five-year term as the new Assistant Secretary General of the OAS. The post of Assistant Secretary General is the second highest office in the OAS. It is a highly competitive post to obtain, and holds senior responsibilities in that hemispheric organization…This is the first time that a Belizean has been elected to such a senior office in the OAS.”
The release adds that the offices of the Prime Minister and the Ministry of Foreign Affairs embarked on two years of active diplomacy and campaigning to achieve the support of the majority of countries in the Americas for this post. Ambassador Mendez contested the election against Ambassador Bayney Karran, Permanent Representative of Guyana to the OAS, and secured the election with 24 votes against 10 out of a total of 34 Member States. 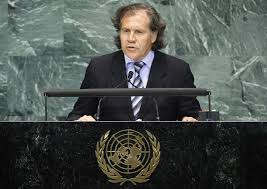 In his remarks to the OAS following his election, Mendez expressed gratitude for the overwhelming support given to him and Belize by the rest of the Americas. “I stand before you with a grateful heart, a clear mandate and an unwavering commitment to seize the opportunity that is before us, to work together to transform the OAS into the organization that we want and that the people of the Americas deserve. Thank you so much for making this, such an important and special day for my country and the Government of Belize.”
Mendez thanked PM Barrow and Foreign Minister Wilfred Elrington for nominating him as the Belize candidate for the post. “Belize – the effective bridge between Central America and CARICOM have an important contribution to make to the Inter-American system, anchored always on the fundamental principles enshrined in the charter of the OAS, the Inter-American Democratic Charter and the Social Charter. I am honored to reiterate that commitment to the Inter-American System and to the people we all serve,” said Mendez in his remarks.
Mendez told his OAS counterparts that more than ever, the organization stands poised to focus on that which unites the member states, rather than the issues than can divide them. “This is a task that can only be carried out together on the basis of dialogue, on the basis of respect for each other and with deep commitment.”
Ambassador Mendez will serve along with former Foreign Minister of Uruguay Luis Almagro, who was elected Secretary General of the OAS. They will succeed Secretary General Jose Miguel Insulza of Chile and Assistant Secretary General Albert Ramdin of Suriname, both of whom will conclude their terms this year. Both Mendez and Almagro received congratulatory remarks from their counterparts including the OAS representative from the USA, Mexico and even Guatemala.
H.E Almagro officially takes over the OAS Secretary General post on May 25th while Mendez will assume his new post on July 12th. The newly-elected leaders have pledged to work towards reforming and transforming the OAS into an organization that responds more efficiently and effectively to the needs of its Member States.

Photos:From El Divino to Pineapples- In pursuit of delicious lobster