The Prime Minister of Belize, Honorable Dean Barrow presented his eighth budget under the United Democratic Party government on Friday March 13th. Under the Revenue and Appropriation Bill 2015/2016 (Estimated Budget), the Government of Belize (GOB) plans to spend a total of $1.1 billion. Despite the increase of external debt and the 2.5% projected deficit, PM Barrow indicated that this year’s spending will see the “continuing of the transformation,” with even more infrastructural work across Belize. 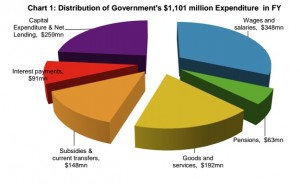 The figures presented by PM Barrow shows a budget proposal targeting a preliminary primary balance of 0% of Gross Domestic Product (GDP) and an overall deficit of 2.5% of GDP. Total proposed expenditure is budgeted at $1.1 billion, while total revenue and grants are estimated at $980 million. When taken together, this result, in the projected overall deficit of $88 million, which is the equivalent of 2.5% of total projected GDP. A further $86 million must then be added for loan amortization requirements, bring the total financing needs of the Government of Belize to $174 million.
The draft estimates has total revenue and grants amounting to $980 million for the 2015/2016 fiscal year, and is comprised of $934 million in recurrent revenue, $5 million in capital revenue and $41 million in grants. Barrow indicated that his government is projecting an increase in recurrent revenue that is expected to come from a boost in the collection efforts from the main tax sources, particularly Customs Duties, Income and Business Tax and the General Sales Tax. 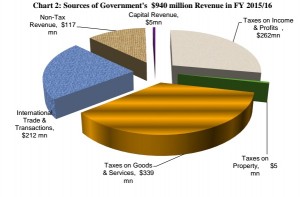 The draft estimates of recurrent expenditure is proposing a total of $874 million in recurrent expenditure, up by $32 million over the projected outturn of $842 million for the fiscal year 2014/15. Of this proposed amount, some $368 million is for personal emoluments, $60 million for pensions, $211 million for goods and services, $144 million for subsidies and current transfers, and $91 million for interest payments on debt. The increase in current expenditure is attributed to the increased transfers to schools under the Education Sector Reform Program; more provisions for medical supplies, the expansion of National Health Services to the Corozal District, and for the new 24-hour service of the Dr Otto Rodriguez San Pedro Polyclinic II; and to fund the additional intakes for both the Coast Guard and the Police Force. In addition, it will allow for increased allowances for the Police, thus putting them on par with the rest of the Public Service. 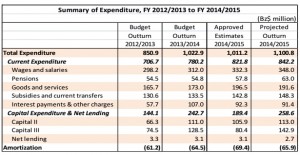 Inflation is expected to remain subdued at between 1% and 1.5%, as the lower cost of fuel in world markets is expected to continue to suppress the prices of a wide cross-section of goods and services in the consumer price index basket. The projection is for Central Government’s debt to increase by $102 million up to $2.7 billion, the equivalent of 76% of GDP in fiscal year 2015/2016. External or foreign obligations make up 85 percent of the debt, while the remaining 15% is from domestic sources. The 2038 Super Bond accounts for 48% of the external debt. The debt to Venezuela (PetroCaribe) is projected to climb to 14% of external debt in the fiscal year of 2015/2016, up from 8% in the fiscal year 2012/2013. A total of $177 million is earmarked in the proposed budget for debt service payments and is made up of $86 million for amortization and $91 million for interest payments.
And how does government plan to offset its financial needs? According to PM Barrow, it will service its deficit through several avenues including the disbursement of $40 million from loans already contracted with multi-lateral development partners specifically to fund Capital III Expenditure Program which includes projects currently in place; disbursement of $20 million in budget support financing from the Republic of China (Taiwan) under the on-going bilateral economic cooperation program; access to some $41 million in domestic financing; a further draw-down of the PetroCaribe financing in the amounts of $73 million.

PM Barrow explained that the underlying priorities for his government in the 2015/2016 budget are the continuation of other programs that were rolled out last year. “Our priorities for the Budget for the fiscal year 2015/2016 are similar to those in previous years, and this underscores the fact that even as we have delivered and accomplished so much, our march for progress is not yet complete. Accordingly, with this proposed budget, my Government will harness the resources of the nation to provide additional salary increases for public officers and teachers, and to further enhance the quality of health care, education and national security. In addition, the budget will continue the countrywide construction and reconstruction of sporting facilities, bridges, roads and highways, streets and drains,” highlighted Barrow. 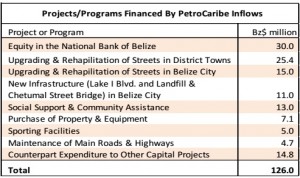 In terms of production, PM Barrow explained that hydro-electricity generation has been trending downward recently due to drier weather and petroleum extraction has been on its inevitable decline. GOB expects small growth in the production of sugar, citrus and banana. On the other hand, there has been improvement in the economies of Belize’s major source markets – arrivals of stay-over tourists are projected to grow by approximately 5% in 2015/2016.
The debate over the budget proposal will take place on March 26th and 27th, at which point, the opposition will have the opportunity to scrutinize GOB’s spending.

Letter to the Editor: Fundraiser for the Polyclinic