Stability in a time of Change: Barrow delivers 2016-2017 Budget address


On Tuesday, March 8th, Prime Minster Right Honorable Dean Barrow presented the official budget for the 2016-2017 fiscal year emphasizing “Stability in a time of Change”. Now in his third consecutive term as Prime Minster, this is Barrow’s ninth budget address. And even though several of Belize’s industries suffered crisis in 2015, Barrow is confident that the current and forecast state of the public finances of Belize are both “sturdy and stable”. 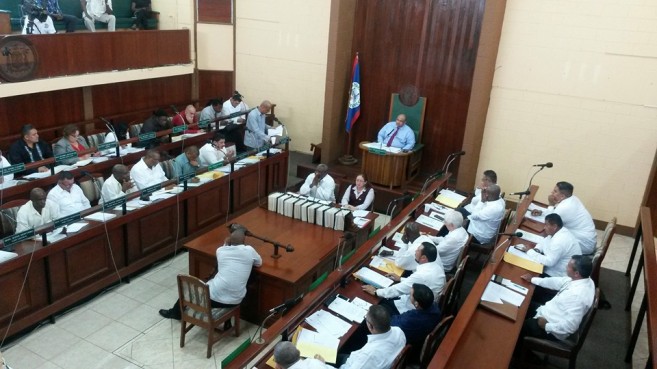 Before delving into the projected 2016-2017 budget, Barrow took time to explain how his United Democratic Party (UDP) administration has improved the country’s economy. “First, there is an unmatched string of year on year increases to the size and diversity of the economy. And this has been complemented by the longest post-independence period of low inflation, reductions in the cost of borrowing for both private and public sectors, and increases in revenue generation by the Government. Second, we have been architects of monumental advances in the wellbeing of the working class as measured by the lowest unemployment in a decade, and by the surge in real wages. I remind all that in the case of our 12,000 public officers and teachers, the salary augmentations amount, with this the third consecutive year of increase which I proudly declare now will take place, to almost 25 percent. That, by any measure and in comparison with any country anywhere, is absolutely spectacular. And complementing and buttressing this new purchasing power for the middle class is our robust safety net for the disadvantaged, including our signature BOOST and Food Pantry Programs, record education and health subsidies, and now an increase in SSB monthly payments to 8,000 pensioners. The third point to make in this context, is the unremitting swell of public investments in national infrastructure such as streets, drains, roads, bridges, sporting facilities, parks and playgrounds. When assessed in its totality over the nine budget cycles, this will have surpassed $1.5 billion and will have touched the lives of citizens in every corner of the country,” explained Barrow. 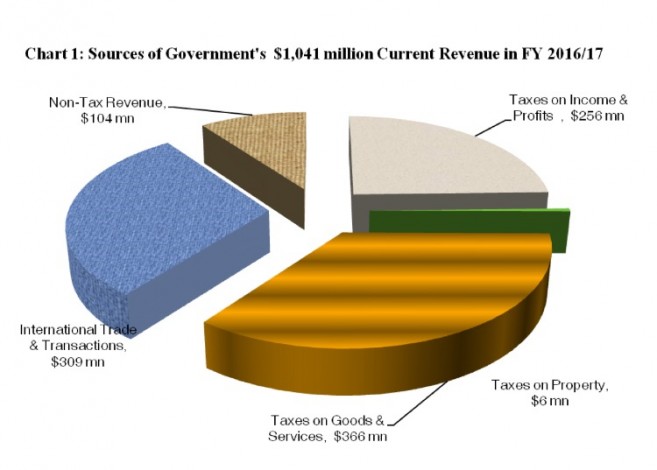 With a current Central Government debt of $2.852 billion, Barrow estimates that Gross Domestic Product (GDP) will grow moderately to between 1.5% to 2% in 2016 as the primary sector contracts further and activity in the secondary sector flat-lines. Belize’s debt is comprised of $0.514 billion or 18% in domestic debt, and the remaining $2.338 billion or 82% is derived from external sources. Barrow also explained that the Fiscal Year 2015/2016 alone saw an Overall Deficit increase of $180.1 million. $92.1 million of that deficit was incurred through arbitration payments, sport and infrastructure investments, which were un-programmed spending, and according to him, these deficits are “not only justifiable but commendable” to the country’s development. 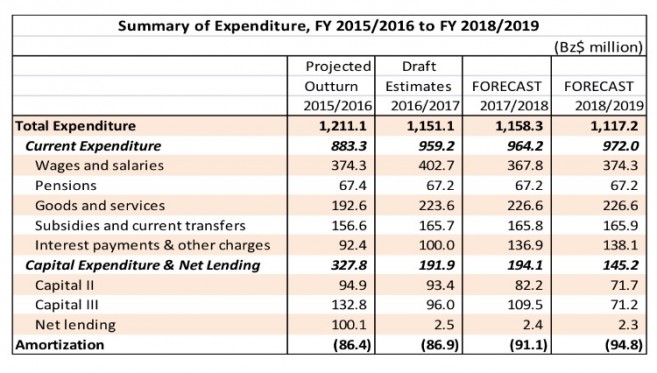 Barrow also touched on the PetroCaribe Loan Agreement. “Now a word or two on PetroCaribe as it has been so integral to the Government’s development program over the past four years. Since its inception, Belize has benefited greatly from the program and has received over $325 million… In the last financial year itself, we have drawn down about $55 for Road Rehabilitation, including Streets and Drains in Belize City and Main Towns, and $94 million for the Compensation Payments… In UDP hands, this PetroCaribe phenomenon has been so utterly transformative, so revolutionary almost, let me zero in on this point,” said Barrow. In respect to the future relationship of PertoCaribe and the 2016-2017 Budge, Barrow assured that Venezuela has refused to withdraw or alter the program and the support it gives to participating countries. 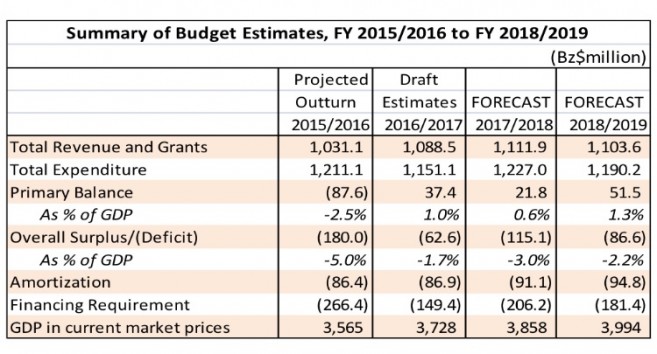 Looking ahead, Barrow is very optimistic, even though Belize’s top income providing industry has taken several hits. “Sugarcane deliveries are projected to rise by 23.0 percent due to Santander’s output. However, production of all other major export crops is likely to decrease. Banana output will be negatively impacted by the halt in the operations of the Meridian Group, and the major producer of papayas has signaled that production will be halted in August. Output of farmed shrimp will remain low as farms will only recover from disease and begin harvesting during the second half of the year. Manufacturing should decline with the anticipated drop in agro processing and the continued shrinkage in crude oil extraction,” said Barrow who said the service industry will make up for the losses in the agriculture industry. “But services will once again drive the economy, as tourism activities expand with a projected increase in stay-over arrivals. Distributive trade activities should continue to grow, though at a moderated pace.”

The 2016-2017 Budget will see many investments in streets, roads and bridges; in sporting facilities; in health and education; in national security; and, of course, in alleviating the conditions of the poor and the disadvantaged. “Even with the fiscal challenges we face, we are resolved at all costs to honor our commitment to the Public Officers and Teachers. We have therefore made a provision in the budget estimates for the further, and final, upward adjustment in their compensation packages in the new financial year. It bears repeating that the preliminary figures show that altogether, this government would have given its employees a 25% raise over three years. That we are able to do this at a time of fiscal consolidation is nothing short of remarkable and I am certain all concerned are properly appreciative,” said Barrow. 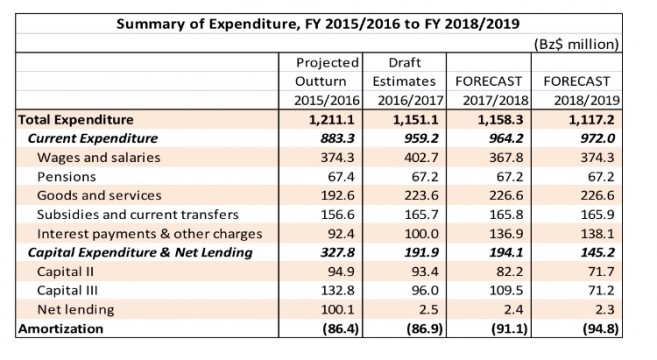 The proposed Budget targets a preliminary Primary Balance of 1% of GDP and an Overall Deficit of 1.7% of GDP. Total Expenditure is budgeted at $1.151 billion while Total Revenue and Grants are estimated at $1.088 billion. When taken together, these result in a projected Overall Deficit of $62.6 million which is the equivalent of 1.7% of GDP. “In projecting an increase in recurrent revenues, we have factored in the full year effect of the adjustment in Import Duty on fuel products which was implemented in December 2015 and in February 2016. This is expected to yield an additional $50 million to revenues… The Draft Estimates of Recurrent Expenditure is proposing a total of $959.2 million in recurrent expenditure up by $75.9 million over the projected outturn of $883.3 million for FY 2015/2016. Of this proposed amount, some $402.7 million is for Personal Emoluments, $67.2 million for Pensions, $223.6 million for Goods and Services, $165.7 million for Subsidies and Current Transfers, and $100.0 million for Interest Payments on the Debt,” explained Barrow. For the Fiscal Year 2016/2017, the forecast is for the Domestic Debt to increase to $0.718 billion due to the issuance of new Government securities to raise the funding necessary for the final settlement of the Belize Telemedia Limited compensation after the International Arbitral Award expected in the next few months.
Barrow concluded his address by saying that in the current circumstances this is a “bold Budget”. “It is the budget of an Administration determined, no matter what, to keep faith with Teachers and Public Officers, with poor people and the middle classes, with Business and Labor. By the end of this Parliamentary term, our goal is to oversee a thriving economy in excess of $4 billion; a national budget of more than $1.2 billion with annual investments in education, healthcare and citizen security having doubled compared to when we took office in 2008; and a business community and working class that is measurably more prosperous and productive,” ended Barrow.

New Voter’s ID ready for pick up on Ambergris Caye