After two heated public consultations and a media familiarization trip geared at explaining the proposed multimillion dollar eco-friendly resort development at Blackadore Caye near Ambergris
Caye, the project has finally been approved. The massive project, spearheaded by mega-star Leonardo DiCaprio and former Wall Street Banker Paul Scialla, received negative feedback from conservationist, tourism stakeholders and local fishermen, especially regarding the planned over-water structures. With the Government of Belize’s green-light, the project’s ground-breaking is set for 2017.
On Tuesday, October 25th via a press release, the Blackadore team announced that following a review of the project’s Environmental Impact Assessment (EIA), the Belize Department of the Environment (DOE) gave them approval for the construction of the Blackadore Caye Project. During a presentation that same day, the team announced the final development plans for the project. The final master plan has completely changed compared to its original design, which included over-the-water structures. Such structures had caused concern to residents and organizations on Ambergris Caye. The final draft of the project now includes the removal of all overwater buildings, putting an end to the fear of disturbance to the marine life around the island. 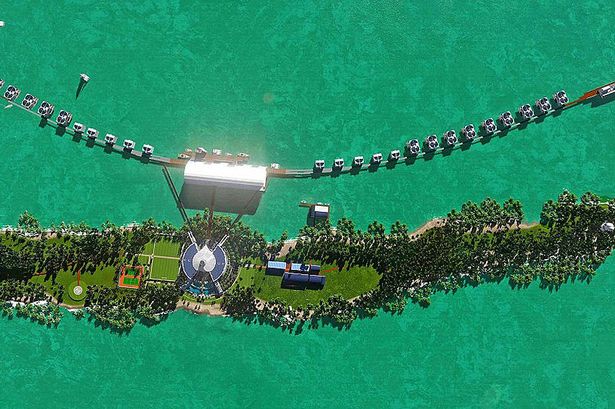 Many voiced concerns about the project’s plan to build 40 villas, luxury facilities and related infrastructure on the uninhabited island which is just 104 acres in size. Conservationists declared that the development is far too big for such an environmentally fragile zone. The other big concern is the fear that fishers will be barred from accessing popular fishing grounds around the island, which they and their forefathers have been using for generations. “It is difficult to justify the construction of so many structures on a small island,” said Dr. Aaron Adams, Director of Science and Conservation for the non-profit Bonefish and Tarpon Trust. He explained that what had mostly enraged locals was the idea of the overwater infrastructure that had been introduced at the beginning of the project.
A group of local citizens formed a group called ‘Defend Blackadore Caye,’ operated from a Facebook page with over 1,400 followers opposing the project. Alyssa Arceo, spokesperson for the group, told the media that she was happy with the recent announcement by Blackadore Group to remove the controversial overwater structures. However, she cautions that such promises have been made before and later reneged. “We are going to move forward with a lawsuit against the Government of Belize for approving overwater structures in a marine reserve in order to prevent Blackadore from reincorporating them later,” said Arceo.

It is known that Belize’s environmental laws do not allow overwater structures in marine reserves. This law was ignored when Blackadore’s resort plans included massive docks, hotel rooms, and a helicopter landing pad over the water. “Such a construction would irreparably damage the island’s marine habitat,” said Arceo. “At a public consultation, the developers acknowledged that their plans would hurt the environment, but said that it was worth it for them because it was the only way their project was financially viable.”
However, despite all the opposition and negative feedback towards the project, the project is considered by its developers to be the first of its kind in Belize, and signals an entirely new paradigm in sustainable development. According to them, the project will be built to some of the most stringent sustainability building standards in existence, and will aim to restore and revitalize the current ecology of the island.
The project not only has the approval from DOE, but it also has the blessing of Area Representative and Minister of Tourism and Civil Aviation Honourable Manuel Heredia Jr. “I definitely believe that the Blackadore Caye Project is something not only good for San Pedro, but for the entire country of Belize,” said Heredia. “Having looked at the project, I believe that it will be an example for our neighbours and the rest of the world.” He supports the idea that the developers are envisioning to do a project that is eco-friendly, by restoring the island and making sure that everything that they do at Blackadore is first class.

Speaking on behalf of the team, Dionne Chamberlain-Miranda, Public Relations Blackadore Group explained the change in the project’s original design. “The investors, despite the fact that they will be seeing a difference in the economic return, have made a decision that they are willing to accept that and ensure that there will be no over-water structures for sale or rent,” she said. “Let’s take note that over the next 20 years, there will be $200 million dollars in revenue, and the investment over the period for the construction phase will be up to $470 million dollars.” According to her, that is 25% of Belize’s Gross Domestic Product (GDP). She also added that after the project grows and develops it will contribute to over 3% of Belize GDP on a yearly basis.
Even though the original design of the construction master plan has changed drastically, the environmental soundness of the project remains paramount. In an effort to learn more about the waters surrounding the island, Jim Reilly, Director of Environmental Protection has begun a hydrographic study to determine the quality of water around Blackadore Caye. “We have a water quality instrument that we’ve been sharing with several of the other Non-Governmental stakeholders in our area of influence with the Sarteneja Alliance and the integrated coastal zone management,” explained Reilly.

“The aim is to try to capture water quality data around the country where there is a lack of data and thus is a lack of understanding because there is no data to compare against.” He added that they have purchased a very large hydrographic survey system that has been retrofitted to a boat. It is environmentally friendly, using the same technology as a depth sounder on any boat without disturbing the marine life.
The Blackadore Caye Development Group will be working alongside the managers of the Hol Chan Marine Reserve, as well as other government and environmental groups to ensure the island remains intact. At the same time, measures will be taken to enhance the natural habitats nearby. The team has also advised that employment opportunities will soon be announced for the construction of the project.