Five police officers from the Caye Caulker Police Formation and two island residents were awarded on Friday, August 31st for their quick response to a robbery in process at the Bridge Marina gas station in Caye Caulker Village. The incident took place on Thursday, August 23rd, where due to the quick response of the Police officers and residents, it led to the arrest of Daniel Hughes and a 16-year-old. They also confiscated a firearm, approximately $2,000 in stolen cash and a cordless phone. The five officers were John Sanchez, Anibal Castellanos, Arthur Young, Shamika Garcia, and Parcino Mckin. Arkel Johnson and Javier Novelo were the island residents who helped. 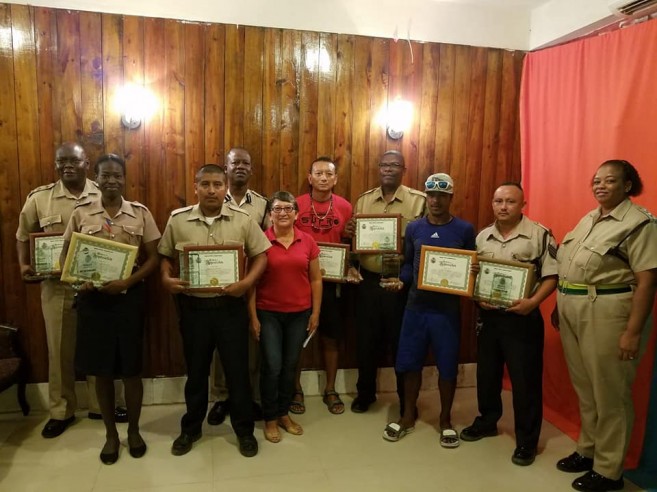 Joining the short award ceremony was Eastern Police Division Commander, Robert Mariano, Deputy Commander of the Belize Defence Force, Javier Castellanos and Chairwoman of Caye Caulker Village, Enelda Rosado.
Deputy Commander Castellanos stated the various officers and residents were awarded for their hard work in the community, as well as for their quick response to the gas station robbery. “It is good to highlight and show some appreciation for the hard work the officers and residents are doing in the village,” he stated.

Rosado also congratulated the officers and residents for their efforts in keeping the community safe while she issued certificates and tokens of recognition to the awardees.
Each officer and both residents shared their appreciation and committed to continue working hard for a safer island. The San Pedro Sun joins the community in congratulating the five police officers of the Caye Caulker Police Formation and residents for their efforts in ensuring the well-being of the community. To report any crime, please call the Caye Caulker Police Station at 206-0091.