To create awareness and help the fight against gender-based violence, the Embassy of the United States of America (US) in Belize hosted the launch of ‘Pure Love,’ Marie Sharp’s Fine Foods Ltd brand-new Pineapple Habanero Pepper sauce on Thursday, February 14th. This partnership aspires to combat said abuse by having all proceeds from the pepper sauce sales benefit Haven House, a non-profit domestic violence shelter in Belize City directly benefiting victims of gender-based violence.
Held at the capital city of Belmopan, the event was themed ‘Combating Gender-Based Violence through Partnership,’ and hosted at the residence of the U.S Chargé d’Affaires, Keith Gilges. The event also saw the presence popular Belizean entrepreneur Marie Sharp, Kim Simplis- Barrow representing the Special Envoy for Women and Children, Governor General of Belize Sir Colville Young, and Dr. Sharmayne Saunders, president of the Board of Directors of Haven House. 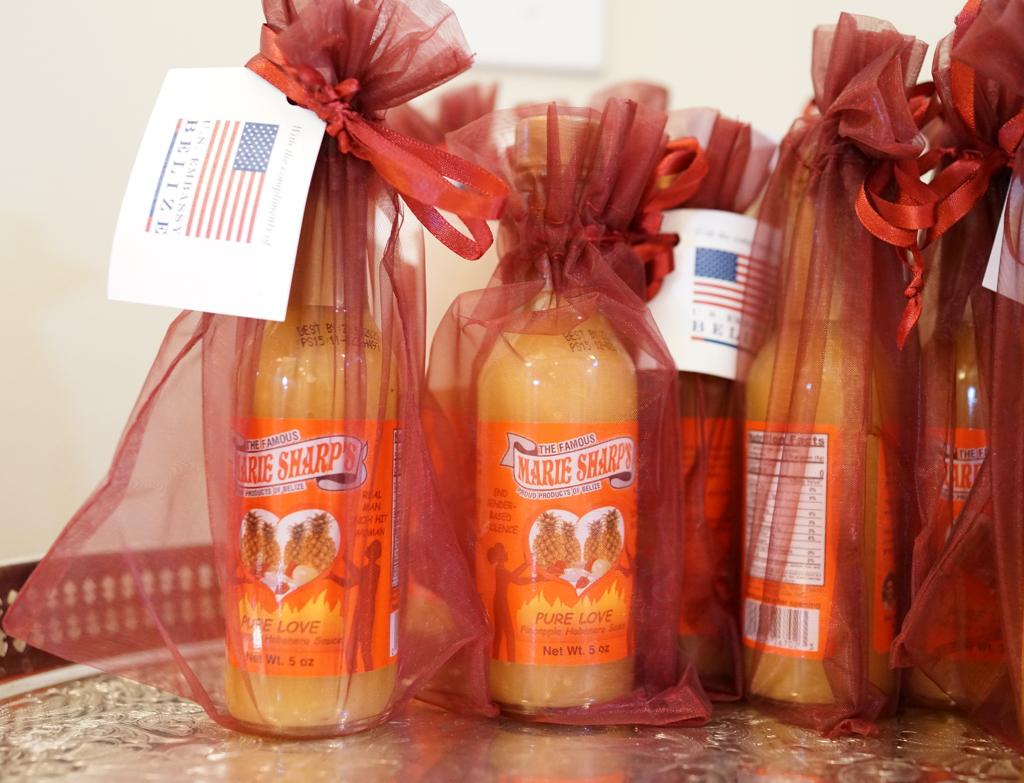 During the event, Sharp stated that she was approached by the Embassy with the idea for the gender-based violence campaign. She immediately thought about her new habanero sauce that had not yet been marketed. “Since I was not using it, I put it for the gender-based violence initiative,” said Sharp. “I thought it was one way of generating money fast enough because I know that every product, I put out there, is good and the market will accept it.” According to her, the Pure Love Pineapple Pepper sauce is made of only pineapple pulp and habanero. It is available in five-ounce bottles and hit the local and international market on Friday, February 15th. 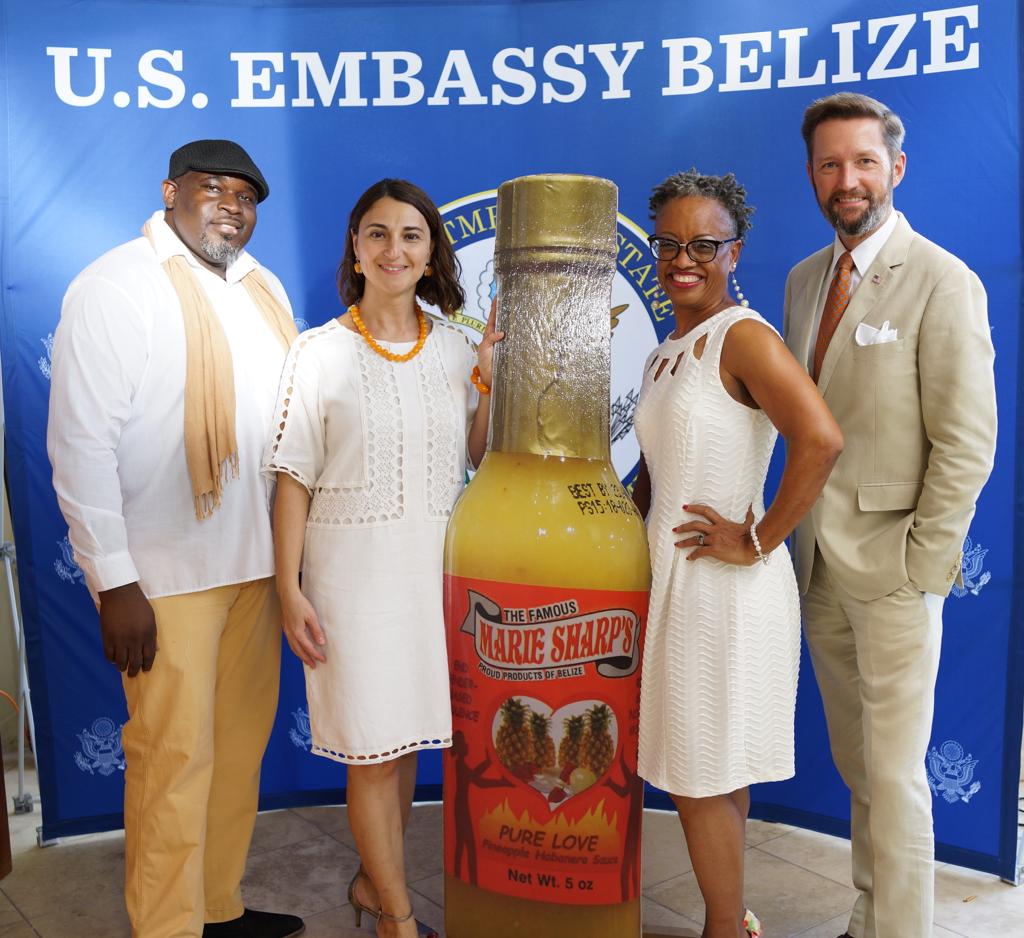 The U.S Embassy feels privileged to have in some way inspired this new product/program. Chargé d’Affaires Gilges indicated that such initiatives are part of U.S foreign policy and the embassy’s priorities in Belize. “Ending gender-based violence is critical to building resilient, democratic communities, supporting open and accountable governance, ending extreme poverty, and fostering vibrant economies and citizen security,” said Gilges. He emphasized the importance of strong partnerships. 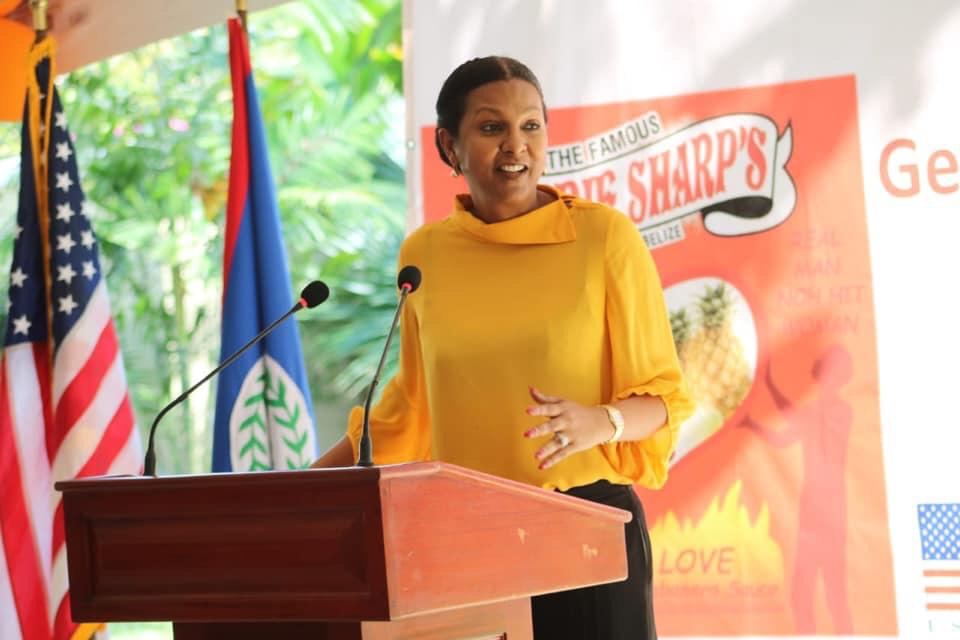 Simplis- Barrow stated that the new sauce represents an entirely new approach with a completely dynamic angle. “I hope it will fuel us to understand the magnitude of gender-based violence and how much of an impact it has on the entire society,” she said. The head of the Special Convoy for Women and Children added that the initiative signifies communal support to survivors, those currently affected and to those whose lives have been taken. 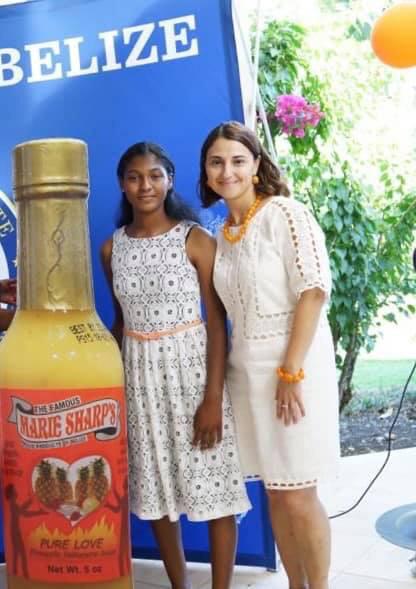 Haven House President Saunders, thanked both Sharp and the U.S Embassy for including her organization as the beneficiary. “The Haven House has provided emergency accommodation services to over 1,300 women and children,” said Saunders. “Adult residents at the shelter have ranged from the age of 18 to 60, while child residents range from three days old to 17 years.” She added that the shelter works by referrals either via the police, the domestic violence unit within the police or by the Women’s Department. 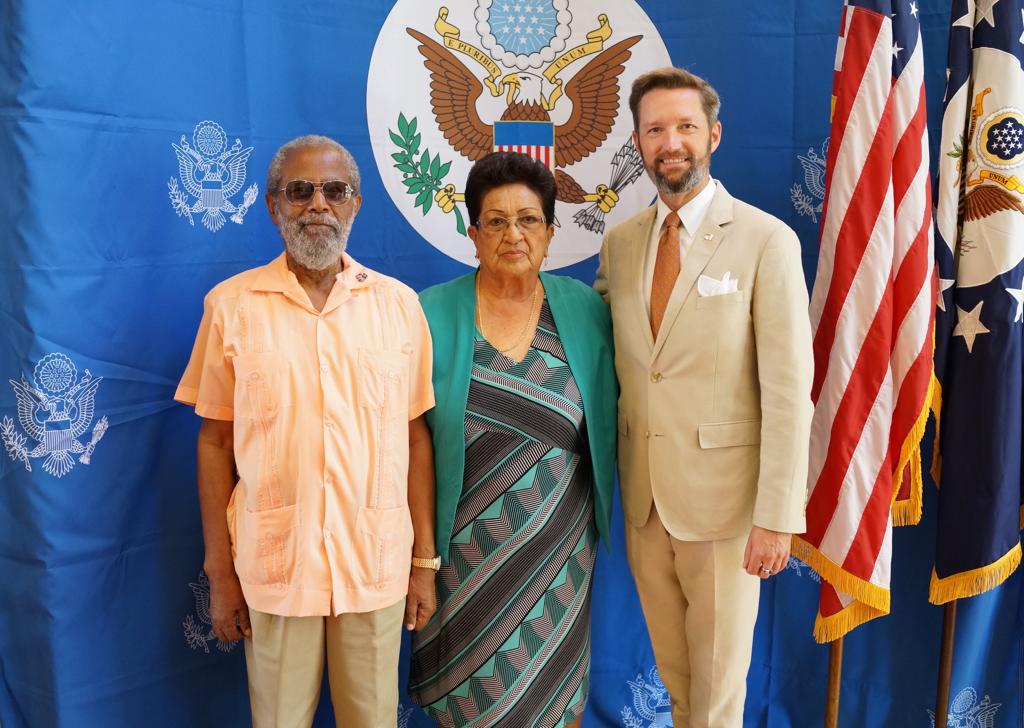 The partnership behind Pure Love goes beyond the U.S Embassy, Marie Sharp’s Fine Foods Ltd, and Haven House. The goal is to reach as many homes as possible and spread the message that gender-based violence must end. The entities involved believe that Belizeans will see the benefits it will bring to households, communities and the entire country.

Stingrays – worth more alive than dead!